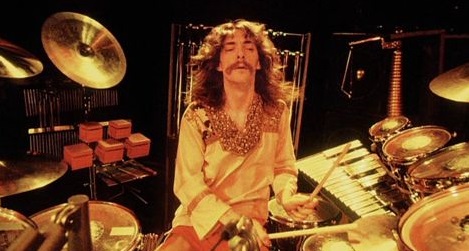 Neil Peart was not only a great drummer for the great Canadian 3-man rock band Rush, but he also wrote lots of lyrics, with Libertarian and science fiction themes. You don't find that in your average band, even from the era of good music - Rush was not your Average White Band. He died at 67 years old.

Oh, there were plenty of artists and bands that claimed to be for freedom, back in the generation producing the great music of 1960s and 1970s, but, unfortunately, most of them just wanted to be free to smoke dope and not work for a living, damn boomers.

I'm not sure there is any in-between, as between Rush's Geddy Lee's high, sometimes squeaky voice, and the unusual themes, maybe too nerdy for your average rock fan, people either seem to like them or can't stand them. Though enjoying the music of Geddy Lee (singer, bassist, and keyboard player), Alex Lifeson (guitarist) and Neil Peart (drummer), at the time they were at their peak, I was not allowed to go to the venue in which they played at least once. #SAD. I did know a guy in college that was such a big fan, he had a big Canadian flag in his dorm room. "Are you Canadian?", I asked. "No, but listen to this..." He had me put on a headset and listen to Limelight, from their fairly-recent at the time Moving Pictures album. Man! (I didn't go out and buy a flag though, never really got that part...)

With those far-out Libertarian themes, Rush was really into making those concept albums (though the ELO album Time is still my favorite). Peak Stupidity has featured the title song from one of these, A Farewell to Kings before, along with Closer to the Heart from the same album. The latter song also has a somewhat political theme, and we have it at the bottom of a post about Ayn Rand (go figure!) A listener new to the band may not appreciate this first 20 minute album side from Rush's concept album 2112, but give it a try.

If you watched that comic-book video, whom do the Priests of the Temple of Syrinx remind you of? Well, the organization sounds like google/youtube to me. Back when I was young and Rush was young, the year 2112 seemed to be the far distant future. It's 92 years ahead now.

This next song is much more conventional. I don't see how one could not like Limelight:

Rush was a really "tight" band. All those split-second or longer stops with the music starting back precisely together are hard. As one of these 3 great musicians, Neil Peart went all out with his drumming and his sound. At one point he had a 360 degree drum kit surround him. His equipment often consisted of as much as 50 pieces of percussion instruments in the set including per Wiki, "iorchestra bells, tubular bells, wind chimes, crotales, timbales, timpani, gong, temple blocks, bell tree, triangle, and melodic cowbells." Nobody, but nobody, would have had the gall to tell Neil Peart "it needs a little more cowbell"!

I will have to get on youtube and find some of their music that I haven't yet heard. All the live albums are said to have long drum solos in them, if you want to hear the sound of Neil Peart alone.


PS: After reading the Wiki article on some personal stuff, it turns out Mr. Peart had a turn in the wrong direction politically too. "A bleading heart libertarian" who changed to voting for Democrats. What are you gonna do? I don't think he made a big thing of it, anyway.

Moderator
PS: Lucky you, Dtbb. BTW, I updated the post just a little bit, as I had read about this big drum kit yesterday, and your comment reminded me about it.
Dtbb
PS:I saw Rush four times at the Lakeland Civic Center. They were big baseball fans and came for spring training every year. Unbelievable the sound those three guys could produce live. They were also innovative with large screen videos to go with certain songs. Not many chicks at the shows though. Neal had the largest drum kit I ever saw. You name it, he had it and could play it skilfully. RIP