We must give up our rights, or the terrorists will have won! 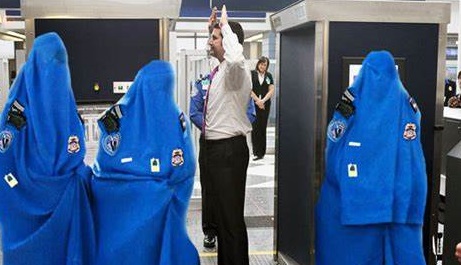 (Yes, this is a joke photo, but this post is no joke.)


The TSA was formed as part of the US Department of Motherland Security as "a response" to 9/11. Yeah, and somehow many of the details of the "Patriot", spit, Act were just about ready to go right then too, amazingly enough. I do use that name for this Chief-Executive controlled Cabinet-level agency in this disparaging manner as just the name alone disgusts me, not to mention the whole idea. If you went back to just 1980 or so, you would find that for most Americans, a name like "Homeland Security" as Communist/Nazi as it sounds, would be found disgusting by your average American. My, has the stupidity level risen!

I want to state, here, near the beginning of this post, that the 9/11 attack will not be discussed in this post, and in fact, I'll have another post coming just to discuss how I won't discuss much about this on Peak Stupidity period! Yes, that sounds cryptic, or weak, or whatever. The thing is, were I even to get into a paragraph or two of why I WON'T discuss it, then I'll end up raising the questions anyway. (I've already thought about it, and, sure enough, 2 more paragraphs are needed just for that.) Suffice it to say, for this post, that I do think the US Feral Gov't, or at least evil men behind the scenes, are indeed capable and quite willing to carry out nefarious deeds such as what happened on Sept. 11th, 2001. That's not something I would have believe back on morning over 18 years ago. The US Gov't is very obviously capable of taking advantage of the fear and emotion that 9/11 resulted in, either way.

OK, so purportedly, without getting into anything more about it, those terrorist attacks require America to become enough of a Police State to stop further such events. The majority Americans were too scared or ignorant (often just powerless) to stop the implementation of the obvious perpetual violation of their Amendment IV rights that prohibit the US Government from conducting unreasonable searches. "No wait, they got a good reason now", one hears, or "it sound pretty reasonable". Bull. The Constitution is quite clear about it. The reason for a search of an American citizen's person or positions must be enough of a reason that a judge has to get involved, with a search warrant signed. The TSA employees violate the Constitution over 2 million times daily. Other than those few very infrequent flyers that are shocked when the show up at the airport, Americans have been almost completely inured to this travesty over the last decade and a half.

Yes, it's gotten to the point that I am even friendly with a few of the people there that I see often. I try not to put my anger against the whole operation on the individuals, as I have done in the past. However, that's pretty much what it would take to ever put an end to this. Knowing the way people think now, it'd take really hard times and angrier Americans for a change to happen, and by that time, possibly airline flying would only be possible for the elite anyway.

At the airport recently, as I was "screened", as in illegally searched, one of the employees of this TSA outfit was a Moslem woman with the hijab. At least, that's what I think the term is - this thing doesn't have slits but just covers the whole head excepting the face, in the fashion of that incandescent-headed ungrateful congressbitch out of Minnesota. Hey, what's my complaint about Agent Hijab vs. all the rest of these people doing the same job, anyway?

I doubt 1% of TSA agents wearing the hijab would be up to no good, right? That's only... well, I don't know how many, and we ought not to profile. Any clean-shaven white man in a nice business suit is just as likely to take over an airplane, put destructive devices in the cargo hold*, or become a mechanic and mess with the instruments. That's what they tell us. We shouldn't discriminate against the people that coincidentally resemble, and my happen to come from the same part of the world as, the 19 people that took over 4 airliners and caused > 3,000 American deaths. That's not whom we are!

Come to think of it, while 99% of women wearing these get-ups are not likely up to no good, I'd say a good 100% of them, though, are not fitting in in America. What ever happened to that "do as the Romans do" bit? Was that just for tourists. I know that this woman in the headgear is not an American to me. What is she doing in the country to begin with, much less searching through my shit?

Yet, I'm supposed to submit my body and possessions to a search by this lady from Allah-knows-where, because they are doing this important job, worth violating a few measly Constitutional rights for, to stop any more Moslems for busting up any more buildings. See, it's hard for me to think the way Big Gov does. I guess I'm just not smart enough.

Let me interrupt here and add - I'm just going by the American Feral Gov't's storyline here. Though I don't like the cultural aspect of immigration of Moslems, I don't necessarily buy the US Government story. It's an excuse for the Police State that we now live under. As for the Moslems, the American military has been killing so many people in the Moslem lands, that lots of them DO have a reason to be angry. Therefore why would we let MORE OF THEM IN, though?! The thing is, the Feral Government wants us to believe that bit that the Moslem terrorists are the problem, but somehow it's still great to have them immigrate and even work to ensure our Motherland Security. Big Mother knows best, and you'd better get on-board with that, or you won't get on-board any airline flight, for starters ...

What you and I, and other real Americans need to do is to get our "cognitive dissonance" levels up higher. This means, in good Big Brother fashion, we need to keep opposing thoughts in our heads and believe them all. It's not just for the ctrl-left anymore, this cognitive dissonance. No, "our" Feral Gov't wants to make sure that we all can do this. Watch:

Yes, we need to quit worrying about our privacy and rights. Yes, it's for our own good, otherwise these foreign terrorists may do it again. No, traditional Americans are no less suspect than anybody else. Yes, this lady has just as much a right as you to be here. Yes, she is a Moslem, but that doesn't matter. She needs to search you, or you can't get on that airliner. It's for the security of our Motherland.

And no, I didn't do anything about it, even snapping a photo, the latter simply because I didn't have a good opportunity. That is true, but if I'd said WTF and just stood there snapping the picture, I'd have gotten into it with them and not made the flight. I'm waiting to pick my battles, as a kid 1/2 my age advised me one day long ago. Were a coupla dozen other Americans on-board (well not getting on-board, I guess) that day, with a plan to disrupt the whole shitshow, well that is something I could see taking part of. It's like I've written time and again: There's great power in numbers. It's all a matter of what one has to lose, but in greater numbers there is much less to lose.


* Ramp employees at MSP (Minneapolis/St. Paul, Minnesota) airport are about 50% Somalian. Do you remember when lots of people had this irrational fear of flying? It may be making a comeback.

Ganderson, I thought that was a joke coming. I was being the straight man.
Ganderson
PS no idea.
MBlanc46
PS TSA is probably not the hill we should choose to die on.
Moderator
PS: I don't know, what IS the difference between Vegemite and Marmite?
Ganderson
PS After he confiscated the Kalle’, he just smiled and gave me a Vegemite sandwich.

And, while I’m on about it, what’s the difference between Vegemite and Marmite?
Moderator
PS: Haha, it can't be more disgusting than vegemite, can it? Vegemite should be confiscated by customs men at the border, just as a national safety issue.

A guy I know told me he froze up his water in a water bottle - it's no longer a liquid or gel. I'm not sure how that turned out ... haven't heard from the guy ...
Ganderson
PS I found out this Christmas that one can’t take Kalle’s Kaviar spread in your carry on. Admittedly, it IS pretty disgusting.