(The first post on this book was an intro., but I'd better make this Part 2 for keeping track.) 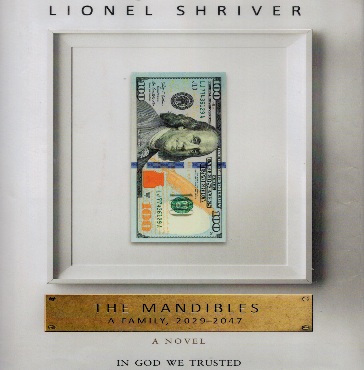 "Mandible" is the family name of most of the characters in the book. The author features 4 generations of the Mandible family, starting with "Great-Grand-Man", as they call him, one Douglas Mandible. He is the old family patriarch who lives in a nursing home at the start but is completely lucid and still taking care of his 2nd wife, 2 or 3 decades younger, but demented. Douglas Mandible has invested the fortune from his ancestors wisely, so early on in the book, there is mention of his fortune helping the next generations after he passes.

Then there is his son Carter, with his wife Jayne, parents of two daughters and a son. The son Jarred is mentioned as some hippy-radical, but not present in the story until the very end. The two daughters, Florence and Avery play big parts. I'll get back to them and their husbands (oops, "partner" for the former) and children in a bit. I mentioned in the week-ago post Hey, you t-t-t- talkin' 'bout My g-g-g-generation? the disparagement of the Boomer generations. This book is the one alluded to in that post, and I refer to the fictional couple Carter and Jayne. Like a lot in this book, it's hard to tell if the political opinions belong to the author herself, or are just part of the characterization and the general discussion of economics, important to the storyline, throughout it.

The animosity toward Carter and Jayne, along with their whole g-g-g-generation has partly to do with the economic situation. They and their cohorts are seen as selfish and (not sure from the reading) a part of what caused the economic downfall that is the subject of the whole book. Again, this is possibly just Miss Shriver's prognostication of what 10-15 years-hence Americans will think of that crowd. If she's gonna write this stuff though, I gotta nitpick again on the names, because, dammit, couldn't she have picked Boomer names for the Boomer couple, not ones that are used by the Millennial generation for THEIR children? Peak Stupidity has a real bug up our collective ass about these last-name first names that have been picked for kids, I'd say, up through 15 years old now and still coming (see "I should have named him after a man of the cloth" and elsewhere). "Carter" would, in fact, have been a good name for the 90-odd y/o patriarch, as it sounds like one from that era, and his Boomer son, along with his wife with the modern "Jayne" spelling should have regular old names, Doug, Bill, Sam, Harry, Sally, Dick, and yes, Jane, but spelled right. Sorry for the rant, but it just seems like the author is not on the ball with this stuff.

What the author nailed pretty well with the 2 Boomers, however, is that Carter and Jayne insist their grandchildren (4th generation) call them those names rather than Grandpa and Grandma. That is one trait that the book delves into, that the Boomers refuse to believe they have become old. It is kind of a running theme.

Speaking of names some more, the 3rd-book-generation daughter Avery has a teen-age daughter Savannah, very appropriate still for being born in book year 2014 or so. She and her husband Lowell have 2 boys named Goog and Bing. Yes, I get it, people really loved their search engines. Too bad there wasn't another baby boy named Duck. Seeing as Lowell is an economics professor, very appropriately for this book, as I'll get into later, he should have named them Maynard and Friedrich. The latter would be the one he'd whip daily, I guess - you'd understand if I'd explained this guy's economic stance throughout the book.

OK, as to the story now, Florence seems to be the main character of the book when you first start reading, and the story starts with the family life of her, her partner Esteban, and their son Willing (I don't know). Esteban is Hispanic, obviously, who are called "Lats" in 2029 ... terminology. It's probably a pretty good extrapolation to have the Lats be a big influence in America by this time, barring President Trump doing his job, but there are a few things I'd argue with right away. The story has them being a big part of the American power structure, as the new President is a Lat no, not Dwayne Elizondo Mountain Dew Herbert Camacho*, but President Alvarado.

That whole Lat thing doesn't really click. From what I read often on Steve Sailer's blog, other than the few La Raza trouble-makers, the Hispanics in America are kind of apolitical. They don't vote in numbers close to their share of America's population (if they did, we'd be in even worse trouble ...) Yet, they were supposed to be running things in the late 2020's... nah.

As we meet the small family of Estaban, Florence, and their 13 y/o boy Willing, we find that they are living in a very small house in Brooklyn, NY in an economically-decaying America. The gray water from the shower must be used for washing dishes, showers must be quick and are rationed, the meals are stretched thin, and both Florence and her partner work in low-paying service jobs. (Estaban's job** is taking rich old Boomers on expeditions into the wilderness, as they still want to pretend they are young.) The fact that Florence went to a fancy Ivy League school for some humanities degree that she doesn't use working at the homeless shelter makes her a bit envious of her sister Avery, with her therapy practice and Econ. professor husband Lowell. The deal is that all Americans except many of the rich Boomers are getting behind, though, and the country is slowly breaking down (hmmm, no mention of the Lats' effect at all...) The 2nd and 3rd generation Mandible family member still keep the big inheritance money from "Great-Grand-Man" Douglas in mind.

America is slowly sliding into near-3rd world conditions economically - that's the impression given. There was also something called the "Stonage" that had happened 5 years before (the younger ones insist it's not Stone Age, but one word pronounced "stow-nidge") "The Day That Nothing Worked" was what the book called it, and the reader finds out later that the internet was down. That's pretty reasonable, that the internet going down could cause a lot of havoc in our complex society, to where it would take a long time to recover. In this novel, it seems there will be no complete recovery. Perhaps Miss Shriver really missed something,as she never did explain this "Stonage" later on in the book. It's the kind of story in which you find out things slowly sometimes. That's a good way to keep reader interest, but I'd have liked to see this event explained too. It could have fleshed out the author's take on how things got bad so quickly.

For a prepper, one would want to prepare for something like this, such as the EMP event that was the subject of the other prepper novel reviewed here, One Second After. Many who look into America's future see something like Brazil. The economy is half-assed, the country is full of people of varied ethnicities/race to where there is no trust, and things don't work well. (Again, there's nothing immigration-related in Lionel Shriver's take ...) That's a distinct possibility for us, but it's one that you really can't prep for, unless your plan is to bail out completely. Things just slowly turn worse and worse, and it's widespread and kind of hopeless.

That's the basic set up at the beginning of this book, and it's depressing enough. There's MORE, though! I want to get into the further economic happenings in this near-future America of the novel The Mandibles, with all its discussions by the characters, as if they were graduates students at a seminar, that very much apply to the lives of the characters. The novel comes up with much food for thought for preppers too. It's important because this stuff applies to real America. 2029 is right around the corner.

More on this book next week, but I'll try to mix in other posts too.

** Oh, and Esteban helps with the dishes and other housework. Haha, I don't think this lady knows completely of what she writes then. Even though he's a Lat born in America, the Hispanic men are kind of macho, and I really don't see this as any kind of believable thing in the future. It's just another small error in the book.

Moderator
PS: Thanks for the comment and, more importantly, for reading, RC. I've agreed with you 95% of the time when reading your unz comments.

Well, I'll tell you, you may want to make the conscious effort to skip at least the next few posts on this review, as I'm bound to spoil the book for you. Please wait until you are done. It's kinda nutty having 4, maybe 5 posts as a book review*, but there's really a lot to say about the economics and prepping stuff in it.

* and it's not like I'm running out of material - got quite a bit built up just from the last coupla days.
RadicalCenter
PS I discovered you on Unz.com and just visited your blog for the first time. Love it! I ordered The Mandibles on The Derb’s suggestion and appreciate your reviews as well. Thank you.