Peak Stupidity used our generous funds donated by our bloggers to send our one and only lead blogger to the gun rights rally in Richmond, Virginia yesterday (01/20/2020). I'll write another post on the narrative build-up in the days before the rally, but please realize that the VCDL (Virginia Civil Defense League) has been running this rally/meeting-with-reps at the Virginia State House on the day of the beginning of the legislative session for YEARS. This was not something new, and not something designed to particularly interrupt other festivities related to the bullshit MILK Feral holiday.

There was a big crowd. Before I heard other estimates, my guess from a pretty good vantage point (of the main area, though not including all side streets) was of 10,000 people at least, -50% to +300%, because sizing crowds is not something I'm an expert at. I've heard afterwards that there may have been 20,000, but, then again, you'll hear all kinds of numbers from all kinds of estimates. I'll state this from 30 minutes of looking at pictures searched on the web later on. There was definitely an effort by the Lyin' Press sites to minimize the apparent crowd size. Here you go: 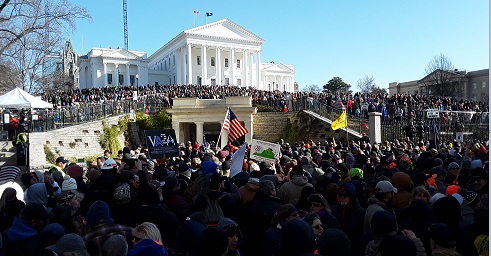 The areas that are bare in pictures are areas that are blocked of, with an exception of the grounds inside the fence at the State House. Very close to the rally day (maybe the day before or that morning) it was announced that those inside that fence would be screened. (Yes, it's unconstitutional.) This kept out anyone who was carrying arms, along with plenty more who didn't like the idea and/or were pressed for time. All the other areas were FILLED with good-natured, civil, 95% white supporters of the US Constitution, particularly Amendment II. 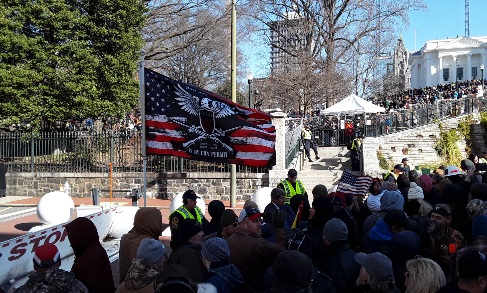 That view is to the north. The flag says: "The Constitution is my gun permit". 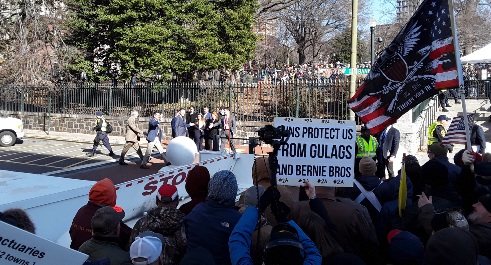 The Virginia State Reps, all of whom I've gotta admit, I don't know the names of, came walking through the clear area from the NW. I believe they were all GOP, or at least not anti-gun nuts, as they got cheers, and most of them wore orange "Guns save lives" stickers, as did lots of people in the crowd. Most came toward the crowd and shook a few hands. 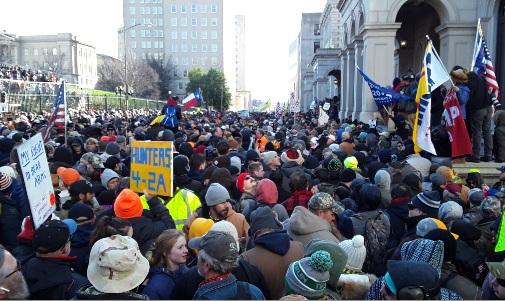 That photo is looking SE, and shows just how jammed-up this portion of the crowd was.

Does anyone think it possible that this group of gun-rights protesters could have been Charlottesvilled? In Charlottesville, it was pure Anarcho-tyranny (as detailed here and here). All the establishment, the Lyin' Press, the local government (Federal government too, when it comes down to it), and local police, were on the side of the antifa Commies and against the few dozen trying to have a peaceful assembly to simply speak in support of Southern heritage and a statue.

That wasn't quite the situation in Richmond, Virginia, but it could have been that way, had there been 100 people or so. No, it's not all the guns, but the numbers. Yes, having one in 10 people (just a rough estimate by me) openly armed* with ARs or other rifles certainly beats a completely unarmed crowd, but the hippies in the 1960s, in crowds of 10's of thousands, did OK, too.

Are there enough handcuffs in Richmond to take these people all in? That's written in jest just from a sign I saw. Really though, it's not possible to arrest them all. How about a big push by cops with shield and beat-down sticks? Can you really push that crowd around? Most would try to comply for a while, just to avoid a bloody mess. However, at some point, armed people will realize what I've just read on a sign - "The 2nd Amendment is there to protect the 1st"**, is becoming their reality. Not many really hope it comes to that, but the stage would be set.

Sure there were helicopters in the air, 4 of them at one time that I saw. They were there for observation. Attacking from the air with the military wouldn't work if the people were mixing it up down there. Were the police, many who were likely on the side of the good people rallying in Richmond anyway, to really start something violent, they would likely regret it soon after.

It was a nice cool morning, a great crowd, and a successful rally. No matter how much insulation that old Virginia State House may have, I'm sure the patriotic American people were heard yesterday.


* There could have been many more than that carrying concealed. I'd hope so, in fact.

Jimbo
PS: For post on pre gun rally discouragement by the Lyin Press:

https://www.13newsnow.com/article/news/crime/suspected-members-of-neo-nazi-group-virginia/65-af0b4194-5eb8-4282-8d08-ecfd3240a328
Moderator
PS: I'm glad to have gotten out and helped, as little as it was compared to the huge crowd of good Americans.

The'll be few more posts on this, but I've got plenty more stuff in mind too.

Thanks for writing in, roving commenters.
MBlanc46
PS Thanks for the report and the pics.
Dtbb
PS:Hear! Hear! BernCar and the PS correspondent!
BernCar
PS: I salute the PS roving correspondent for having the principle and fortitude to go to the rally. Good for him!