Blast from the past - Disgraced fake historian Michael Bellesiles

A commenter on a Steve Sailer thread on guns, gun violence, and gun rights brought up a real blast from the past just now. The comment jogged my memory of reading Instapundit almost hourly back then, and he kept his readers updated on the story of the lying historian Michael Bellesiles and his book Arming America. Its been almost 20 years, and if I were to wait toward the end of this year, the publication date, to celebrate, I'm absolutely sure I'll forget about it. Yes, there was actually some pushback from real historians, even on the lefty side, back 20-16 years ago, against not just historical inaccuracy and slight exaggerations, but work that was supposed to be scholarly and well-sourced but was sourced only by the author's left-wing bias and flat-out lies.

In Arming America, Mr. Bellesiles supposedly "debunked the myths" of early America having had a big gun culture, going back to the patriots of the Revolutionary times. It was almost all a load of horsecrap, which would have been fine if it were just a book advertised to be of opinions, not rigorous history. The former Emory University history professor went way too far in pushing his narrative, as he did quote many sources, later "determined" to be lost afterwards due to flooding in library basements and that sort of thing.

On a site called Intellectual Takeout, a writer named Chris Calton wrote "What the Fake History of Guns Can Teach Us" just over a year back. It has a recap of the whole Bellesiles scandal. Wiki has as pretty fair summary of the whole sordid affair too. Just as the US Gov. Eric Holder-led DOJ scam was exposed by a couple of bloggers, as Peak Stupidity described a few weeks back, it was a historian, software developer, gun enthusiast blogger named Clayton Cramer who really exposed Michael Bellesiles as the lying sack-o-shit that he was. He would have gotten away with it all, too, if it hadn't been for those meddling history bloggers!

I looked back on Amazon today after I recalled this whole thing. The damn original Amazon editorial review is still up! Is it that the company, having been way more than a bookstore since pretty much the time of this controversy, didn't put in the money to have real reviewers anymore or anyone to go through with corrections? Maybe that's the case, but it could also be that this monster of Big-Biz, though not directly part of the F.A.G.S. "space", is on the usual ctrl-left side in this system of Crony-Capitalism we have now. Here's what amazon still has up on that page linked-to up top:

While gun supporters use the nation's gun-toting history in defense of their way of life, and revolutionary enthusiasts replay skirmishes on historic battlefields, it now turns out that America has not always had a gun culture, and wide-scale gun ownership is much newer than we think. After a 10-year search for "a world that isn't there," professor and scholar Michael Bellesiles discovered that Americans not only rarely owned guns prior to the Civil War, they wouldn't even take them for free from a government that wanted to arm its reluctant public. No sharpshooters, no gun in every home, no children learning to hunt beside their fathers. Bellesiles--whose research methods have generated a great deal of controversy and even a subsequent investigation by Emory University--searched legal, probate, military, and business records; fiction and personal letters; hunting magazines; and legislation in his quest for the legendary gun-wielding frontiersman, only to discover that he is a myth. There are other revelations: gun ownership and storage was strictly legislated in colonial days, and frivolous shooting of a musket was backed by the death penalty; men rarely died in duels because the guns were far too inaccurate (duels were about honor, not murder); pioneers didn't hunt (they trapped and farmed); frontier folk loved books, not guns; and the militia never won a war (it was too inept). In fact, prior to the Civil War, when mass production of higher quality guns became a reality, the republic's greatest problem was a dearth of guns, and a public that was too peaceable to care about civil defense. As Bellesiles writes, "Probably the major reason why the American Revolution lasted eight years, longer than any war in American history before Vietnam, was that when that brave patriot reached above the mantel, he pulled down a rusty, decaying, unusable musket (not a rifle), or found no gun there at all." Strangely, the eagle-eye frontiersman was created by East Coast fiction writers, while the idea of a gun as a household necessity was an advertising ploy of gun maker Samuel Colt (both just prior to the Civil War). The former group fabricated a historic and heroic past while Colt preyed on overblown fears of Indians and blacks. 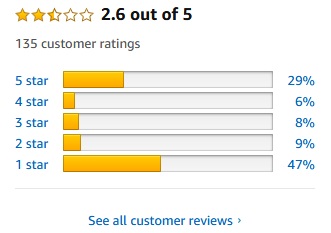 Now, somewhere deep into the 135 comments, pretty early on, lies my favorite. It's not a review of the book, though. It's more an evisceration of the amazon review:

OK, here's what the impartial amazon book reviewer had to say. I quote:
"it now turns out that America has not always had a gun culture, and wide-scale gun ownership is much newer than we think."
Oops, after being checked by real history professors, it turns out that, yes, dangit, we did have a gun culture and wide-scale gun ownership is old just like we thought.
"No sharpshooters, no gun in every home, no children learning to hunt beside their fathers"
Oops, yeah there were sharpshooters, most homes had at least one long gun, and who in heck else did children learn to hunt from, the family cat (ha, ha!)
"Bellesiles--whose research methods have generated a great deal of controversy and even a subsequent investigation by Emory University- ..." (Oh, and subsequent firing and revocation of his 4-grand in cash.) "..."
"Strangely, the eagle-eye frontiersman was created by East Coast fiction writers,..."
Oops, predictably, the four-eyed anti-gun frontiersman was created by an East Coast fiction writer (name starts with B, rhymes with a female body part.)
"He [Bellesiles]is more interested in discovering the truth than in taking sides. "
Oops, no, uh, sorry, here's where I beg to differ with you, Mr. Reviewer.
"His work .... will be hard to refute". No problem - all in a day's work, my friend.

The early '00s were still a time before which the universities world had not been completely infiltrated by the ctrl-left. Though there were plenty of lefties, especially in the humanities, such as history, there was obviously still some integrity left. Michael Bellesiles was stripped of the coveted Columbia University Bancroft prize that he had been awarded for this very book. That had never happened before and hasn't since. He had to give back the 4 grand, which is more like 7 grand in today's money. He "resigned" from Emory University, and was later found teaching at Central Connecticut State University in New Britain. That university's History Department web site no longer lists him as a faculty member there. He may have retired, or else the other 18 professors don't want people to know he works there.

What would happen nowadays if the same bit of complete ctrl-left lying in a purported scholarly work were found out? My guess there would be nobody left on the right to investigate, but were there one, he would be called names and punished. What a great memory this deal was, though!

Moderator
PS: Thanks, BernCar. After I looked this up on a couple of sites (NY Times wanted me to register, and that wasn't about to happen), I remembered that Steve Sailer had written, if not about these hoaxes, some others like them.

I'll look at this stuff on Wiki, per your suggestion, later on.Yes, I wish we had cornered the market on stupidity when we had the chance, like the Hunt brothers tried with silver.
BernCar
PS: You will find several listed under the topic, "List of Scholarly Publishing Stings," in Wikipedia. The one I referred to is known as the "Grievance Studies Affair" in 2017-2018, and is sourced by reference 26 in the Wikipedia article copied below (without the active link of the original footnote).

Yeah, a lot of people are trying to muscle in on Peak Stupidity's territory.
Moderator
PS: Haha on the last part! That's clever in a couple of ways, as it might also get reads from the lefties wanting to read reviews that match their worldview. I didn't see this one, but I did catch that very last one line review. Maybe it's from Mr. Bellesiles under a new amazon account.

If you have a link to that deal from 3 years, back, please paste it in, BC. It may come back to me once I read about it.
You are right - things have become so controlled by the left that the ones who bring up the academic fraud are the ones to get punished.

Anyway, a commenter named J1234 brought this up, and he also replied with so more information. Like I wrote "blast from the past". It's been 2 decades, wow!
BernCar
PS: I had forgotten about this episode--thanks for reminding us of what may have been one of the last examples of academic fraud being exposed without repercussions for the ones exposing the fraud. Recall a few years back the three authors who submitted obviously nonsense-laden articles to academic journals oriented to grievance studies and intersectional voodoo disciplines. The nonsense was published time after time. When this lack of standards in these "peer reviewed" scholarly journals was exposed, the authors who brought this to the attention of academia were chastised, disciplined or otherwise punished for exposing the grift.

I went to Amazon to look at the reviews to see if Bellesiles was being named for the fraud he was, and, yes, there is quite a lot of that; but the first "top review" listed (from last year!) praised the book. My favorite review gave the book five stars and said it was a "superb example of academic fraud."