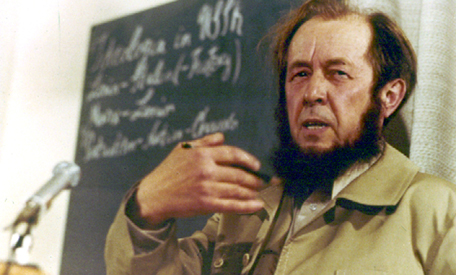 Alexander Solzhenitsyn is known to be one of the great Russian writers, and there have been many. This blogger has not had the time to read any of them, I gotta admit. Ayn Rand kinda turned me off to the large tomes, but I probably should give Mr. Solzhenitsyn's most famous book a try.

The book in question is The Gulag Archipelago 1918-1956, by the man shown above. The late Mr. Solzhenitsyn (died in '08) wrote of the despair and hopelessness of Stalin's Soviet Union with it's secret police, prison and work camps where many a Russian froze or worked himself to death. He wrote this book based on his own experience of 11 years spent in a Gulag, along with testimony of 200 or so survivors.

It's really something that should not be made light of, were one to know something about the innards of that Communist bastion, the Soviet Union, with it's 7 decades of Communism that ruined the lives of 4 generations of Russian people. I gotta say, the 2 guys spouting off in embedded youtube videos in yesterday's post were not making light of it. I'll give them that. They are envious that Gulags have not been implemented in America yet, and seem to be not happy with the number of Russians starved, worked to death, or just plain-old shot and pushed into a ditch.

Before I get too many words in about what should be done to the guys like those in yesterday's video, as in ANY words, let me quote this great man a bit:

About the people who implemented the system that produced the Gulags (note carefully, that Russia's Constitution has never had any kind of Amendment II language contained in it . You would never have seen a gun rally like that in Richmond, Virginia last week.)

You must understand, the leading Bolsheviks who took over Russia were not Russians. They hated Russians. They hated Christians. Driven by ethnic hatred they tortured and slaughtered millions of Russians without a shred of human remorse. It cannot be overstated. Bolshevism committed the greatest human slaughter of all time. The fact that most of the world is ignorant and uncaring about this enormous crime is proof that the global media is in the hands of the perpetrators.

That may have been written a good while back, but it's quite apt today too, with a ctrl-R of American for Russia.

If only it were all so simple! If only there were evil people somewhere insidiously committing evil deeds, and it were necessary only to separate them from the rest of us and destroy them. But the line dividing good and evil cuts through the heart of every human being. And who is willing to destroy a piece of his own heart?

Hmmmm ... I think here it cuts through census tracts, but it's becoming pretty clear which human beings are on which side. Next, on Socialism, this may sound somewhat familiar to the regular Peak Stupidity reader:

Modern society is hypnotized by socialism. It is prevented by socialism from seeing the mortal danger it is in. And one of the greatest dangers of all is that you have lost all sense of danger, you cannot even see where it's coming from as it moves swiftly towards you.

The simple step of a courageous individual is not to take part in the lie. "One word of truth outweighs the world.

You can resolve to live your life with integrity. Let your credo be this: Let the lie come into the world, let it even triumph. But not through me.

If I were asked today to formulate as concisely as possible what was the main cause of the ruinous revolution that swallowed up some 60 million of our people, I could not put it more accurately than to repeat: 'Men had forgotten God; that is why all this has happened.'

Hey, that's great stuff and all, but let me keep my promise to give Alexander Solzhenitsyn's reply to those young Commie fucks working for Bernie Sanders. Mr. Solzhenitsyn was THERE, guys. His abject misery caused him to think about how the evil could have been prevented:

And how we burned in the camps later, thinking: What would things have been like if every security operative, when he went out at night to make an arrest, had been uncertain whether he would return alive and had to say good-bye to his family? Or if, during periods of mass arrests, as for example in Leningrad, when they arrested a quarter of the entire city, people had not simply sat there in their lairs, paling with terror at every bang of the downstairs door and at every step on the staircase, but had understood they had nothing left to lose and had boldly set up in the downstairs hall an ambush of half a dozen people with axes, hammers, pokers, or whatever else was at hand? After all, you knew ahead of time that those bluecaps were out at night for no good purpose. And you could be sure ahead of time that you’d be cracking the skull of a cutthroat.

Preach it, brother, errr, Comrade! I wish I could have met this great man during the time he was alive and speaking in America about the causes of evil.

Moderator
PS: OK, Mr. Blanc, I went virtually straight to the library per your instructions. "Ivan Denisovich" is on the way! Thank you. I didn't know Mr. Solzhenitsyn was such a prolific writer. After this one, I'll get TGA.

Just speaking of Russian material in general, after watching "Dr. Zhivago", I had a number of things I wondered about that were probably in the book.
MBlanc46
PS His novels based on his time in the Gulag are excellent. One Day in the Life of Ivan Denisovich is a must. It is short, a hundred pages or so. Go the the library, go directly to the library, do not pass go, do not collect $200, and get a copy. It is riveting. The longer zek novels—First Circle and Cancer Ward (Solzhenitsyn was treated for cancer while in prison)—are also well worth a read. They were published in the Soviet Union with some expurgations. Not too long ago, an unexpurgated version of First Circle was published. I have a copy but have not yet read it. I looked forward to his series on the Great War and the Russian Revolution, but was disappointed with August 1914. He’s first rate when writing from his own experience, but mediocre when trying to do an historical novel. He’s not Tolstoy. I didn’t read the Gulag Archipelago because I’d already read quite a bit of straight history of the Stalin period.
Bill H
PS "First they came for..."
Moderator
PS: Thanks for the reader recommendation, Mr. Ong. I can put that on hold at the 'brary. I'm gonna finish another short book first though.
Richard Ong
PS Do not fail to read TGA. Best book I ever read. Absolutely fascinating.