Big Sister is watching you! 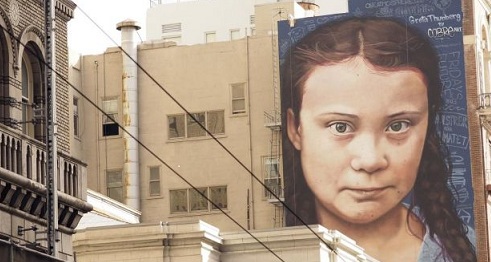 I wonder who paid for that mural? Is it San Francisco or California taxpayers? I wish we'd known they were doing so well with their budget out there - Uncle Sam could use a California budget guru at $1,000/hr - it's a steal!

Well, I just read this one from the Washington Examiner site, that says San Francisco is getting this strangely familiar type mural for free.

The mural is located in the downtown part of the city near Union Square and is being painted by artist Andrés Petreselli.

This guy really captures the essence of his subject, though a flashing neon "HOW DARE YOU?!" sign would add to the effect in my opinion (no charge for the idea, San Fran). It would especially help discourage those CITIZENS who live on sidewalks within eyeshot of the mural from spoiling the beauty of the city by the bay, oh, whoa, whoa, oh, oh ... 🎵

Imagine leaving the public library and heading to one's grate, but first, , dropping one's drawers to relieve the bowels (it's always good to be regular) and seeing Big Sister Greta up on the side of that building, always watching, watching ... "number 2? HOW! DARE! YOU!" ( 🎵If you're going to San Francisco, be sure to bring a change of underwear ... 🎵)

Now, I'd have thought Nancy Pelosi, in a red or pink dress, with one finger pointed at the public would have been a more appropriate Big Sister for San Francisco. You'd think she would appeal to regional tastes in Big Sisters. Too old, maybe?

We didn't all know how this would start, but the Global Climate Stupidity has been a good springboard for Orwellian control globally. Because she's jumped on that bandwagon early in life, I guess Greta now, is BIG BIG BIG in Orwellian Sisterhood. She's got a perfect face for the posters and has 50 good years to hone her Orwellianness, and she's off to a very good start. Greta Thunberg's amazing rise from a slightly-off, pre-pubescent little Swedish girl to the Poster Mural Child for Globalist Control of Everything makes me wonder if she is even the AntiChrist we've been looking for.

Peak Stupidity has left the AntiChrist question simmer on the back burner for quite some time, leaving the options of Øb☭ma, the HIldabeast, or the Soros as our favorites. Is young Greta a possibility for the position? Peak Stupidity may consult with our HR staff later in the business day, but age is a big question. Is there an age cut-off for being accepted to AntiChristianity? Greta will be 18 next year, and that used to be OK for beer and wine, so you'd think ... I don't know. If not the AntiChrist, I would say Greta Thunberg is at least the Anti-Pippi-Longstocking.

Next time I'm in the city that only rube tourists call "Frisco", just " a-settin' on the dock of the bay, watching the tide roll away 🎵..." I may run into one or more wharf rats sent by Big Sister to help me get my mind right. When the lights go down in the city, I will understand that, yes, two professional sailing crews of 4, traveling in first class on 777 airliners on the polar tracks do NOT add up to more combustion and release of the natural atmospheric trace gases CO2 and H2O than does a single ticket for a single Swedish retard. I see the math now, and I LUV Big Sister.

No, no, that's what I've been trying to tell you people! These people were NOT (necessarily) gay. It was the 1970s, and if you wanted people to attend your concerts, dressing this way was just what you did. It's from Journey's 1978 album Infinity. Yes, I did have The Dead's Wharf Rat in mind, but I'll have to include that in a later post. Anyone have a favorite version ... anyone, ... Ganderson?

Moderator
PS: Yeah, Mr. Blanc., and it's a shame that parents would raise their own girl to be this poster-child straight out of Orwell. I wonder how she'll feel about it later on.
MBlanc46
PS An absolutely perfect image to represent the new world order.