Just a site note: I'm gonna add a few more Topic Keys, as I keep running into a lack of the really appropriate category for some posts. In this case "Customer Care", the new term for service. A lot of the posts with the Curmudgeonry key should have this new Customer Care key too. Some time soon, I will add a few more Topic Keys, than go through all the posts and divvy out more of the keys to the posts. I think that'll take a while ...

Here's the story now. There's nobody at the counter half the time now. I'm talking hotel lobbies and convenience stores - that's what I've noticed in particular. You come down to the lobby for something, maybe checking out, and you don't see anyone. I get that people cost money, and companies are running as lean as they can. You've got to have someone out front though. They seem to all be stuck somewhere far away, working or not working, I don't know, to where you can't even see them from any angle. 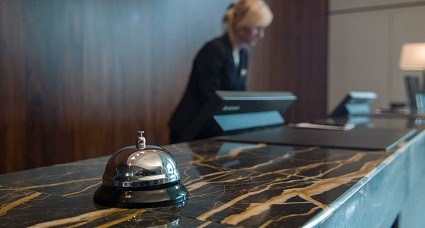 In the old days, there at least was that little mechanical bell sitting there. You wouldn't feel rude to ring that thing. There are no bells there now. You've got to say something, and NOBODY gets the whole clearing-the-throat thing anymore ("You OK?"). As a service to any readers who are both computer-savvy AND give a damn, I give this suggestion: How about a program , errr an app for this? The sound systems on the new smart-phones are impressive, and this would be a piece of cake. Get that old bell-tone recorded and presto, the user can play it on a 10 second loop until someone comes out.

Yes, I know there are cameras, so that these hidden employees can glance at monitors looking for customers to serve. Maybe corporate reckons they will pay attention and come right out when needed. Nah. I also get that retail can be boring and doesn't pay well. I would guess that most of these hidden employees are spending time on their own smart phones doing who knows what, until they realize someone is out front, somehow. Is it too much to ask that they do their internet transactions on a computer screen right behind the counter at front. It works great, as the customer will often be fooled into thinking this agent is busy doing some kind of work (sometimes the case, even):

At the gas stations, the small operations have the single employee in the place running around, in the back grabbing boxes, stocking candy bars, back to the counter, out in the store to sweep... it's ridiculous. I'm sure Corporate believes that all the cameras will keep the "shrinkage" down, even with the one guy all over the store. Again, I doubt it works as planned. You think when some petty thief wearing a hoody stuffs things a few things into his coat and walks out, this single guy will know about it, much less give a damn? If he does, really, will the 5-0 be called in to review the video from all angles and go find the guy?

Because the cash price for gas is rightfully cheaper often, I go inside once, and often twice, to pay or get change back for a fill-up. I first have to find the one guy.

This post is not a rant about the individuals, you can see, but the Big Corporate stupidity that thinks it's a good arrangement, having nobody around for service. Retail doesn't pay very well, and standing around is boring, and why not feed that screen addition when there's nothing to do? I am not good at this "sector", I want no part of it, and have a fun post coming up to illustrate just that. This is about the Corporate know-it-alls wanting to save on the employee costs, but I really wonder if they lose it all on theft and loss of goodwill.

Moderator
PS: Yes, Bill, a good manager makes all the difference. At one of the big hub airports I've been to, most of the restaurants are run with floating pools of employees that can be placed at one or the other with no cohesive work-force. Service sucks at all of those while the few that are owned differently with their own dedicated employees (well not necessarily "dedicated" in that sense) run at twice the speed - it's an airport - almost everybody getting food is in a hurry.

I worked a at a restaurant for a short while that was owned and managed by 2 brothers. They worked their asses off. I would say that 1/2 the work was cleaning. Cleaning, cleaning, cleaning ... it doesn't end.
Bill H
PS There's a Burger King I like to go to, and I know the guy who owns it. He works his ass of there, filling orders at the drive thru, restocking the drinks machine, clearing tables and, of course, supervising the employees. He's a very pleasant person, speaks nicely to the employees, and they seem to like him.

When he is there everyone is hustling and the service is pleasant, fast and accurate. When he's not there the mood is sullen, the service is slow as hell, and they ALWAYS get my order wrong.

But, this being California, they get paid $15/hr whether he's there or not. They want their "living wage," but they don't want to do the job the way is't supposed to be done.
Moderator
PS: Yeah, absolutely right, BC, people got wise to the irony in the term "customer service". Yes, the government bureaucrats ought to be honest and dub us "Tax Cattle". I'd be humorous for all involved.

As soon as euphemisms get figured out by the majority, they must be changed again - I have an old post on that:

Bernie doesn't know that 15 bucks doesn't by a steel-bodied Radio Flyer red wagon anymore, that' why he picked that number.
BernCar
PS: They changed the name to "customer care" because "customer service" became inpossible to say without a sarcastic emphasis on the word "service". They'll have to change the "customer" part soon because bureaucracies like the DMV and Property Tax offices have begun to refer to the tax cattle as "customers". Like you, I sympathize with the retail employees, but don't fret. I'm told that Bernie Sanders will raise the minimum wage to $15/hour, although why he wants to stop at that piddling amount, I couldn't guess.