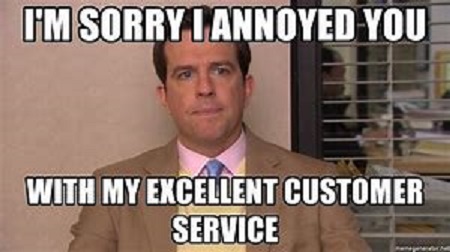 It's been a week since Peak Stupidity's last "Customer Care" curmudgeonry, but this time it's just a humorous story. The star of this story, your blogger here, worked for half a year or so many moons ago delivering pizza pies. Yeah, we called them pizza pies back then, just like in Italy or at least movies like Moonstruck. (Man, that movie, The Godfather I, and the Sopranos DVDs always make me hungry. Those people know how to cook!)

Seeing as this was a while back, the large pizza pie I was delivering to a woman's dorm one night was $5.77. This was not just for double-cheese and a few measly pepperonis, mind you. It was something like a 4-item pie, one that would cost around $20 today - there's that inflation again - and no this was not in the 1960s! This was some good NY-style shit, and I LUVED, LUVED, LUVED that occasional bad order that we all got to eat, unless somebody had butchered it with vegetable toppings!

Now, I earned a minimum wage salary, 6% of the orders that I delivered, and the tips that were pretty much nonexistent from the students. The latter was pretty understandable as they were mostly low-budget, 2-to-a-room kids that were not living high on the taxpayers' generous loans. "It was a different time, you understand."

This pizza place was a small outfit with good people (I'll get back to that at the end), so I had no sign on my car or anything else that still wouldn't have helped with parking anyway, come to think of it. This area was packed on weekend nights, and one could not do the job if he tried to find a real parking space. Those meter maids worked up an appetite of their own through the wee hours of the morning, so you just had to park somewhere off the street, put your hazard lights on, and keep it quick.

I had a great deal going, having delivered 3 pies already to nearby dorms from the same parking spot, and I decided to go for the last one. It was taking a big chance, as a parking ticket would wipe out 1/4 of the whole 10-hour nights earnings. So I ran like hell across the big yard, somewhat in the dark, up the steps, and into the nicely-furnished lobby, where the boyfriend and the girl were waiting. (You couldn't go up to the rooms in the girls' dorms.) The guy gave me 6 bucks. I didn't expect any tip, but as I went through my pockets I had no change. Where the change went, I sure don't recollect, but I probably put it into the car ashtray before this last delivery.

"Hey, can you spot me the 23 cents*, I'm parked in a bad spot and I gotta run." "NOPE." Don't get me wrong, I believe in verbal contracts, and a deal ($5.77) is a deal. However, he was gonna ruin my night with this crap. The threat of a parking ticket that would ruin my night put me in a fight-or-flight situation. I ran the 200 yards back to the car, grabbed a Fistful of Pennies out of the ashtray, and ran back, counting out 23 of them from one hand to the other as I ran. I flew up the steps and into the lobby.

I was back at the store 3 minutes later, and the boss had already received some kind of phone call. He was looking at me with a big grin as I stepped through the doorway - "The customer is always right, you know." It's great to have a good boss that knows who's conscientious, but no, I was never cut out for Customer Care.

* Even today, that'd be, just based on pizza inflation, 75 cents, and would you not give a young guy a break?

Moderator
PS: Thanks for the replies, both of y'all. I do remember getting tipped with a Miller beer a couple of times, Mr. Blanc, which I promptly drank before I got back on the road, for safety reasons.

It sounds like that boss had no one to be mad at buy himself, Bill. Why'd he take it out on the other guy, or was it just a good practical joke?
MBlanc46
PS If you can’t afford to tip the delivery person, even if you’re a poor student, pick up your own damned pizza.
Bill H
PS When I worked in the steel industry I had a boss who lost a $50 football bet. Not only did he pay it in pennies, he put the pennies into a custom made steel box and welded it shut.