(Continued from Amendment XI. My Doc advised Peak Stupidity to continue this Morning Constitutional on a regular basic to prevent irregularity. There are 3 pieces of extremely high stupidity that crossed the piece of plywood on top of the milk crates in Mama's basement city desk just this very morning, so stay tuned...) 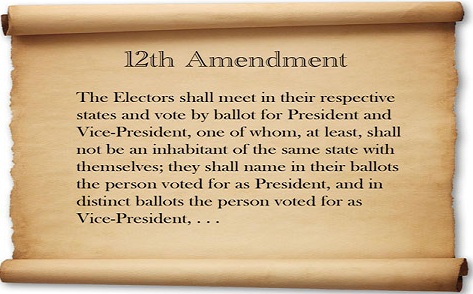 The 12th Amendment of the US Constitution was ratified 15 years after the original document was implemented*, on June 15th of 1804. The footnote below explains the dates I'm using (now corrected in the post on Amendment 11) but discussed in detail in this page on the "Constitution Center" site.

I described that site already in that previous post. I'll probably use it for material for all the posts to come too. As I wrote, the damn thing has the usual political correctness on the front pages. Who'd expect that on a US Constitution site? [It IS the current year! - Ed] So, for anyone interested, I'll just consider only the actual US Constitution text and discussion material from their "Interactive Constitution" link as their Home Page (Remember home pages? That brings back memories.)

Amendment XII for the graphically-challenged and those who want to read the whole long thing it's titled "Election of President and Vice President":

It's quite wordy, but it's more just election housekeeping (no pun intended). The impetus behind Amendment XII was the long and complicated resolution of the Presidential election of 1800 between incumbent Federalist John Adams and Democratic-Republican candidate Thomas Jefferson, also described nicely by the same writer, one Mr. Sanford Levinson:

They ran against each other again in 1800, and both Adams and Jefferson had “running mates,” Charles Cotesworth Pinckney from South Carolina in the case of Adams (and the Federalist Party) and Aaron Burr of New York, for Jefferson. The Federalist Party electors figured out that it was important not to cast both of their votes for Adams and Pinckney, for that would create a tie and, if both got a majority of the vote, throw the election into the House; the Democratic-Republican electors were not so sagacious. They dutifully cast both of their votes for their party’s champions, creating a tie majority vote that forced the House to choose between Jefferson and Burr.

The tie vote exposed deep problems in the 1787 system. The one-state/one-vote rule had the practical effect of giving Delaware’s sole Representative Bayard, an ardent Federalist, the same voting power as Virginia, then the largest state (and home, of course, of Jefferson). And what if a state had an even number of representatives who split evening on their choice? In that case, the state’s vote was not cast at all. Given that there were 16 states in the Union in 1801, nine delegations had to agree on their choice. Only on the 36th ballot did Bayard agree to vote for Jefferson and to break the deadlock (by which time at least two Jeffersonian governors, from Pennsylvania and Virginia, were threatening to call out their state militias and order them to march on the new national capitol in Washington, D.C.**). Jefferson was peacefully inaugurated on March 4, and the all-important precedent was set for peaceful transfer of power. Yet the original electoral college system was exposed as problematic, and there was widespread agreement that something had to be done. But what?

At the time, there was some talk about switching to a popular vote. (We now seem to hear that often, from the modern Democrats - only when they lose, though ...) The electoral college system was designed for elections of actual public servants, guys who would drop their real work to help out this new experiment in government, not professional politicians. The idea was that there would be no political parties, but that was already a dead letter within a decade of the founding of the former-Republic.

However, rather than drop the Electoral College completely, the writers of the 12th Amendment modified the procedures that had been enunciated in Article II, Section I - "The Executive Branch", of the original document. Now, just 15 years in, it was acknowledged that political parties had emerged, and would emerge, so a deadlock between the candidate for President and his own party's VP "running-mate"*** should be prevented. The electors would have 2 votes, but now, one explicitly for the President and one for the VP.

Does this all matter now? No, I don't think so, because the the electors themselves, of the electoral college system, seem to not have the power there were meant to. No, I don't mean the very important idea of the election being decided by the States, via their popular vote, vs. a national popular vote. I just mean that the electors don't normally go against the votes of their States. The left would like to change that, but I foresee the kind of trouble that DOES involve militias were that to be implemented!

The Founders intended us to have a Republic, if you recall, not a Democracy. These electors were actually given a lot of power (by their States) to make this important decision in the Presidential vote, even with the ability to overrule their voters. I don't see the Founders of our country as gods, mind you, but they put a lot of damn thought into this thing. Even as a big Constitutionalist, though, I still don't think it would be good for an elector to go against the wishes of his own state.

Amendment XII cleaned up a few details that could have caused more trouble in Presidential elections, that's all, just some administrative housekeeping. It was no Amendment II or X, I can tell you that.

*** "Running mate" wouldn't have meant anything before political parties. The VP was just the guy who got the 2nd most number of electoral votes.

Moderator
PS: Thanks, Mr. Blanc. I didn't know if any readers would appreciate this stuff, but I'm in for a pound at this point.
MBlanc46
PS Very informative series. Thanks.