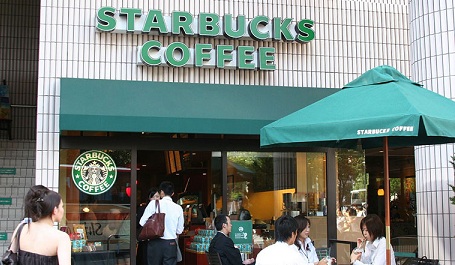 This post is based on actual events. [Aren't they all?! - Ed] Peak Stupidity has spent time at the Starbucks coffee shop* more than occasionally lately, so I suppose we have not practiced what we preached regarding other source of caffeine (also, because I don't drink coffee to begin with, just hot chocolate).

We've railed on Starbucks before for their Corporate Diversity-appeasement (in Nationwide 10,000-Store Barista-Based Synchronized Struggle Session a Success!) and treehugger-style stupidity (in Grasping at Straws) in the past. This post is closely related to the former of these realms of stupidity.

As I sat outside the place waiting for some friends, I saw a bum-type guy that I'd seen plenty of times in the area sitting at the next table. As I asked him to lend me a chair, I could tell he was not one of the more normally seen, mentally-ill homeless (he was maybe homeless, but not mentally ill), This was due to his very cogent manner of replying to me. He was looking for A/C power for his big laptop, and when I mentioned that he'd probably have to get it inside, he noted that their were outlets that I hadn't seen behind him (which didn't end up to have any power though).

Somehow the guy knew not to bum money from me**. Later, after my friends had come, this guy did start talking, in a very friendly manner, mind you, almost as a salesman would, to a young Millennial lady on the way in to get her dose of caffeine (likely, she checked in on the app - so cool.) He got a dollar out of her, something a more lower-EQ bum would probably not have gotten. About a minute later, one of the barista girls, also a Millennial, like almost all of them, came out to admonish the guy.

The thing is, on the face of it, this particular guy was not really the kind of bum that worries the customers. One could blow off his saleman-like banter, and he was nice about it. Additionally, he didn't look dirty or smell really bad. Were it up to me, he'd not be the guy that I'd kick off Starbucks property. The young lady who gave him a buck may have complained inside, but I kinda doubt it. That'd be kind of low-down in fact.

However, Starbucks has put themselves between a rock and a hard place through their own stupidity. During the brewhaha a couple of years back involving certain privileged people wanting to abuse the Big-Biz chain's common areas (especially the bathrooms), instead of explaining property rights and standing firm, corporate Starbucks chose Diversity-Appeasement. The employees were subjected to the struggle sessions linked-to above, and the whole situation with bums became tricky going forward ("going forward" is Big-Biz speak for "after that").

The onus has been on the store managers and employees to handle things very delicately. You can't piss off the bum, but you don't want customers scared of them, something Millennials, most of the customers, are very prone to being. I told these Millennials almost 2 years ago, regarding Corporate Starbucks' treating them to PC sessions, that, contrary to the lyrics of John Cougar (from his Melon Camp), Authority does NOT ALWAYS WIN! See Starbucks - fake coupons and raising hell.

Back to the anecdote again, finally, the young lady barista, possibly the manager on duty, come to think of it, had to talk very carefully to the guy. It sounded sweet, but she also sounded scared. No, there was no reason to be scared of this particular guy - she was scared of saying the wrong thing. Her fear of saying the wrong thing was palpable in both her voice and look on her face. I haven't mentioned yet that the bum was a black guy. This just made it worse. She can't be a racist, but Corporate policy is to get this guy to leave, very nicely, as not to cause a protest later. What a position to be in! I don't envy these people.

It's not like I or my friends could help much either, or even wanted to, in this case. The guy wasn't really causing any trouble, as the trouble was more in the mind of the Millennial who'd given him a buck. Additionally, it's not like this Millennial would appreciate us older guys saying anything to the man. It'd just set her off in some manner, thinking we were now the racists. I didn't bring this Starbucks PC shit on, and I'm not gonna help them with their problems, unless it's close to violence.

Now, that I mentioned the race of the bum, I can tell you that I am very certain that the customer would not have given a white guy a buck. She either felt her brainwashed-in guilt about her "white privilege" or thought it would look bad if she didn't give the nice black guy some money. So, she was really part of the problem too, as her giving the guy money caused him to be specifically ejectable from the premises. Her biggest goal in all of this was, yeah, you got it, not to offend anyone.

Well, this bum mentioned, as he was being ever-so-carefullyy-ejected that he was trying to raise another buck or two to get a fancy coffee. (That would have been a way to stay inside for a few hours, as it was a bit chilly, and even get some power for his big lap-top.) He got up to go without much protest, As he got up, though, he must have whispered something really rude or crude into the barista/manager's ear, as her look changed from relieved to horrified, and she made some remark hurrying back inside. Even that was low-keyed, as to not be a racist or something. I was very surprised at this last part. You try to give a guy some credit, and then he goes and says something nasty, and sure to be a fireable offense had he had a job, to the Millennial trying her best not to offend anybody in the whole world.

Like I said, I don't envy the Millennials for this stuff. Will their offspring 4 decades into the future berate them as they try to avoid the gulags and the daily struggle sessions with "Really, Millennial?"

Now, way off in a distant world from the sad America of the Millennial there was a song by a band called Starbuck. It has nothing else to do with this post. This is a real blast from a distant past, and you don't get much xylophone music around these parts:

Moonlight Feels Right is from Starbuck's 1976 album of the same name.


* For more thoughts on the ubiquity of the coffee shops in general, see Thoughts from the coffee shop ... and Starbucks vs. the Viennese Kaffeehaus.

** In general, I only give money to some soft-spoken people on the street who I best can tell will not blow it on $4 lattes, liquor, or lottery tickets.

Mr. Rational
PS: I remember that song. It reminds me just how insipid pop music was in the 1970's, giving people no respite from the wasteland of disco. Remember "Afternoon Delight"?

https://www.youtube.com/watch?v=wu1UXCdyNo0
Moderator
PS: Dtbb, I kind of like the taste, especially in coffee-flavored ice cream (THE BEST!), but I don't want it to be a necessary drug for me.

I'm glad you liked the Starbuck hit.
Dtbb
PS:Autocorrect did the "it's". I always forget to proofread. I certainly didn't type it that way.
Dtbb
PS:Thanks for that song. Hadn't thought about, let alone heard, that song for years and years. Never been in a Starbucks or any of it's clones. The smell of coffee turns my stomach.