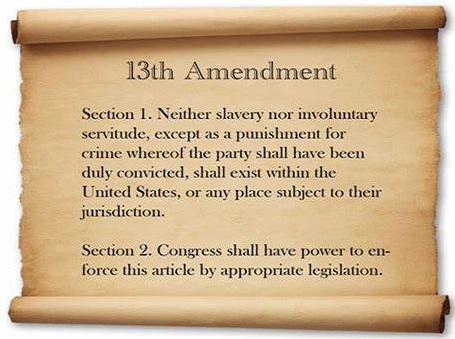 There was a long period in American history, 61 years, between the ratification of the previous Amendment, # 12 (presidential-election-housekeeping) and this important Amendment #13. Slavery was proclaimed (that's what a proclamation is, after all) illegal in the Southern States by President Lincoln's Emancipation Proclamation at the beginning of 1863, in the middle of the War Between the States. It was still legal up North and West until Amendment XIII was ratified in December of 1865.

The various Southern States ratified this Amendment, but, considering the bad blood by this point, it was only likely due to the fact that the States of the former Confederacy had their governments occupied by the North, a policy called "Reconstruction". That went on for a decade at least.

Anyway, I don't think you'd find 1 in 1000 Americans, or 1 in 9 SCROTUS members, who would argue against this one:

Neither slavery nor involuntary servitude, except as a punishment for crime whereof the party shall have been duly convicted, shall exist within the United States, or any place subject to their jurisdiction.

Congress shall have power to enforce this article by appropriate legislation.

It sure is succinct. Except as part of a criminal sentence, no one should be forced to work against his will. Possibly, Section 2 is already an overreach of Federal Government power, as the States could handle this too. You know this simple one-line allocation of power WILL be used against you at some point.

I really like this Constitution Center website, but sure enough, the very first line of the interpretation/history page is already bat-shit lefty: "Slavery is America's original sin." That's by one Professor Jamal Greene (of course). Has this guy never read the Bible, or perhaps some history? Slavery is mentioned in the Bible hundreds or more times. It is written about pretty much as a fact of life. Professor Greene may know that and and simply be stating that the Founder's America was sin-free other than the slavery. I am a BIG Constitutionalist, but, these guys were not gods.

In fact, though the War Between the States was part of a big economic clash between the North and South, and was a war of rebellion. Yes, slavery was a big part of the rift. There aren't any countries in the world that had a war with casualties amounting to over 2% of the population, meaning ~ 5% of the young men for the sake of this issue in history. One can put lots of blame on the slave traders, anyway. They an order-of-magnitude more Africans to other places in the Western Hemisphere, not to mention the ones taken by the Moslems of north Africa, which went on for a Millennia and probably still does!

Importing cheap labor to bring labor costs down was a big mistake, for everyone involved. It's too bad that's been happening again for a half-century.

The blurb in question was co-written by a woman who insists on writing "her" for the possessive pronoun of unknown gender:

For example, the Anti-Peonage Act of 1867 prohibits peonage, and another federal law, 18 U.S.C. § 1592, makes it a crime to take somebody’s passport or other official documents for the purpose of holding her as a slave.

I can put up with a little bit of PC, only because there'll be different authors for subsequent Amendments. OK, there may be a good reason to assume a female gender here - I'll get to that in a second.

Amendment XIII should be one of the simplest Amendments for anyone to understand and agree with. As the discussion on that Constitution Center page ends though, we find out that Section 2 is being used for all sorts of mischief:

Section Two of the Thirteenth Amendment has broader applicability as well. The Supreme Court has long held that this provision also allows Congress to pass laws to eradicate the “badges and incidents of slavery.” The Supreme Court has never defined the full scope of what the badges and incidents of slavery are, and instead has left it to Congress to flesh out a definition. In The Civil Rights Cases (1883), the Court held that racial discrimination in private inns, theaters, and public transportation did not qualify as a badge or incident of slavery. In a series of cases in the 1960s and 1970s, however, the Court held that racial discrimination by private housing developers and private schools is among the badges and incidents of slavery that Congress may outlaw under Section Two of the Thirteenth Amendment. Most recently, Congress has determined that Section Two provides a basis for a portion of the Matthew Shepard and James Byrd, Jr. Hate Crimes Prevention Act of 2009 (which criminalizes race-based hate crimes) and the Trafficking Victims Protection Act (which penalizes human trafficking and protects its survivors). The Supreme Court has yet to evaluate these laws.

"Badges and incidences", huh? They're just making stuff up now. All of the "hate crime" BS just violates the Constitution in other areas. The conclusion here:

Now that slavery is a part of our past, the Amendment’s current relevance is subject to debate. Does it govern the fairness of modern labor practices? Does it empower Congress to pass broad-ranging civil rights laws? Whatever the outcome of those debates, though, the Thirteenth Amendment deserves recognition as an historic and solemn promise that slavery will never again exist in the United States.

Uhh, actually ... ! That's not really the case. VDare has written plenty about many of the practices of involuntary servitude by illegal immigrants, or even immigrants made legal to do the job required by the immigrant Massas. Yeah, slavery exists here and there in modern America - you'll usually only hear about it if you speak their particular foreign language, or if Massa gets busted. It's that cheap labor thing again ...

Moderator
PS: Rex, I've heard that argument from the Libertarians. I guess, considering the draft of men by Lincoln for his war before Amendment 13, and that there was conscription during the Revolution, I guess there was plenty of precedent. That doesn't mean its Constitutional either though. We've pretty much gone off the plan of our Founders, as there was not to be a standing army either.
Moderator
PS: Mr. Blanc, there are still lots of good hardworking Americans left, but I often look around me at some other Americans or "Americans" and think "why would I want to fight for these people?"
Rex Little
PS You would think that this amendment would prohibit the military draft, but the Supreme Court has repeatedly ruled otherwise, in cases dating back over 100 years.
MBlanc46
PS “They’re just making stuff up now”. Yes, indeed. And we’ve let them get away with it time after time. Not that I know how to stop them. Except maybe the bit about the blood of patriots watering the tree of liberty from time to time. I’ve not been prepared to shed my blood, however.