This is just a snippet: 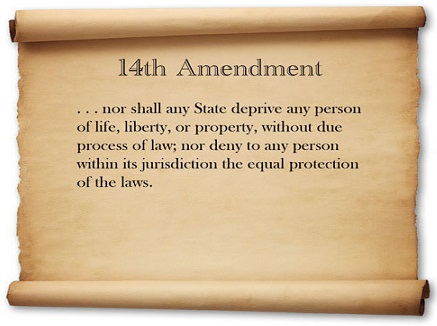 I'll say right from the get-go that this Amendment was for the most part, simple vindictiveness of the post-War Between the States northern States against the South, but, in general a big fat fuck-up of an Amendment.

The ratification process for Amendment 14 was completed with its signing by representatives from South Carolina near the end of 1868. "South Carolina?!", you ask. Good question there - no Southern State besides Tennessee ratified this Amendment on the 1st go-around. The "Reconstruction" process was ramped up to take control of all of the governments of the States that were recalcitrant in signing, along with for other reasons. Though the Southern State had been forced back into the Union by the 4 year-long, near 3/4 million casualty war, they would have no representation in Congress until signing of Amendment XIV. So, this Amendment was basically railroaded through by Washington during a military-backed occupation of the South.

Lets look at each section:

The point of this section was to specify that former slaves were now citizens of the US. I've got no problem with that. There are a number of other points in this section which are very important and have had big repercussions on American law.

One might think there should be no qualms by a Constitutionalist against the incorporation of all the ideas therein to State law. However, it still takes away from the power of the States. I guess that was the goal.

Next, all those with any knowledge of the existential immigration-invasion issue facing America should have heard Amendment XIV mentioned in relation to the "birthright citizenship" "clause". Yeah "clause" is quoted too, because there is really no clause per se. It was a big screw up, based on the writers trying to be very general in the language, normally a good thing.

The Amendment was written about the former slaves, not some day-old baby born in a San Francisco hospital by a Chinese lady with no business being in America in the first place. The writers could not have imagined how Section 1 of Amendment XIV could be abused. However, "subject to the jurisdiction of" means something. Is a day-old baby subject to the jurisdiction of ANYBODY? Was that 17 y/o whose parents were not citizens ever "naturalized"? What does "naturalized" mean? I will defer any more argument on this one to the great lawyer/pundit Ann Coulter, who wrote "The True History Of Millstone Babies". Please read that article, as I can't understand it completely enough to explain here at this point.

Representatives shall be apportioned among the several States according to their respective numbers, counting the whole number of persons in each State, excluding Indians not taxed. But when the right to vote at any election for the choice of electors for President and Vice-President of the United States, Representatives in Congress, the Executive and Judicial officers of a State, or the members of the Legislature thereof, is denied to any of the male inhabitants of such State, being twenty-one years of age, and citizens of the United States, or in any way abridged, except for participation in rebellion, or other crime, the basis of representation therein shall be reduced in the proportion which the number of such male citizens shall bear to the whole number of male citizens twenty-one years of age in such State.

This one is truly getting into the business of the States. There were plenty of other limitations on voting other than race back in the day. Ownership of property, age, and there's that sexist "male" thing (still in there after Amend 14, please note) and anything else the State wanted to specify were fair game. That's how the various States allocated their power to their own citizens. Many of us now understand the point in limiting the vote to those who will likely make the best decisions for the long time good. The way it's going now, with 1/2 the voters being net beneficiaries of US Government handouts, is not working at all.

Section 2 there put the kibosh on the State's ability to enable only select voters, and it was a huge power grab by the Feds. Nice going, Yankee cucks! Lastly, note that part about men that had participated in a rebellion. That was pure vindictiveness.

No person shall be a Senator or Representative in Congress, or elector of President and Vice-President, or hold any office, civil or military, under the United States, or under any State, who, having previously taken an oath, as a member of Congress, or as an officer of the United States, or as a member of any State legislature, or as an executive or judicial officer of any State, to support the Constitution of the United States, shall have engaged in insurrection or rebellion against the same, or given aid or comfort to the enemies thereof. But Congress may by a vote of two-thirds of each House, remove such disability.

More vindictiveness is on display in Section 3. Amendment XIV made sure nobody even involved on the Southern side of the war could be in any State or Federal office, IF he had been in an office before and had sworn to uphold the Constitution. I imagine the purported purpose was "we can't have any dishonorable liars who swore an oath and rebelled anyway". Did they forget that President Lincoln had treated the US Constitution like toilet paper? Anyone who worked in any capacity for that President should have been disallowed to hold office too.

The real question is did these Southern men violate their oath to begin with? Nowhere in the US Constitution does it say a State cannot leave.

What a fucking joke! Yes, we ran up this big big debt fighting a war that destroyed the South and killed or maimed near a million young men to KEEP YOU PEOPLE HERE, but you are not to question THAT debt. We're not gonna bail you people out for the destruction we caused either. Amendment XIV, Section 4 was the anti-Marshall Plan! This is more vindictiveness on display by Washington, FS.

The Congress shall have the power to enforce, by appropriate legislation, the provisions of this article.

and then some! Yeah, they've "appropriately" legislated all manner of ills based on this most egregious of Constitutional Amendments Peak Stupidity has blogged about so far. Amendment XIV, in supposedly trying to set one simple thing right, designating freed slaves as US Citizens, was truly one big piece of shit, written out of vindictiveness, and subsequently abused to no end. Two thumbs down!

Moderator
PS: I missed out on that era totally. I remember first seeing the Grateful Dead on Saturday Night Live doing "Alabama Getaway", I believe it was.
Ganderson
PS Not a big Donna fan, but she’s ok on this one. This mini tour was wonderful- the Uptown in Chicago, Dane County Coliseum, the Uni-Dome at the U of Northern Iowa, and Milwaukee Auditorium. A bunch of great shows, all within driving distance of my house, and I didn’t go to any of them. My loss. I did see them at the Uptown in May, however.
Moderator
PS: Oh, and I've got "The Music Never Stopped" in another tab. It's one of my favorites. I have no problem with Donna on the backing vocals or sharing the vocals as in this one, although some die hards are not real fans of her.

This song would be nothing without Phil at the bottom end though!
Moderator
PS: I did NOT mean "not". I meant "now". This was after one proofreading, dammit! Corrected, and thank you very much, Mr. Ganderson..
Ganderson
PS The point of this section was to specify that former slaves were not citizens of the US.
Are you sure you mean NOT?