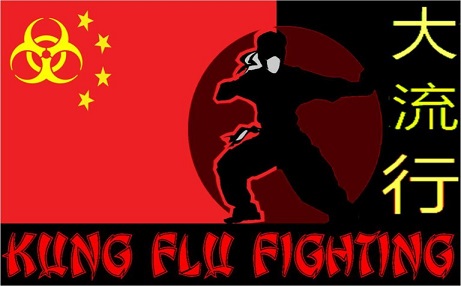 Though I'm still not under the influence of the idiot-plate, I hear tell that this Panic-Fest week has been extended another month or two. Shark-fest week* was long enough - the suspense was killing me (turned out the winner was Saltwater Croc, by a snout).

Yes, I know. This one is deadly. We need to flatten the curve. The virus stays alive for days on metal surfaces. A bunch of people have it. A few have died. Italy! Don't leave the house. Wash your hands. OK, I need to wash my hand more anyway, so I'm down with that last one. Listen, I've been around. I remember quite a few of these viruses coming over from Asia over the last couple of decades. People died then too, mixed in with plenty of other people that were fairly old and/or susceptible to disease a lot more than your healthy < 60 y/o's down to babies**. I'm of the pretty solid opinion right now that this Kung Flu is truly an Infotainment Panic-Fest.

The difference between 2020 and 2000 or even 2010 is the pervasiveness of the infotainment reaching us [not exactly US, Kemosabe - Ed] day and night, right to our person, in the form of the smart phone screen. I've avoided paying attention to a lot of this, but for my wife's serious constant worrying. I'm trying to play along, as she is not wrong on her facts, but on her perspective.

Conversely, though I like the ramifications of the closing of the schools, is that really necessary due to the Kung Flu? The virus will get around anyhow. The kids will be alright. Perhaps anybody very susceptible to serious illness from this virus ought to stay away from the kids for quite a while. That is unfortunate, but that's not as bad as shutting down the economy. More on this, but let me get to Italy.

The one region in Italy, with a bad situation due to the massive influx of the virus from its source in China (not really mentioned enough - see James Fulford today with Italian Virologist: Italy THOUGHT Of Isolating People Coming From China, But "It Became Seen As Racist"—Killing Thousands.) There are too many people with the same respiratory problems for the amount of equipment available. However, I gotta say this: There have been ~ 3,500 deaths from the Kung Flu in Italy over a few weeks. The country has a population of around 60 million, with a death rate of just above 1.0 % (with their demographics that WILL go up - they do not average living to 100.) That's 600,000 people dying a year, or over 1,600 daily. Most of those are old people dying of things that are the things that inevitably kill. It's not fun. We do all we can. Let's keep some perspective, though. It's 10-20 % of the number that will die in the hospital, or, you would hope, at home, from "old age" during this time. This is in a part of Italy that got the worst of it due to immigration practices and Globalization. 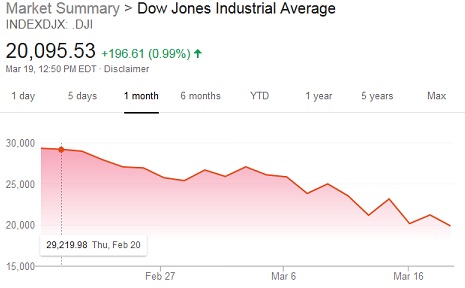 (My sincerest apologies for the y-axis not starting at 0! I will look for a better graph tomorrow.)

What's happened due to this Infotainment Panic-Fest is that the economy has really crashed due to forced curtailment of travel (for international travel, being a very reasonable step), these forced mandatory closures of eating/drinking establishments, and the disarrangement of parents' schedules due to the closure of the mandatory day care , err, government schools. Were this on purpose, I couldn't think of a more devious plan to derail the economy before the 2020 Presidential election. Is it a devious plan? Nah, I don't think the other side is really bright enough to think of it. However, I'm sure they are relishing it in at this point.

Any serious Peak Stupidity reader will know by now (see Global Financial Stupidity) that it's not like we think this ponzi-scheme of an economy was going to keep going anyway. This was as good a time as any to see what it's made of, but I think it's just a taste so far. Face it, a real economy has got to create wealth. Should the travel, entertainment, and hospitality (restaurants/bars/etc) "industries" shutting down mean we are out of business? It shouldn't. You just can't keep running an economy based on people selling each other gourmet hamburgers and craft beer.

In answer to the question posed by this post's title: BOTH. The Kung Flu Infotainment Panic-Fest has triggered a financial crisis, bound to happen someday anyway, that may lead to a SHTF situation, if the media and governments keep pressing their luck and don't leave the people the hell along for a while to get things done.

PS: For further reading, one may look no further than my two favorite literary pundits. Michelle Malkin rails against the airline bailouts (they really ought to have saved more money than they have after almost a decades of great times) - see Crisis Socialism—No Bailouts for Open Borders Globalists!. As usual, I also agree completely with Ann Coulter, or she agrees with me - see Ann Coulter On China And Coronavirus: Cheap TVs, Expensive Flu. Also, one Heather MacDonald, also a well-known pundit, wrote an article in the New Criterion, Compared to What?, that I will not link to, per Peak Stupidity policy, but one that VDare discussed and excerpted from in Heather Mac Donald Questions the Media’s Coronavirus Narrative. That's 3 women writing that stuff! It's not what you would expect out of your normal woman, so kudos to these three!

OK, I just gotta show you the end of Ann Coulter's column:

Italy has been ravaged by the Wuhan virus, but the average age of the dead is 81.

According to the dire estimates of the Imperial College of London—whose assessment we are following—excepting those with underlying medical conditions, the new coronavirus is far less deadly than the seasonal flu to anyone under 60 years old. It’s no worse than the 2017-18 flu season for those in their 60s.

But it's five to 10 times more deadly than the regular flu for those in their 70s and 80s, respectively.

We ought to surround old folks homes with the National Guard and call it a day. It would probably save more lives and wouldn’t destroy the economy.

But there’s no time to think about saving lives. The important thing is to stamp out the idea that a virus that originated in China has anything to do China.

What? Too much common sense?

** In fact, according to a pretty worried Italian doctor in one video, even the neo-natal cases (very young babies) did not get any ill effects from the Kung Flu.

Moderator
PS: I am definitely of this same opinion still, Hail, but not all family members concur. It's a bit of a problem.
Moderator
PS: Yes, you are right, Christopher. I looked back at VDare now and see that they were not referring to her writing IN the NY Times, but the NY Times "missed her [New Criterion?] in Wednesday’s article scolding disbelievers of the approved narrative,..."

I read that too quickly, and I don't click on NY Times anything, if I can help it. Thanks for the correction.
Christopher
PS

I think you've misread this. Heather McDonald's article was in the New Criterion, not the New York Times.
Hail
PS, "I'm of the pretty solid opinion right now that this Kung Flu is truly an Infotainment Panic-Fest" (posted March 19).

From reading your comments on Unz, I believe you remain of this opinion as of today, March 28.

I was of mixed opinion on the CoronaCrisis/Panic, leaning skeptical in February and early March (as confirmable in my Unz comments of the time).

By about March 15-17, I realized something very bad was happening, not related to the virus but to the overreaction; i.e., the CoronaPanic. It was a big mistake.

By March 20, I was a hardline anti-CoronaPanic person, having by then seen enough data to realize that the response was much worse than the virus. After being cautious-but-skeptical at first (first two weeks of March), starting the weekend of March 20-22 and since that time I have been trying to spread the word. I have found very few willing to listen. Some get angry. It feels a little like something out of the Twilight Zone.
Moderator
PS: That's just my personal opinion on the food, of course, Aaron. Every time I watch the Sopranos or the Godfather, I get hungry for that home-cooked Italian food which my home doesn't come with unfortunately.

Thanks for commenting, BTW!
Moderator
PS: Aaron - the best food in the world. But, then again, we can make that same stuff ourselves (my compliments to the Chef .. and Mrs. Boy-R-Dee!).

I've been there, but not everywhere. I gather that the north (incl. where this virus struck hard) is much closer to the NW Euro 1st world than the south of the country.

I do think that the healthcare system as a whole is likely not as 1st world as that in NW Europe and the US. That country goes Socialist on and off like a strobe light. It doesn't do them any favors.
AaronInMVD
PS: One thing being lost in the fuss is that Italy kinda sucks. Sure it had ruins and some folks that happened to be from there millenia ago came to rule the part of the world they knew, but... What does Italy have coming out of it within the past 100 years that suggests the place is anything but third world?
Moderator
PS: Bill, sorry and thank you for the correction. I had that number in my head from somewhere else and should have checked it out better. I will put your data up as a correction.
Bill H
PS "There was a 7% fatality rate." Well, no, you've been reading some propaganda.

So, of course everyone quotes the last one because it is the only one that is likely to freak people out. And they misquote it, making it appear to be the proportion of the ship's entire population. "260 people died !!!" no, 6 did.