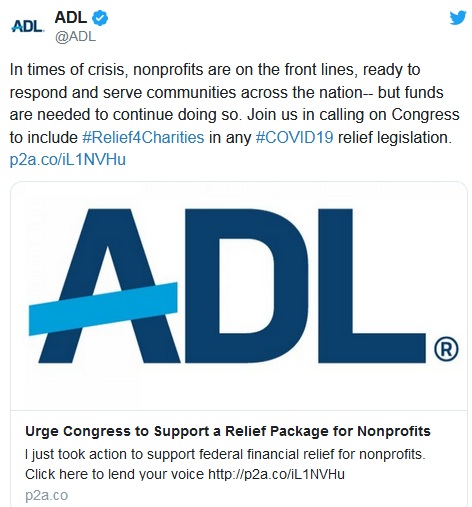 ... for a Non-Profit organization whose sole job is telling people whom not to criticize to ask for "relief" in these times of the Kung Flu. People have been forced out of work, at least in the service sector of the economy. That sector is really close to the whole economy now, so that's lots of people who, because most of them live paycheck-to-paycheck , are in bad shape.

I believe in no bailouts, due both to the moral hazard it introduces (ex: why should I live frugally without student loans?) and this increase in the level of power of the governments of all sorts. Speaking of governments of all sorts, these State bans on all of this, the restaurants/bars and now the groupings of people, should have been defied by all patriotic Americans that aren't worried about getting the virus. That was the old America, I guess. People will let the State take all power away, now - very much like after 9/11.

Wherever the huge amounts of borrowed cash will go, there are a million other individuals and organizations that could use the money better than the ADL would. That is the Anti-Defamation League, formed a century ago to defend a Jewish criminal defendant, but since then seemingly specializing in nothing but telling people whom you can't criticize. You're a Non-Profit, people! Do you get that? You don't have to come out ahead. Just take that money that the idiots donate to you, and spend all of it in whatever stupid manner you like. Now you want taxpayer money? Whatever happened to the appellation NGO - Non-Governmental Organization? You and your ilk pull out that term all the time to try to show you are "unbiased" and just out for the common good. Run along now, and ACT like an NGO!

The ADL is one of a few of these "non-profits" that do hook up with the Feral Government as paid advisors to help determine who is naughty or nice hateful or not. That's what they are "on the front lines of", being the sub-contracted Ministries of Truth, with a big paycheck from us taxpayers already. The other big one is the $PCL, an organization that Peak Stupidity has had absolutely no luck with.

Yeah, this self-induced panic-fest is indeed a "time of crisis". The ADL wants a sleeper-car ticket on the gravy train coming down the tracks. They tweet out that they are ready to respond and serve my community by telling me when to Shut the Hell Up. No! No soup for you, ADL!

Mr. Ganderson, those were Dylan lyrics then. Pretty good, but I never liked his singing voice that much. As far as the Dead version, that wasn't very long before we lost the fat man. #SAD I'll get to Jerry's solo shortly.
Dtbb
PS:Hear! Hear!
MBlanc46
PS That’s what’s known as chutzpah, is it not?
Ganderson
PS
He's sure got a lotta gall to be so useless and all
Muttering small talk at the wall while I'm in the hall
How can I explain?
It's so hard to get on
And these visions of Johanna, they kept me up past the dawn

I’d also point out that the ADL is extremely active in the schools- we have an ADL club - I objected strenuously to no avail.