Is this how you figure Chairman Meow here would be treated in China? 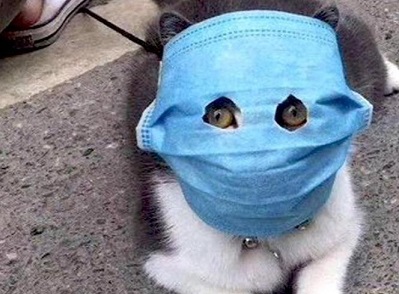 This post is about different kinds of people and their different animals. Is it only the Western World in which animals are treated almost as nice as, and sometimes nicer than, people? Is that only because we have been relatively much more well off? From my experience, the animals we love as pets, specifically your cats and dogs, aren't treated nearly as well in China. Now, that is changing as the Chinese people do get more well off, but I don't know if they'll ever have the love of animals that Americans have.

I chalk this partly up to more space. Where I've been in China, the cat had to be chained to the stove most of the time. Had he gotten outside, that would have been the end of him, at least for this home. I'm not saying he'd been eaten as the next meal. It's more like he'd be run over within a day or less due to the extreme congestion everywhere, or lost and hopefully adopted by another family, and tied down there. It was something I didn't even want to see, his being tied down like that.

We sure have different cultures on animals. There are Americans with all kinds of exotic ones too: llamas, emus (not so cuddly, those emus), and even tigers and other big cats. You won't see the latter, as per the owners' lawyers they are usually behind very tall solid fencing! Think of some of these exotic animals in China, and you know some kind of erection potion, or lucky health food is the normal fate of such beasts.

This brings me to the jokes about the fact that you won't see many cats near the Chinese take-out places, etc ... The average Chinese family simply eats their non-exotic meat as more a supplement to the veggies and rice than as a full solid 5-10 oz hunk, the way we like it. Things are improving, and most are able to get their decent share of protein now, thankfully. Pork is the favorite, as we've mentioned in a post titled The People's Pig*. It is in the southeast of the country, Canton, in the Guangdong province, where the eating of somewhat more exotic creatures is practiced.

This brings us to Wuhan**, with the "wet markets", those crowded markets where live animals of all kinds are slaughtered on demand. I could imagine it being a germ heaven. Bats have been brought up as a possible animal for this Kung Flu to have transferred to humans from. That's one likely scenario, but I'm no expert. These nasty viruses we come upon every few years seem to come from China, and they sure don't come from the cats and dogs that we are so close to here. Oh, and we don't eat them.

This brings me to the spoiled brats. There are plenty here, of course (see the Students and other Snowflakes topic key). I'm thinking, though, of the 1-child policy in China that has resulted in a huge number of only-children in that country, going up to 40 year-olds now. They aren't all spoiled of course, but the number of ridiculously un-grateful, or at least un-gracious, guests and residents in the US (subject for another post too) is probably a result of some spoilage. We have plenty of our own SJWs here, but now we have to listen to American-residing Chinese people bitch about our naming of the Kung Flu.

We covered this bitching already in our post Beware the Kung Flu!, but to add just a little bit here, this is not a blame game. Whether it's the "Chinese flu", "China flu", or our favorite, the "Kung Flu", it's just a simple way of naming the disease after where it came from. Nobody is blaming the Chinese people for getting sick, for crying out loud. Many bring up the good point that the very high level of globalization has let this virus come barging in like mad***, versus how it would have spread 15 years back. Yes, people bring up the eating of bats too, so I suppose that is putting some blame on the bat-eaters, but that's not your average Chinaman. That'd be cats ... no, just kidding ... it's chicken, really ... named after General Tso.

There are the Ron Unz variety everything-is-an-evil-conspiracy types, but I just don't think they have much of a case on this one. The American Deep-State made and spread the virus, the Zionist Jews made it, the Chinese made it - all those have the big flaw of "yeah, but they're getting sick too". Are these entities not of the caliber of your father's Deep State, Zionist Jews, or Chinese CCP?

Let's all just not sweat the naming, and concentrate on the 24/7 infotainment panic fest, shall we ... errr, wait...

The subject of this virus causing worse relations between our 2 big nations is a subject for an upcoming post.


* One of our favorite titles - see also A porcine crisis in China on the recent rationing of this favorite of meats in China.

** No, it's not all the way in the southeast, more east-central.

*** I was trying to estimate how many Chinese travelers come and go during the very important Spring Festival (or Chinese New Years) time. It's hard to check right now, but there were something like 40-50 flights daily on US-based and foreign air carriers direct between the US and China. Some people go through Japan or elsewhere. Excluding those, with say 75% Chinese people on the planes during this period, and an average 300 seats on each, that's 10-12 thousand round-trips daily. Over a spread out 2 weeks, that's 140-170 thousand people coming and going. How many came from Wuhan?

Moderator
PS: Thank you, Rex. That was pretty funny.
Moderator
PS: Ganderson, a cute boy on his tricycle (few years back) riding through campus with me is a chick magnet too, believe you me. Yes, the coed traffic is almost nil.

You can see what I mean then. It takes maybe 10 years of real assimilation, not living in a Chinatown, for Chinese person to pick up this love form animals, IMO, and some maybe never. The black girls, well, they know your doggie is a racisss beyotch. ;-}

I've mentioned to Steve Sailer that I couldn't give a hoot about golf, but the way he's fixated on this Kung Flu, like most everyone else, I should add, I'd rather read about golf course architecture at this point... well almost... From your view, it sounds like he's got his eyes on the wrong holes.
Rex Little
PS No discussion of cats and China is complete without this: https://www.youtube.com/watch?v=Z8zEfYbsrr0&t=1s
Ganderson
PS Anecdotal Evidence. I walk my very sweet 8 year old chocolate lab through the campus of a very prestigious northeastern liberal arts college every day, partly because the campus is quite nice, but mostly because the dog is a coed magnet- the lovely lasses often will stop and pet her, chat with me, etc. I feel you’re never too old to flirt! ( sadly, one result of the kung-flu is that the coed traffic is much diminished)
I have noticed, however, that the OTB Chinese coeds never stop to pet Jasmine. For that matter neither do the young black gals. Not a scientific survey, but it backs up your point.

One corollary of this is, and I hope if my 3 boys learned anything from me it’s this, always flirt with the beverage cart girl on the golf course. Be suave and appropriate, but always chat het up. I’m surprised there hasn’t been an I- Steve post on this topic,
Moderator
PS: No, I sure wouldn't try that either, Mr. Blanc!

We've got a pretty young Mr. Meow (OK, I changed his name for fear of doxing) who will play with my 8 y/o boy more than any cat I've seen. The kid will chase him around, then the cat will run, but come back to attack him from behind, like you'd see on Marlon Perkin's Wild Kingdom.

Instead of tranquilizer darts, we've got 24-round nerf guns, and, of course, the hose. I will tell the cat "hey, looks like rain" and the squirt a jet up into the air and wait 5 seconds. Unfortunately, they learn too quickly.
MBlanc46
PS Little Cecily is generally a very sweet and affectionate feline. But she sets clear limits on what her humans are allowed to do. Trimming her nails is not on the list of allowed actions. Trying to put a mask on her face would bring a response that I tremble to contemplate.