The Yankee and Cuban invasions of Florida

OK, it's time to stop this Corona Virus bashing for at least one post here, and we'll try to do better next week too. You know which side* we're on. I'd like to elaborate more on the short second portion of the post More calls to "Seal the Borders" regarding the near century-long slow invasion of Florida. This site thinks immigration restriction is THE most important issue in America, and even though Florida's problem is half internal, well, States got borders too, you know.


The view of Florida in the minds of the invasive species: 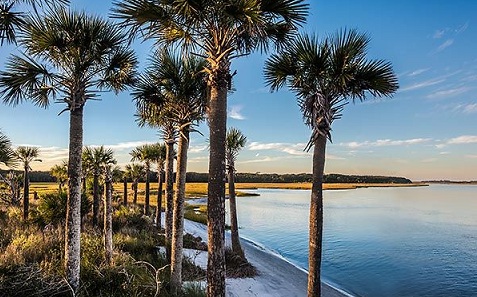 There are plenty of invasive species in the State of Florida - unfortunately for the culture of the Sunshine State, some are of the human phylum. I don't go back that far, but I would call the 1970s the period when due to the foreign influx, big portions of Florida were changed enough to no longer be considered the South, culturally. Miami has always been known to me as the a place to be avoided on trips down to the Keys. Forever for me, it has seemed to be a foreign land within the contiguous US, kind of like Lesotho in S. Africa.

Even with the influx of New Yorkers going way back, other than Miami Beach**, Miami probably was pretty Southern until the invasion of > 100,000 criminal Cubans in late 1980 - thanks Jimmah! I would say by the early 1990s that city was already a far-gone down a multicultural hole, as described by writer Tom Wolf in Back to Blood.

OK, the State could have written off Miami on its taxes, but by about the same time, the Yankees up North had discovered that, "hey, there are nice beaches all over the Atlantic coast of Florida, and a 100 mile chunk on the Gulf of Mexico in the southwest***, and another > 100 miles or more on the Gulf in the Panhandle! Oh, and the real estate is cheap, the taxes are low, people are friendly, and it ought to stay that way, right, so let's all go." (No, it didn't stay that way, because they ALL went.)

The Panhandle seems to not be comprised completely of the usual Northerners, but lots of the retired military crowd, from all the bases there (lots of fliers and such). Then there was Disney World and the associated tourist attractions in central Florida. Florida counties fell like dominoes to the Yankees like the provinces of S. Vietnam to the Commies in the Spring of 1975.

I know we have our Florida readers, such as Dtbb, so no offense really to those individuals who fit into the place. It's just all about assimilation, as far as the ill effects of any type of immigration. Assimilation does not work in large numbers. Miami was the first example in Florida, but all the cities with beaches, from Titusville down the Atlantic coast until the Keys, Tarpon Springs (yes, that's an "r", not an "m") down the Gulf coast to the Everglades, and the Alabama border east to Apalachicola or wherever the beaches end, are no longer Southern territory.

There is a Southern Redoubt still - the region bounded by the I-4 on it's south, the Panhandle beaches (starting at Tallahassee to the west and up to the Georgia line). That still leaves 125 miles of beach on the Atlantic, but it's partially infiltrated too. (Oh, then there's Gainesville, like that Lesotho again.) This Southern territory may not be the land of beach houses, ocean sunsets, and palm trees, but it's still beautiful country. I especially like Dixie and Suwanee counties. 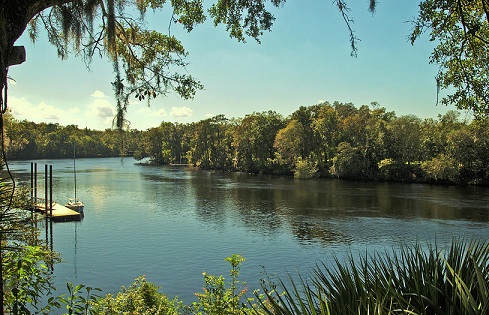 Here is a beautiful photo taken of a stream that leads into the Suwanee River by photographer Paul Marecellini: 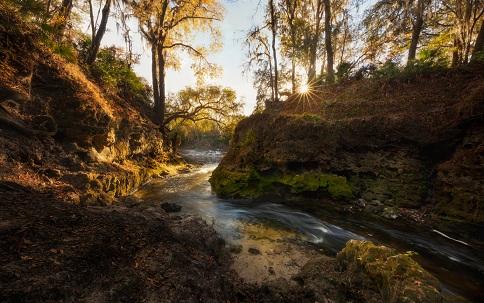 Yes, it's too late to set up road blocks or refuse residency to "foreigners", constitutionality notwithstanding (cause I never have thought about that). Still maybe they should bring back the visa requirement for New Yorkers, especially in this time of contagion.

There's a gator in the bushes, he's callin' my name, and he says "c'mon boy, you better make it back home again... many roads I've traveled, they all kinda look the same ... ♫ 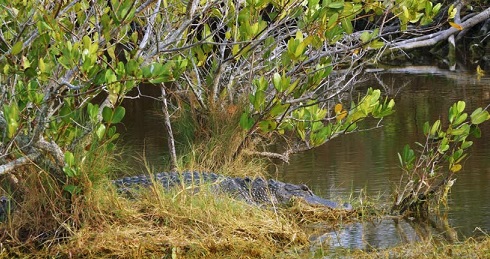 * Yes, there is a real divide in this country that's along unusual lines regarding the Kung Flu. There'll be a post about this coming shortly.

** A Pat Buchanan book that I'm 1/2 way through has a mention of Richard Nixon's thoughts on Miami vs. Miami Beach in regards to speeches he was making, circa 1967-68. It was an interesting anecdote. There'll be some kind of review on the book, The Greatest Comeback, since I went through the trouble to read it and all ...

*** To me, these have the very best beaches in the United States, not counting Hawaii (due to, I've never been there, so I have no data).

In general, as I have observed it, the anti-CoronaPanic voices while numerous are also next-to voiceless, scattered, and marginalized, a situation comparable to a political grouping that is humming along and one day is all of a sudden stunned by a successfully-carried-out coup d'etat in front of their eyes; the grouping is also hit by a portion of its best joining the coup. This leaves the group unsure how to proceed under the new regime and attracting unlikely allies who are against the coup and otherwise also disoriented. (In this case, this being the people who say, "This is the first time I've ever agreed with Trump, but he's right on the need to end the shutdowns;" more often heard when he was still holding the flag for Easter Reopening.)

The above analogy works on some levels but not on others. There was no pre-existing "anti-(Pandemic)Panic grouping" (except perhaps among specialists and experts; now everyone is an instant-expert). This was all out of left-field, and completely new divisions emerged seemingly organically. I don't understand it, but I want to; really a fascinating thing to observe.

And as for the use of the term "coup d'etat." Whereas in Week 3 and 4 of March, I was thinking more in terms of "Corona Mass Hysteria" and even "Corona Mass Delusion," I am now (in April Week 1) thinking more and more in terms of "Corona Coup D'etat," certainly _at least_ as a useful metaphor.
Hail
PS --- "[T]here is a real divide in this country that's along unusual lines regarding the Kung Flu."

The whole thing has been bizarre, surreal. But witnessing a completely new political split that cross-cuts previous political divisions is fascinating. I haven't seen many comment on this.

Steve Sailer, Anatoly Karlin and it seems Ron Unz are all CoronaPanic-pushers. I am not sure what motivates them in this, but probably something different for each of them. I don't know. As a many-years-long Steve Sailer fan, this has been hard for me to see. I just don't understand how it is he has gone so far astray on this; I mean, we need him. (He might think the same about those of us who are anti-CoronaPanic; to his credit, he does not delete anti-CoronaPanic comments.) The commentariat at Sailer's blog and others have also split along unusual lines.

From what I can tell, "they got" Tucker Carlson, too, but maybe he'll snap out of CoronaStupor or maybe it was a long-con all along (which I doubt). (Lagertha wrote yesterday, "Oh, Tucker knows. He needs to slo-mo it; that's effective. He is perfectly aware what the true agenda is. You can't pull all your weapons out at once.")
Moderator
PS: Thanks for the comment, Dtbb. I didn't know if you were a native Floridian or not. I do remember that you know the Tampa Bay area very well.
Dtbb
PS:It's a hodgepodge and it basically always has been. Growing up in the 70's I was a rare native. The history of Florida has been pretty much about people escaping whatever to get here. The Yankees didn't always send their best, but sometimes they did. I tire of hearing how much better things are to the north. That raises the big question, why are you here? My theory is if you can't cut it there, move here.