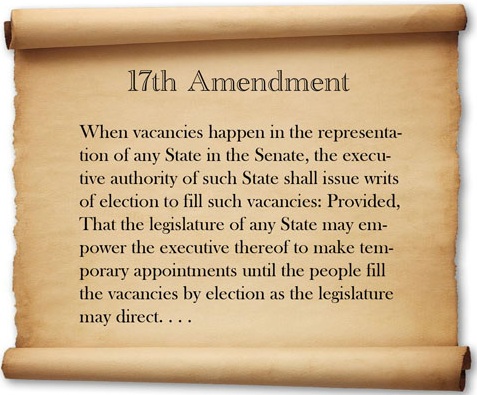 Here's the entirety of Amendment XVII to the US Constitution, proposed in 1912 and ratified by the final state to get 75% of 'em in April, 1913:

The Senate of the United States shall be composed of two Senators from each State, elected by the people thereof, for six years; and each Senator shall have one vote. The electors in each State shall have the qualifications requisite for electors of the most numerous branch of the State legislatures.

This amendment shall not be so construed as to affect the election or term of any Senator chosen before it becomes valid as part of the Constitution.

This seems, just as with Amendment XI (passed only 6 years after the Constitution took effect), to be nothing but an Administrative change or "housekeeping" if you will. No, but nobody goes through the trouble it takes to change the US Constitution just for a bureaucratic rule change. Amendment XVII, providing for the direct election of US Senators by State residents, rather than State legislators, is another State's rights issue that has gone the same way as always, in favor of the Big Central "Federal" Government.

I went to my standard source, Constitution Center to see if their interpretation had anything enlightening about the history/background of this Amendment. There's a pretty good back-and-forth argument on their Interpretation page over whether putting the choice for the 2 Senators with the people versus their State legislators is a blow to State's rights or not.

This Amendment did not come out of the blue. American history had a lot of discussion going back to 1830:

However, starting in roughly the 1830s and then more dramatically after the Civil War, the vision the Founders had—in which state legislatures would deliberate over the selection of Senators—began to fray. First, politicians seeking Senate seats began campaigning for state legislative candidates in a process known as the “public canvass.” The result was that state legislative races became secondary to Senate races. The most famous instance of this was the race for Senate in Illinois in 1858, in which Abraham Lincoln faced off with Stephen Douglass despite neither being on the ballot. In 1890s, many states started holding direct primaries for Senate, reducing the degree of influence state legislatures had over selection. Some states went further and began using something known as the “Oregon System,” under which state legislative candidates were required to state on the ballot whether they would abide by the results of a formally non-binding direct election for U.S. Senator. By 1908, twenty-eight of the forty-five states used the Oregon System or some other form of direct elections.

That's some history I had not known about. Many of the State Legislatures themselves were in favor of direct election, something that boggles my mind.

The push for the Seventeenth Amendment occurred both in state legislatures and the House of Representatives. Between 1890 and 1905, thirty-one state legislatures passed resolutions either calling on Congress to pass an amendment providing for the direct election of senators, to hold a conference with other states to work on such an amendment, or to have a constitutional convention such that the direct elections for Senator could be included in a newly drawn Constitution. Amendments to the Constitution providing for direct elections passed the House in each session between 1893 and 1912.

This was a great shift of power away from the State legislators though. These people are pretty local. Unlike your 1 in 454 Congressman, whom you only get to see close up right near election time without an appointment and lots of time on your hands, most Americans don't know their State Senators' and Representatives' names. If these were the guys and gals that were going to decide who were the 2 individuals to go to the US Senate as 2 in 100, you'd better believe Americans would know their names. We'd make an effort to meet with them, rather than in this era, where the most important thing on their agenda this week might be to vote on the State Insect.

Much of this is due to the even greater number of powers the Feral Gov't has taken from the States, with not a whole lot of resistance, I might add. Nowadays, the point of being in the State Legislature is likely to move farther up than that in politics, not to do a whole lot for the State.

Now, as some of the argument in the Constitution Center's interpretation page goes, the idea of having direct elections for US Senator was to get the corruption out of the process. One might say that now, at least the people themselves can decide the matter, so how can it be as corrupt or arbitrary as before? Yeah, that was before TV and the women's vote (by a p-hair, it turns out). I don't know, read the arguments there, but keep in mind there were the Progressives pushing their agenda even back a century ago:

(Ironically, however, big city party machines supported the Seventeenth Amendment, largely because state legislative apportionment gave greater representation to rural areas due to districting decisions in the absence of “one person, one vote” and because machine-controlled cities could more easily mobilize voters. Many big special interests supported it as well.) William Randolph Hearst famously hired muckraking journalist David Graham Phillips to write an expose, “The Treason of the Senate,” which played a major role in debates around the Seventeenth Amendment.

There were the BS excuses too:

Further, supporters of the Amendment argued that races for Senate swamped interest in state issues in state legislative races, reducing the accountability of state legislatures on any issue other than the identity of Senators.

Yeah, that's it. It was taking too much of their time. Sure... letting them keep too much power, more like. One sentence in the middle sums up the good-intentioned (if I am to be charitable here) reasons for Amendment XVII:

The popular perception that Senate seats could be bought in backrooms of state legislatures fueled support for direct elections.

That sounds very much like the argument for party primary elections (not a Constitutional issue) over the smoke-filled rooms of yesteryear. How's that working out for us? Really, I'd rather have these Senators picked locally, no matter how it can be corrupted. At least a player would have to buy off a majority of 100 or so of them, probably not so easy, versus just throwing money at the media. (Of course, if most Americans paid attention to substance over style, well, again there are those TV and women's vote things again...)

In the old system one could go see his local Rep in the neighborhood and at least have some influence on a guy who lives in his State, rather than the Senator working solely for a gambling magnate who lives in Las Vegas. From the time of the Hildabeast in New York, this has gotten really out of hand. US Senate candidates are picked often from far away places and just plain placed in the race in a State that they have absolutely no ties with, hence these Senators will work for the Party, not their States. Talk aboutcher corruption...

Yep, this was no simple administrative change, this Amendment XVII. It was another abomination in the cause of greater power in the hands of Big-Gov, no matter how they tried to sell it, though a lower-profile abomination than Amendment XVI on the income tax. This survey of the Constitutional Amendments past the Bill of Rights is not going well at all!

Moderator
PS: Mr. Alarmist, I'm not sure what you mean about the 13. Local? The local bodies vary in number, and I didn't want to divulge my locale. ;-}
The Alarmist
PS
Where did you find the other 13 Representatives?
Moderator
PS: Robert, I'd like to read them sometime, the Federalist Papers, that is. Perhaps you could guest-post with some reviews. You're not gonna piss anybody off, as I'm sure they're all dead. Too bad we don't have many people who think like that around in Feral Gov't.
Moderator
PS: Well Mr. Blanc, this Morning Constitutional keeps me regular, haha. This one was not one of my favorite posts to write, but dammit, I'm more than 1/2 way through, and I'm trying desperately to find an Amendment I can be proud of!

Mr. Ganderson - OK, I'm ashamed in front of you, but I just now realized that my favorite Scarlet Begonias/Fire on the Mountain is from this show. I featured it early on in this blog with "The Dead" topic key, but you don't need my posts for this stuff. I couldn't listen to the whole thing last night but got the page still up.
Robert
PS: My impression is that these used be the United STATES --- a coalition of states --- and not a plenary central Gummint running the whole country. That the Constitution had been ratified by those States, and that the Senate was meant to provide some representation for those States.

This Amendment, however, gave all the 'Power to the People!' (Hah!)

I suppose after the XIVth amendment and the late War of Northern Aggression, this was inevitable.

P.S. Perhaps a review of the Anti-Federalist Papers would be a fitting conclusion to this series. It has been almost forty years since I read them, and this series has sparked my interest in re-reading them, but it is always nice to have someone else do my homework for me.
MBlanc46
PS Many thanks for taking the trouble to do this AE. We all ought to know this stuff, but, you know, life’s too short.... Your packaging it neatly and handing it to us on a plate, um, well, screen, is a real service.
Moderator
PS: And the same to you, Mr. Ganderson. Perhaps I'll listen a bit right now.
Ganderson
PS Mr Moderator: Happy Barton Hall Day!