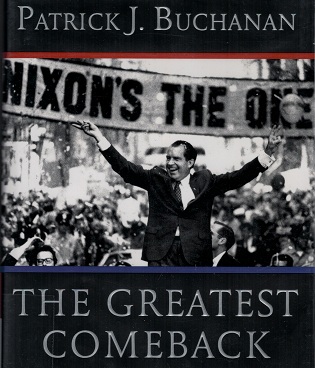 (Well, they won't let me return it to the library, so I may as well review it.)

After a recommendation by one of the unz.com commenters, I slowly read through this Pat Buchanan book, one of many he's written, while travelling. The Greatest Comeback is mostly about just a 2-year period of American political history, 1966-1968, with a smaller amount of background going back to 1964 and a little bit back to the 1950s. There are a lot of interesting small points on this history that will be some separate smaller posts. I've got the book with the pages bookmarked even still for these points, as hey, "I ain't agonna pay no toll fine".

Before I get into those details let me make this just a short review of the book. Though Peak Stupidity has discussed his recent punditry a few times - see Peak Stupidity single-question, single-side-informed interview by Pat Buchanan , Pat Buchanan on American political history - 50 years ago (like a small excerpt of this book, in fact), and Happy Birthday to Pat Buchanan (his 80th), I note there are no other reviews here of any of his books. I remember reading his Death of the West when it came out. He's a very decent writer, maybe better in this biographical-type history than in his polemics. The book will keep your interest, though the suspense may not kill you, if you know the least bit of history. (Spoiler Alert: Nixon won.)

The book is about the Richard Nixon Presidential campaign for the 1968 election. Peak Stupidity has no love lost, as we never ever found any to begin with, for Richard Millhouse Nixon. We read this book through the lens of one of his then closest associates, though, Mr. Buchanan, who, if not in agreement with him, was a loyal associate. He still has much appreciation for the man who hired him for his first political operative job, in 1966. You wouldn't expect him to badmouth the man, even about issues in which future true-conservative Pat Buchanan would no doubt disagree with Nixon on.

The Greatest Comeback is about Richard Nixon the politician. The man who'd been called a loser by the press after his loss to John Kennedy in 1960, and then his loss to Edmund Brown (Jerry's Dad) in the California Governor's race in 1962, did become the consummate politician with a lot of hard work, and well, politics over those 6 years leading up to November 6th, 1968. By "politician", though, I don't mean a man who represents the voters wishes to get into government to change the system. I don't mean a guy who is a leader for a cause. I just mean a guy who was (finally, for him) good at getting enough votes to get himself in high office. The book is the story of Richard Nixon's comeback from loser to winner of the 1968 US Presidential election.

As I wrote already, Mr. Buchanan was not about to disparage the man who hired him (for 1 1/2 the salary he'd been making as a newspaperman in St. Louis, a whopping $13,500!*). The author does, however, tell the insider truth about Richard Nixon's stand on the issues, which was "whatever will get enough votes from enough groups of people to elect me". (Those are not Mr. Buchanan's words exactly, but the gist of them all.) Lots of the 2nd half of the book, with the suspense-filled primary campaign and then general election campaign against Hubert Humphrey and George Wallace, tells the story of how Mr. Nixon would work out exactly how he'd make speeches, answer questions, or treat other candidates, such that he'd minimize the pissing-off of people and maximize the support. Of course, it's not like that's not part of getting elected for any of these guys, and you've got to get elected first in order to implement any policies to change the country for the better. It doesn't sound like Richard Nixon really cared about the latter, though.

Mr. Buchanan relates the story from an era in which the press were not so monolithically one-sided, compared to today, no matter how they treated Nixon early on, through the "you won't have Dick Nixon to kick around anymore" period. It's amazing how close the politicians and print news media were, per this book. Some were on your side, and some weren't, but Mr. Buchanan would arrange for memos to be sent to newspaper editors to explain Nixon's position on such-and-such, and some of these editors would have a big influence on how he stood on the issues.

Mr. Buchanan gives a good description of the big divide among the Conservative, Goldwater/Reagan wing of the GOP and the non-Conservative Rockefeller/Lindsay/Romney (yes, Mitt's Dad) wing. This is a theme throughout the book, with Mr. Nixon being the expert politician who reconciles these wings while not letting any of these people get the nomination in the meantime. The author also brings up the big issues of the mid-1960s that haunt us today (because they were almost all decided wrongly) - the Vietnam war, the Civil Rites BS, Federal Gov. interference in housing, and the "Great Society" Socialism of Lyndon Johnson in general. Some of these will be discussed in relation to this book in future posts, as there are many interesting, but very easily forgotten points.

A few odds and ends: The Nixon campaign, or I guess, Nixon himself, had one weird quirk. The memos back and forth were written with "RN" as the stand-in for a pronoun or the man's name, even when written by Nixon himself. There are quite a number of names thrown around, some of which make the reader think this book would be better in electronic form, with that ctrl-f type feature ("Who TH is Huston again, and where have I seen Dirksen character"). A piece of American political history I didn't know is that President Eisenhower tried to dump Richard Nixon off the VP ticket for his 2nd term a couple of times.

It's a very readable book, as I wrote, for anyone interested in recent American history. Mr. Buchanan regales us with a general description of life in campaign mode, the traveling, high-pressure life of his for those 2 years, and a few funny stories. He almost got his ass beat by some cops who thought he was with the left and then some of the hippies thought he was an FBI guy. Another time, Mr. Nixon asked Mr. Buchanan to be his press secretary, but that lasted about one day! We learn of the more civil and more intelligent world of American high-level politics of the 1960s compared to today's, and one can see from his current weekly columns that Mr. Buchanan seems to think we are still in that world.

How about 4 out of 5 stars for this one?

* From newspaperman to political insider/wonk to TV talking-head to Conservative Crusader politician to unz.com blogger, what a life-cycle. (OK, I know he's all syndicated - I just read him on unz in case I want to make a comment that he's not at all likely to read.)

MBlanc46
PS Thanks, AE I plead senility. This internet thingamabobby can be mighty confusing for us wrinklies.
Moderator
PS: I inserted the name of the man who defeated Richard Nixon for Governor of California in 1962 and the date of the 1968 election (along with correcting the name of Mr. Dirksen) per Mr. Blanc's comment inserted under the subsequent post to this - on the Spin Doctors.