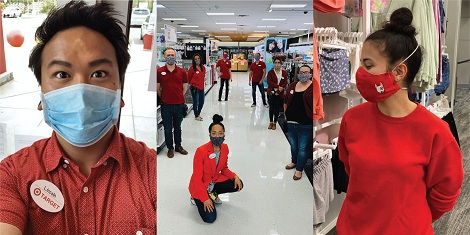 (Note that these pictures are supposed to make us WANT to shop there.)

I read a great week-old anti-panic Kung Flu article by one C.J. Hopkins on unz.com,called Virus of Mass Destruction early this morning. I noted that Peak Stupidity commenter Adam Smith had one of the best comments on there, an anecdotal one, that I'll just paste in here, verbatim (I hope you don't mind, Mr. Smith, as I can delete it if you'd like.):

Thank you Mr. Hopkins for another wonderful article…

The masks, the arrows on the floor, the barriers at the door monitored by masked employees, the charade, it’s all so surreal. It’s like the airport security theater has come to our sleep little mountain town as some weird religious ritual. At least they’re not patting us down at the door… yet.

A couple weeks ago my wife said that maybe we should order some disposable masks.
Naturally I asked, “Why”?

“So you can wear one when you go to the store”, she replied. To which I answered…

“But I would feel like a total retard wearing a disposable mask to the store.”

Last week she finally got out of the house to run some errands with me. First we went to the feed store to get 10 lbs of Kentucky 31 and some rattle can spray paint. Everything there was normal. No masks, gloves or panicfest theater. Off to the bank… She had a few small checks to deposit… We went to the drive through window, all normal… No masks, no gloves, just a friendly, helpful girl behind the window… “Have a nice day” she said. And we were on our way.

Then we went to walmart. At first she said… “I’ll wait in the car.” But with minimal coaxing, (I think I said something like “You should see what’s going on in there…”) she came inside with me.

Barriers at the door, orange flagging tape, all the employees obeying the edict to wear home made masks and bandanas, some of which looked pretty ratty. Half the customers dutifully wearing their masks to protect them from our phantasmic unseen enemy. She did pretty well with all the strangeness. She had not been to walmart in about 5 or 6 weeks. Last time she was there things were still normal, except for the lack of toilet paper, lysol and isopropyl alcohol. She had not seen shelves emptied of flour, pasta, milk, etc… By the time we got to the checkout with the newly install plexiglass, she started feeling a little claustrophobic.

Later that night she told me that she really regretted going inside the walmart. She said she hated seeing the bizarre mindfuck taking place. She told me about how she noticed all the people with masks were constantly messing with them, adjusting them and what not, with their dirty hands, and about how most the people with masks were not even wearing them properly. She noticed how a large portion of the masks looked really shoddy and dirty. She said that she thinks the masks were doing more harm than good. She expects that the mask wearers will soon have trouble with face acne and rashes caused by the masks as it is all so unhygienic. She also noticed how completely useless the plexiglass by the cashier was. It’s all for show.

While I’m glad she saw what’s going on with her own eyes, I’ll be doing the shopping without her until things go back to normal. No need to have her feeling uneasy because of all this irrational perversity.

The hysterical little fascist creeps begging for totalitarianism probably love it.(?)
And they probably expect me to be punished for non-compliance.(?)

I hope all this nonsense ends soon.

Great stuff, Adam! My comment, to add to this, was an anecdote of my own about the Kung Flu Gap in my family. It's getting old too.

This thing is surreal, a slow slide into hard-core totalitarianism right before our eyes. Right now is the time to laugh at these fuckers and disobey with disdain, as there may not be a time to do that later, if we let this go on too long.

I just put on a mask for the 1st time yesterday, only because my wife, who means well, was almost despondent* about my infecting the family (I do some traveling for work). So, I have this one facemask (because I promised and won’t lie to her) that I will pull out of my pocket, put on for a bit, then put back in my pocket – hopefully it’ll be a few weeks of this. I found out a friend with the same attitude was doing the same due to a job requirement.

Were I to go into Wal-Mart, a place I can’t stand anyway – never could find ammo in stock – I would go through without the mask, walk wherever TF I wanted to and let the chips fall where they may (yes, I’d be eating a big bag of Doritos Cool Ranch…)

Well, it was Target, today, not Wal-Mart, and to keep the promise to my wife, I had to deal with the stress of wearing the face mask, as much as I could stand, anyway. I went in and got my stuff, well sort of. Though, Corporate Target policy does not call for the "did you find everything OK?", or it's been waived for this "difficult period", no, as it's a problem getting a baseball glove for a kid when he can't go with you to try it on, NO, I sure didn't. BTW, before this promise, he's been all over with me... shhhhh...) I had to buy 2 gloves, one that I have to return, so this deal will costing me more time and aggravation later.

Speaking of time, I got pretty worried when I saw the line of partly filled shopping buggies backed up across the first aisle then well into women's lingerie. If this were, I hate to divulge, but let's say 20 years back, I'd have had no problem at all with that last part. As they say, you can learn a lot from a dummy. ;-}

Anyway, they had this one line splitting into 4 or so registers, so that part wasn't too bad. There were marks on the floor. Due to my not being a prisoner at the penitentiary, I have no concern about marks on the floor. I talked to the women ahead of me who turned out to be a nurse. No comment from her on her perspective of the Kung Flu was forthcoming - yes, I gave mine, explaining the mask.

The whole damn environment was bugging me, however. Then, as the checkout girl behind the 2 ft wide piece of plexiglass* (with infinite airspace on the sides), she told me I needed to back up to "behind the belt". That just pissed me off and confused me. I could see "behind abeam the belt", but behind the belt would have put in the middle of a bunch of gum, candy, and magazines about whose butts were getting bigger during the Hollywood LOCKDOWN. I backed up somewhat, and was very very close to just stating to anyone within earshot that this country is now run by hysterical menopausal women. That could easily have offended some of the customers, especially the many menopausal hysterical women.

The fact that I was wearing the mask made this "shopping experience" much worse for me. Were I flouting the convention, as I had been doing, I think it would have been better. Now I gotta go back and return the one glove.


* Could it have been Lexan instead? I thought that was only for the high-end stores like Sack's on Fifth Avenue. Oh, I totally forgot: Peak Stupidity readers, go long Lexan! I don't usually give stock tips here, but this was a no brainer ... last month, I mean, when I meant to give out this tip ...

Adam Smith
PS:I am very lucky to be in such a wonderful place.

I have a million dollar view of the mountains for less than a thousand a month. I am one of the luckiest people on earth.

Fun story... I was sipping a beer after work yesterday, sitting on the porch, when an adolescent black bear came wandering though the yard. It's been a while since I last saw a bear in the yard. I'm thinking about putting out some bird seed so he comes back more often.

"Thanks for your anecdotes and opinions both here and on unz.com. Keep on fighting the good fight."

You too Mr. Moderator. You too.

Moderator
PS: I appreciate your concern, Adam. It sounds like you are in a good place during this time, and just a good place in general.

Thanks for your anecdotes and opinions both here and on unz.com. Keep on fighting the good fight.
Adam Smith
PS:Good morning to you Mr. Moderator...

I don't mind at all. I consider it a compliment. Thank you.

Sorry to hear your wife is feeling disheartened, but it's understandable, as the whole show is discouraging. My wife oscillates back and forth. One day scared the next day tired of the charade. Some days she's even a bit angry about the whole thing.

She's been back to the walmart with me twice since I posted that comment. (It's the only grocery store in our little mountain town, except for the granola store, which really isn't a grocery store but a tiny little health food store. We could however get bread flour there when the walmart ran out.) Both times she found herself aggravated by the time we reached the checkout. (We love the people at our little walmart. We live in a place with very kind, sweet people and the cashiers at walmart are no exception. She usually hugs some of the cashiers when she sees them.) She doesn't like feeling short tempered. It's not the cashiers fault that they have to deal with this nonsense and creepy corporate diktats. But she finds herself a little heated by the dog and pony show. I think it all starts with the useless barrier at the door with the flagging tape and the masked employee counting heads. The ominous announcements to “maintain social distancing” and “wash your hands” over the speaker system isn't helping either. It's orwellian. It's dystopian. It's bullshit. It's a mindfuck.

No one here is paying any attention to the stickers on the floor. I guess none of us are ready for penitentiary life just yet.

I still have not donned a mask. I will not wear a mask to go to the store. It's as ridiculous as it is useless. (At least in it's current form.) The only mask I have is a paint respirator with charcoal filters, but apparently any old piece of t-shirt is sufficient. I'd say about 75% of the customers were wearing masks the other day. I'm sure some are true believers in their masks ability to protect them from our invisible enemy, but I'm equally sure some feel peer pressured. It's a weird social conformity experiment. A new division we Americans did not have before. Propanic/Antipanic Promask/Antimask

I think the real split is AuthoritarianFollower/Libertarian and panicfest has made the divide more stark.

I'm sorry to hear you had to deal with the extra aggravation of wearing the mask, though I do understand and appreciate your decision. Best to keep harmony. I hope your mask wearing alleviates her fear of infection.

I sure do hope this nonsense ends soon. I would love to be able to buy fresh linen scented Lysol again one day. It comes in handy when detailing the car.

Anyway, we are headed to the HomeDepot today for some paint and some red impatiens.

I hope you have a great day Mr. Moderator.