Peak Stupidity will start a series on our guesses about the winners and losers out of this Kung Flu Panic-Fest response. This won't be about stock tips (hey, you should have asked me last month, I coulda' told ya'!). It won't be particularly about politics, just because I think we all know how all that is headed. It's that this major disruption to the economy will change some things permanently, not all for the worse ... I hope.

This will be a start, just because it's something I noticed last week, AND, it's my try at fair use at this blog. I gave the Chinese a hard time about their superstitions on Wednesday, so why not give Americans a hard time about something, other than the normal stupidity that is usually world-wide.

While walking around in a mid-sized city far from my town last week, besides the ghost town of the rest of downtown, I came across an empty riverboat, like this: 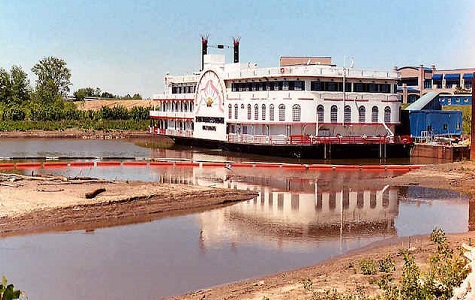 Here's the deal with this stupidity. Gambling, uhhh, OK, gaming is bad, mmmkaay? Now, my feeling on that is one thing - see Lotto, tax on stupidity , for example - but I am not the type to deny people's perfectly non-violent desires. Yeah, but governments at all levels say it's morally bad, and therefore you can't do it ... except, I mean, if they get lots of tax money from it. Then, you can do it. (This is the very same thing I noticed with the old "blue laws" about serving liquor in bars on Sundays. It's bad, mmmkaaay, but if you pay $150 for a permit, EACH TIME, then, sure, knock yourself out!)

To work this out, many States have this deal where you can't be on land in the State to have gambling. You must be floating on some body of water. Why this, I have no freakin' clue, and rather than look it up, if one of the commenters could chime in, I'd be highly appreciative. Try explaining it in a way that makes the rule seem to have some semblance of logic, if at all possible. I

kind of wonder if you can do gambling while airborne in some of these States. You wouldn't make money that way off of nickel-ante poker and slot machines (just too damn heavy too), but get 8 high-rollers in a blimp ("excuse me, it's an airship, Sir!" says the fat Captain), and who knows?

To work this out, lots of gambling venues are on American rivers, on big Mark Twain-looking ones that probably can't get 10 ft. from the dock under their own power, if any. I don't blame the owners - the government incentivizes gambling only on the water, and you have no ocean shoreline, so that's what you get.

Because of the Kung Flu, though, they are closed, or at least in my visited location. They looked pretty eerie, sitting there. That's got to be a big blow to city revenues, along with the a blow to the owners, of course. There is big money in this gambling business, explaining why it's profitable to build a big 1850s-style riverboat that never goes up and down the river!

When they are allowed to open up, will they attract large numbers of gamblers, still? Lots of these places get visitors from out of town, and people may not travel on business jaunts as much, having gotten used to Zoom or what-have-you. Do pleasure travelers, or the locals, for that matter, have money for this? I suppose some of those CARE checks may get blown in one evening by the many irresponsible Americans who live nearby. Boy, that's not a good thing.

I'm sorry for the city officials who depend on these floating gambling houses for lots of revenue, but people may get used to not gambling, at least in this manner. They say it's addictive though, even though, thankfully, I have nothing in my brain that can understand why.

What next for these palaces of immortality? Well, if I put it that way, I would suggest turning them into brothels. There will always be money in that sort of thing. Then again, it's illegal, but not if governments work out another idea so crazy it just might work. Or, fuel being cheap for now, they could fix them up so they COULD go up and down the river, as riverboats are supposed to do... taking passengers from whorehouse to whorehouse, all the way down to New Orleans, which was the ruin of many a poor gaming operation. Mark twain!

(Yes, of course, I could not NOT have CCR in here. Why does John Fogerty pronounce the words like that? The guy was from Calilfornia! Still, his was the best voice ever in rock&roll. It's inarguable, as they say.)

"You must be floating on some body of water. Why this, I have no freakin' clue..."

The "Law of the Land" or what I refer to as "common law" does not apply on water as that falls under "Maritime" or "Admiralty" jurisdiction.

The Mississippi river is a navigable waterway whose open travel is protected by treaty.

The "Law of the Land" does not extend beyond the shoreline.

I hope you have a nice day.
Moderator
PS: This one is not one of my favorites, simply because I've heard it too much, I guess. I've featured this great band before - one of the best, indeed!
MBlanc46
PS Ah, Creedence, one of my favorite bands during my youth.