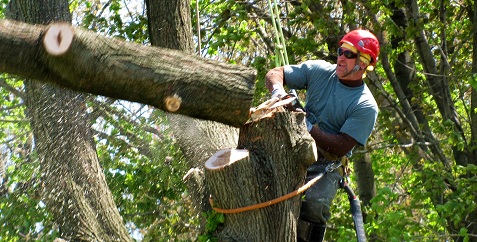 There was a group of about 6 guys, with a whole bunch of expensive equipment, at a nearby house to take down a large tree today. This kind of work is not for the soi-bois. It is a dangerous job, even with all the great equipment they have today.

The group that I saw was indeed diverse, though I doubt out of political correctness. The tough guy way up in the tree was a white guy, and there was another, probably the owners. There was a Hispanic guy that was operating the chipper and a few other guys to drag wood around. I think one was black.

After having written the post on Saturday, called Idle Hands are the Devil's Workshop, I thought I'd add this one to help bolster the point. This is real man's work. It's hard and dangerous, but with good money involved. You need to take care of the equipment and repair it sometimes. It keeps the mind and body well occupied.

Therefore, you wouldn't expect any of that crowd, whatever color, to be part of the rioting crowd (either faction, the black looters/vandals or the white commies). Some trouble around the area was only a few miles away, but you wouldn't know anything about it, and I doubt these hardworking guys had time to check up on their phones (maybe just at lunch).

There was nothing said about any of the trouble by the neighbors as some of them chatted for a while while watching this work get done. Outside and away from the Infotainment is a good place to be. It's that hard work and sense of accomplishment afterwards that clears the mind of any thoughts similar to those of the nutballs and thugs doing their thing in the inner cities of America. I've been there (no not way up in the tree, but doing hard manual labor). Too bad more of us can't be employed in this manner, or employed at all, for that matter.

In all fairness to the retirees, plenty of city people have left metro Atlanta and landed here. I can't blame them. It's nicer in the mountains.

I don't think covid is a threat to the rioters, antifa, thug or otherwise. (Wouldn't it be wild if we were wrong?)

Glad to hear you didn't ace the mailman or yourself. Gotta be so careful with trees and chainsaws.

There wasn't any trouble with the vet. He's nice. He was kinda feeling us out budgetwise with the tooth thing but communication with him was over the phone, not the usual face to face interaction. A girl met us in the parking lot and took our cat inside because of the "no more people allowed in hospitals" rule that recently arrived in our notsobrave new america. That was a little odd. Other wise it was all good. I can check his sugar but I cannot check for feline leukemia, parasites and thyroid problems so easily. It's money well spent to know what the problem is.

Meat is what cats have evolved to eat. Your wife is doing the right thing.

Moderator
PS: Adam, thanks for the stories and info as usual. I hope you can stay in your quite mountain town even while all the foreign (to you all) riff-raff retirees "Californicate" the place.

On your point about the COVID-19, yep, I was going to write something about this latest experiment. I'm pretty torn, as I don't think the disease is that much of a threat, especially in these summer months, yet I wouldn't mind if a bunch of antifa and black thug rioters came down with a few (hundred thousand) cases.

I tried my hand with a new-to-me chainsaw and almost picked off the mail man. See, I knew where this tree was gonna fall, but there's noise even at idle, and I took a look around before cutting that last web of wood. I heard a crack, backed off, and then saw the mail man coming into the area it was falling on (it'd just been a few skinny branches, but still). He said "no problem, I heard that crack!"

I guess your 2nd cat lucked out big time. That's too bad about all that trouble and money at the vet. My wife spoils our cat with pieces of meat every night. (OK, we all do, but she's the worst.)

Yeah, I live pretty far out, but not as far as I'd like. In the last 15 years the city has encroached and the population has almost doubled. A little more than a decade ago U.S. News and World Report and some other retirement magazines ranked this as one of the best places to retire. So the retirees came...

And then they wanted city folk retiree stuff, like the new library, and the new "Justice Center" that we didn't and don't need, and street lights around the "city" and more traffic lights, and more cops, and higher taxes, and a new 6 million dollar swimming pool, and a 2 million dollar JROTC facility, and the new water treatment facilities because city people don't drink well water... You get the idea. They're not from around here. [/rant]

Fortunately I don't live in the city. And when I say city it is still small by most city folk standards. The city has about 10,000 people while the total county population is about 30,000. Half the county is national forest. There are 10 traffic lights in the entire county.

You are correct. All is quiet and normal here. If the internet went out I would not have noticed that America had a level 5 chimpout over the weekend. Looks like all that lockdown/panic stuff went well.

On the bright side, we'll know soon enough if SARS-CoV-2 is as deadly as they say. It looks like all sorts of aerosol transmission is happening at the various riots across the land. If covid19 is really a threat there will be tens of thousands cops and protesters dying on ventilators in urban hospitals in the weeks ahead.

Tree work is dangerous business, especially for the climbers. It gets more dangerous with the biggest, heaviest trees, as you can well imagine. I think the worst are the trees with internal rot or termite/ant infestations. Sometimes they can be very unpredictable when you cut into them. I'm merely a novice when it comes to trees and chainsaws and fortunately I've had good luck with the trees I've dealt with, but I've helped with enough big trees around here to see some really dangerous shit. You've got to be so careful when removing trees.

“What I really didn't like was his starting out at a totally ridiculous price just to either a) see if I was really clueless and would just say "sure!" or b) in order to keep the bargaining at a higher level. I don't like being bullshitted.”

I know what you mean. No one likes being bullshitted. We took our boy cat to the veterinarian over the weekend. He got sick about a month ago and lost 3 lbs. He's been eating very well, and is in good spirits and playful and all, but he just won't gain any weight. The vet tried talking us into removing his chipped tooth for $300. Bullshitter! His tooth is not the problem. I think he was fishing to see what our budget was. 350 dollars later we learn that he is diabetic and that his thyroid, kidneys and blood pressure are great. No feline leukemia, cancer or parasites either.

Then the vet talks us into some prescription food. We get the food home only to find out it is high in carbs and low in protein. Pretty much the opposite of what he needs. For the cost of this prescription food our little friend can eat steak. So now the cats get to eat chicken and salmon instead of dry food. They both seem pretty happy about this. Now that we know what the problem is he won't be going back to the vet for a follow up. We can get a glucose meter for $10 if we need to.

I hope you have a great day.
Moderator
PS: Dtbb, it's a great feeling to have really built something. I suppose it all depends on what you define as "building", as those hard-working black guys or Mexicans that lay down asphalt for a highway, etc. may believe they are the ones actually building the Interstates. But I put it this way - without the guys planning/designing and managing the work, there'd be no roads.

Adam, that's right you live way out there. I guess there is nothing to speak of going on special up there, right?

Mr. Blanc, I hired specifically a white crew for the roof, but I gotta say, they were about to leave out some wood work if we hadn't seen it (part of the deal).

For a big tree, we got a black crew for which the boss is a friend of my friend. He sat in the wheelbarrow supervising, a bit too old by this point to be up in the tree, The guy BS'd me on the price though. The job took 7 hours, not the day and a half he had told me. They made a killing on me, even accounting for the equipment. What I really didn't like was his starting out at a totally ridiculous price just to either a) see if I was really clueless and would just say "sure!" or b) in order to keep the bargaining at a higher level. I don't like being bullshitted.

The little business was so unorganized on the business end (the owner is always borrowing money from my friend) that his wife called me a month later "Hey, when would you like to have the tree taken down?" "Doesn't the boss tell you anything?", I said. I thought later about the idea that perhaps the owner wanted to pocket this cash separate from any ideas of his wife, the "accountant" of the operation. Geez!
MBlanc46
PS The outfit we had to take out three dead fir trees last spring was owned by white guys (one of which was on the site), but the guys doing the work were Mexicans. Well, we hired them because a neighbor told us that their price was reasonable. All very hardworking and efficient. I’ll bet that had at least five or six jobs scheduled for the day. Definitely not social-chaos makers.
Adam Smith
PS:Good afternoon Mr. Moderator...

"Some trouble around the area was only a few miles away, but you wouldn't know anything about it..."

Trouble, eh? Did I miss something over the weekend?

Dtbb
PS:Constructing a large building from foundation to roof is very trying, yet very fulfilling. When I am a passenger in a car I am always pointing and saying "I built that". Of course it was a huge team effort, unfortunately mainly mexican.