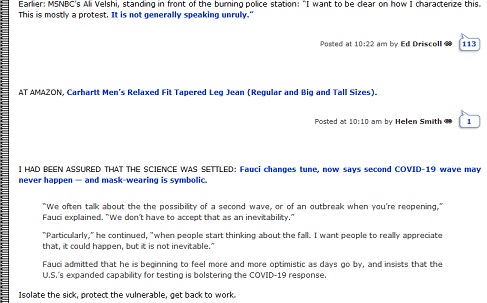 A few weeks ago, I'd decided to ease up on the addiction I've got for the Unz Review site. That didn't take as much as I would have liked. However, in the meantime, I felt lost without a go-to website for whenever I got a hankering to sample some stupidity. (That's not the sites themselves, but what's discussed in the stories therein.) It's been quite a while, but I went to check out my old 15 years-ago-favorite, Instapundit, possibly the longest-running decently-known blog out there.

Glenn Reynolds, a Professor of Law at the Univ. of Tennessee, has written many short posts a day for something like 20 years! He has had to at least skim a bunch of articles in his down time, in order to at least point out the gist of each one, and sometimes a pretty good blurb about them. In the last few years, maybe as much as 10, for all I know, some other bloggers have taken up some of this work. I recognize some of the names but not all.

Anything by Helen Smith, his "insta-wife", seems to be her advertising of various products from Amazon. She used to write some normal posts in the past. Hey, I've got no problem with these plugs - it beats the heck out of little boxes or videos jumping around the screen, stuff getting grayed out, or the whole site bouncing around like a pinball until it stabilizes almost a minute later to graciously let me finally read the damned text.

There has been commenting on the site for a goodly number of years, but I still think of the site as one without comments, as it was in the old days. It'd be a different story if I could just put in a fake email address and start writing (actually it'd be a bad thing, as I waste enough time), but one needs to be a Facebook member, twitterer, or one of 2 other icons that I can't make heads or tails out of to comment. I looked through a small sample of comments, for just one post, and they sure look pretty civil, informative, and erudite.

The content of the posts is still to my liking. I remember Professor Reynolds being something of a neocon way back after 9/11, but I didn't notice any of that. Instapundit is still a great site to spend down time perusing, as it highlights the stupidity of this world just as good as back in the day. You won't run out of things to read (the posts almost always refer to other articles/sites), as often by the time you look into a post and come back, there's more!

I guess that was an updated review that I can paste under the Peak Stupidity site review here.

It's great to see that Instapundit is still doing a nice job and hasn't gone stupid over the years. Glenn Reynolds is a big dose of sanity in this world of insanities. Thank you, Professor Reynolds!

Yeah, Ganderson, I don't hold people's youthful political views against them, if they at least ever learn something. I gotta say, I had a short period of being sympathetic with the lefties, but it was 2 or 3 years and not hard-core. It never really took.

I've always thought Glenn Reynolds was an honest, clear-thinking, and level-headed guy.
Ganderson
PS Don’t hold his neo-connery against him- I myself had a touch of that virus- more than a touch, back in the heady days of 2001-2. I was even a DFLer in my youth.

I have become increasingly pessimistic, though. I feel like I’m living in Germany, 1931.