"Karen" and her dog: 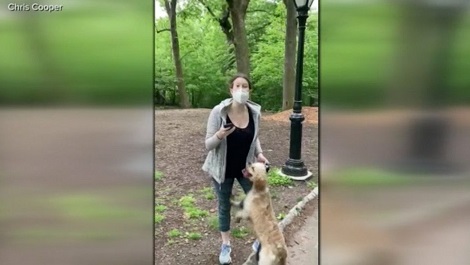 Once again, we at Peak Stupidity take pride pride in our un-timeliness. This story seems ancient, anyway, though probably 2-3 weeks old. It was one of these viral deals that the Lyin' Press decided to make a part of national Infotainment. There doesn't have to be anything really important, outstanding, or unusual about any of these "big stories". They decide at this one fits one of the narratives, and, if you partake in the infotainment, well, you're going to hear about it, like it or not.

That was the girl dog-walker in Central Park from a couple of weeks back. No, I don't think she was actually named Karen, apparently a term of non-endearment these days for white ladies that take the rules (too?) seriously. "Karen" was not the best choice, in my opinion, as it's just not a common name at all for anyone under 50 or so. Because I met a young (20-something) lady named Cathy the other day, I realized that it's another name from the past, for the most part. You don't meet many young Cathy's, but maybe they go by Katherine or Catherine, which is pretty nice, or its variant Katrina. (I like the latter because it reminds me of Katrina and the Waves, which reminds me of their one hit song Walking on Sunshine.)

Oh, if you don't know who I'm talking about still, it's probably just as well. I won't go through the details, but the lady had her doggie off his leash in Central Park, NY City, a black man bird-watcher (no mere jogger, he) complained to her, she then ignored any admonishment, and he then said words, as he videoed the scene, that could have been understood as threatening. She called 911, the story went viral, blah, blah, blah.

I don't really care for either side in this conflict. To me, the quick take-away is that recording of still and especially video with smart phones just ups the ante in any situation. Could these 2 people not have come to a simple understanding, or, usually more in the case of 2 guys, said some words (a few "oh, yeah, you gonna make me?"s and that sort of thing), and then just walked away from each other, each with his own version of "what an asshole!" said under his breath as he walks away? Once the cops are called, keeping this occasional simple, mildly unfriendly human interaction to just that is out of the question. If it happens to go viral, well, then the SHTF for, not all involved, but at least whomever is lower on the PC totem pole.

That's what's happening with these "Karen" viral incidents. Even in this most feminist of societies, white women can't be assured of getting all the breaks anymore. This is not One Day at a Time or Mary Tyler Moore. There are black people involved often, and the tie, or even any close match, goes to the black party.

I kind of like the long-term implications of this. Peak Stupidity has maintained* the the Welfare State that has been implemented in American, mostly since 1965, but arguably earlier, has had a bad effect for men involved in marriages. Women nowadays have an upper hand, as they have Big State as a husband-in-waiting if they find out that they are "not happy" at some point, any point. Besides the family court lawyers and judges ready to screw over hard-working men, and the children, of course, to help poor unhappy damsels in distress and the welfare money of all sorts, there is also CPS and cops ready to barge in at their beck-and-call. The number is 911.

Well, this "Bad Karen" phenomenon is making this reliance on the support of husband Big-State, who could step in at any time, not always a good bet anymore. When there are black people (probably any other privileged folk too) involved, there is a big dilemma - will the phone call and husband Big-State, cause her more trouble than benefit? He may decide to knock her around more than Stanley Kowalski rather than bail her out. That's figuratively what happened to Central Park Karen, as she ended up getting fired from her nice finance job, embarrassed all over the internet, and even had her dog taken away. (That last part is complete bullshit - I don't care who you are.)

The way things have been going, 911 doesn't have that same cache now. I mean, cops may come eventually, sure, but you may be the one getting hauled off, or at least made to look stupid. One can no longer depend on the kindness of strangers dispatchers.

If The State is no longer the White Knight for these damsels-in-distress, who they gonna call? Perhaps they should try to get along a little bit better. As far as husbands go, I suppose, as the white guy, you still don't have much of a chance ... unless you take a video that goes viral. "Karen! Karen!!!.

Well, if you don't have Elaine exclaiming "Stella, Stella!" in your head, you are probably still stuck with Katrina and the Waves. Why not? Walking on Sunshine, their hit from 1983, is a favorite of mine. It's THE hit from the album of the same name by this British/American band. (Katrina Leskanich is American.) What an upbeat song!

PS: I did watch A Streetcar Named Desire once on DVD, but the plot with all the gossip and such is hard to follow. I really only got interested after that Seinfeld episode in which Elaine, high on muscle relaxers, yells out "Stella, Stella!" No mas!

* Though, truth be told, I haven't found a post here in which this was specifically stated - perhaps it's time for one.

Moderator
PS: Thank you, Mr. Blanc. We try, but not for too awful long, with the titles. Some are hits, and some are misses.

As to what you dubbed the "Hierarchy of dogmas", it's complicated, but not for the white man. We are pretty sure where we stand on this deal.
MBlanc46
PS Perfect title AE! It’s one of the strongest points of this site and.
Adam Smith
PS: Good afternoon Mr. Alarmist...

"Does black trump trans, or does trans trump black?"

This is, without doubt, one of the most importantest questions of our troubled times...

I think Black trumps Trans but Trans Women of Color trump cisgender Blacks because of Transphobia, an irrational fear or hatred of Trans people, as well as cisnormativity.

However, Fourth Generation Holocaust Survivors™ who identify as Trans Women of Color trump them all.

"Even in this most feminist of societies, white women can't be assured of getting all the breaks anymore. This is not One Day at a Time or Mary Tyler Moore. There are black people involved often, and the tie, or even any close match, goes to the black party."