The current situation in gentrification nation, for your edification

You've got a point there, homies. 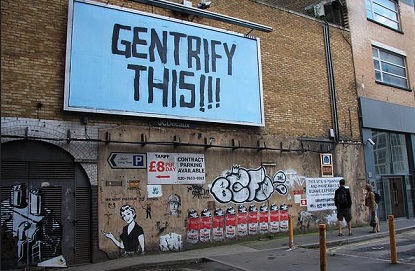 Riots discourage gentrification. There, I said it. I mean, when you want to fix up that old early 20th century classic brownstone, paint it up in pastel colors (what?), then be able to amble over to the coffee shop or bicycle store, and walk to your information age workspace up that loft, it's really discouraging when you know that the street may be filled with ghetto thugs busting up windows at a moment's notice. They may not even spare any of your hard work, even though, had they read your tweets, they ought to KNOW you are on their side in the struggle against ... whatever...

I remember first hearing of this "gentrification" process in Geography class long ago. An example we discussed was a hillside full of old beat-up homes mostly occupied by black residents, that were bought and to be torn down for a development of newer, bigger houses. This hillside was close in to the city, so a desirable location.


Yes, it does. That's gonna happen. 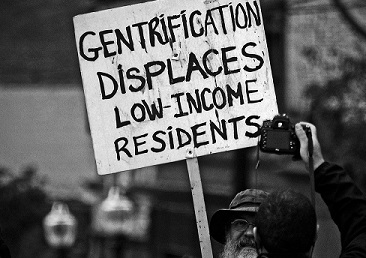 Business is business, after all. Yeah, we get nostalgic, and some things really are a shame. "I used to ride my bike through there as a kid." "They're ruining an iconic area of town." "They gotta put up these thin pastel boxes, when those 75 year-old houses are still holding up nicely!" Sure, but one is perfectly free to put his money where his mouth is and buy up the whole neighborhood to rent out to the same people who might (and... might not) take care of the place. Knock yourself out... or let someone else do it, whatever...

Here's an important point though: Any complaints about gentrification by resident owners themselves are really complaints about the idea of property tax. After all, nobody's got a gun to your head, I mean, when there are no riots going on. You've been used to cheap living in a nice area, specifically because not many of the gentry really want to live by your sorry asses. Maybe they are wrong, but money talks.

You don't have to sell out. You can ask for a price that will allow you to get a house in a nice neighborhood elsewhere, but you may not get it, so stay then. Yeah, but taxes are going steadily up. Right, you are! That's the problem, not who's moving in nearby. Peak Stupidity is of the opinion that property taxes are the most egregious taxes of all, above even the abomination of income taxes. (See our series regarding the Federal version - Part 1, Part 2, and Part 3.) After all, if you want to lay low, make small money (avoiding most income tax), be thrifty (avoid most sales tax) and live the minimalist life, they still will come after you if you don't keep paying on the shit you paid for in full! (If you didn't pay in full, you are really in better shape in this topsy-turvy world that rewards the irresponsible - just walk away, or leave it by the side of the road.)

Californians long ago ran into this dilemma of rapidly rising property values and therefore rapidly rising taxes, causing long-term residents to have to move out. They couldn't keep up. The revolt against this caused the adoption by the California government of Proposition 13, way back in 1978. Good on 'em!

That's what the problem with gentrification really is about, for the residents. However, we hear complaints all the time from residents and others that this is some more egregious racial injustice. (If I don't write "egregious", you can't get that Sharpton/Jackson voice in your haid raahht.)

Here's the thing, OK, black people: Most of you yourselves, and almost all the white people want to live in the safest area they can, especially if they have children. However, all the convenience draw of the city is very nice too, so they would also like to have at least teensy-weensy parts of the inner cities back. You all have had them for 55 years. How's that shit been working out for y'all?


This is all they are asking for: Un-condemned structures and coffee shops ... 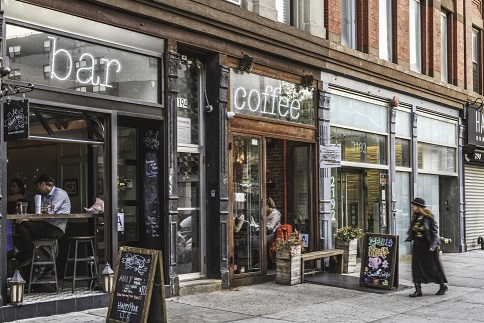 ... well, and decent neighbors and not so much of that ghetto rap music after, I dunno, 11?


For some reason, when it's Hispanic people displacing black people, say in large areas of Los Angeles, we don't hear the complaints of "gentrification". Yes, there are complaints, but Hispanics are not up for being guilt-tripped. They bought the houses fair and square, so get out of our barrio, pendejos!

You won't even hear large influxes of Oriental people or .Indians being called gentrification, even though these people put up with your asses less than the young white people. Think of the big money Chinaman that have bought up, and bid up, lots of houses in the West Coast cities of the US and in Hongcouver, BC, Canada. I just don't hear a lot of name-calling there.

Who are these gentry, anyway? I've read of the "landed gentry", and the word comes from descriptions of the British classes. From Merriam Webster, we read

1a : upper or ruling class : aristocracy
b : a class whose members are entitled to bear a coat of arms though not of noble rank especially : wealthy landowners having such status

2 : people of a specified class or kind

3a : the condition or rank of a gentleman
b obsolete : the qualities appropriate to a person of gentle birth

So it doesn't have to be white, people, but that's apparently the modern definition. Anyone else can move in, and bid up RE prices, hence, taxes, to the moon, Alice, but that's OK, I guess.

This post was to be about the effect of the riots though. The gist of it is this: After the residents of different American cities had had a long time to forget, and the younger ambitious residents not knowing about, the long bout of destructive rioting by blacks during a major portion of the 1960s, many tried to move back. This gentrification is of a neighborhood at a time. It's not some planned-out, big takeover, mind you, just non-black people wanting to live the city life.

There are plenty of examples all over, but just to think of one, there is the Brooklyn borough of NY City. I don't know how long it's been - 20 years, maybe more. It takes a while to rebuild. These folks spent the effort and made a nice place for themselves.


Not Brooklyn, AFAIK, but same idea: 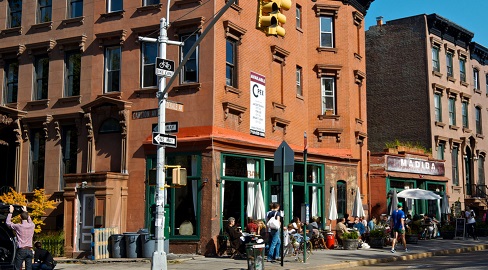 The large-scale rioting has come back with a vengeance, and to some locations, say Minneapolis, it's come for the first time. How bad will this set back the gentrification efforts of hard-working people?

PS: Commenter Ganderson gave us a brief history on race relations in Minneapolis/St. Paul in his comment under the post Snow Town is now Bro Town:

A bit of history- in the 65+ years I’ve been on earth there has been a black presence in the Twin Cities, two neighborhoods in Minneapolis- the North Side, where there were “call out the National Guard” type riots in 1967 and the area surrounding 4th and 38th near where the current fracas began. St. Paul’s Selby-Dale neighborhood was predominantly black as well.

As one other commenter noted there is a large Indian neighborhood in Minneapolis, although not particularly dangerous- run down, but the crime was mostly low level public order stuff. The black neighborhoods were more dangerous, but not on a South Bronx level- I’d never think of not driving in any part of the central cities.

Since I left, two other groups have been added, Hmong tribesmen from SE Asia, the influx of whom was beginning at the end of my time there, and the Somalis. Neither has made the area better, and added to that the pull factor of generous welfare has drawn many black Chicagoans (the weather is not that much worse). Milwaukee, BTW, has the same problem. While there are still some very nice neighborhoods in both MPLS and St. Paul, many whites have left the city- most of my HS classmates have decamped for the suburbs.

NOTE: Out 'o time! May add some more later today.

Moderator
PS: Haha, give me a few days to mull over the term, but JCoS is fine for now, Mr. Blanc.

Your "South Side of Chicago" brought back the first line from the Paper Lace song "The Night Chicago Died". If it wasn't on this blog (I'll look later), it was probably under a Steve Sailer post, but I noted that if you compare the black-on-black (and sometimes white) violence in Chicago today compared to the worst mob violence of Al Capone's time, the black violence is at least an order-of-magnitude higher!

In 1952 white people could still sanely live in the downtowns of American cities. Brother, what a night it was, err, what a country it was!

In both cases there would be people caught in the cross-fire, but mob killings were a pittance compared to the numbers one can find on 2ndCityCop or HeyJackass (not really sure where the name came from on that latter).
MBlanc46
PS I’ve lived close enough to some serious ghetto (on the South Side of Chicago) to know what happens when blacks take over a neighborhood. I remember playing on the parkway in front of my great uncle’s apartment building on the 4400 block (if memory serves) of South Drexel in about 1952 while my mother and grandmother visited my uncle. A white person wouldn’t want to be found there in broad daylight now. How I’d love to see whites take that street back. It probably won’t happen, though, because it’s too far from the university. I want whites to claw back every square millimeter that they can. However, I’m realistic. Blacks aren’t going anywhere, as much as the “deport them all” guys would love that. Blacks will have to live somewhere. The best solution that comes to my mind is for blacks to have autonomous areas, rather like Indian reservations, where they can live how they want to live. Abolish the police? Fine. Knock yourselves out. Non-stop partying? Be my guest. But not to be allowed into white (and I imagine Hispanic and Asian) areas absent strict controls. We need a catchy name for such a policy. Jim Crow on Steroids? I’m sure that the Mod can come up with something better. That’s his speciality.