The country is going to COVID hell, but check out this Precor treadmill console!

No, Hanna is not this blogger. Please don't send love notes and chocolates! 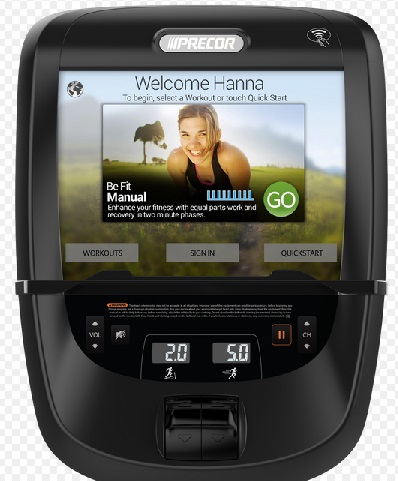 (This is likely the console of the machine in question.)


Along with our main focus on high-level stupidity, the Peak Stupidity blog has a few sub-fixations, of which the reader will be forgiven for skipping entirely. The posts, with the Topic Key Artificial Stupidity, about exercise machines, are in this category. Anyone still reading? OK, for some background, see Peak Torque, Wattage, and Exercise Machine electronic stupidity, in which there are links to previous posts on this subject. (Some of them, BTW, are linked to another main stupidity fixation of this site, the incessant need to insert TV EVERYWHERE, including in the displays of these machines. Often it takes effort to figure out how to turn the crap off!)

Well, this post is good news on the exercise machine stupidity front, at least regarding the treadmills. However, to make this post more interesting and related to the Kung Flu madness, as this anecdote is, in fact, I'll put this in the proper time order, so this first part will be more up in our recent wheelhouse. Glad you kept reading? See?

On this business trip, I ended up in a State in which the Governor has been quite a dick regarding the LOCKDOWN rules. Hey "dick" is just the word that was bandied about in conversation with someone at the airport - I'm just the storyteller, though granted I used the term first. This lady agreed that he was indeed a dick, as she confirmed that THE LAW said that gyms, including hotel fitness rooms, must still be closed in the State.

The young lady related to me that at her apartment complex, there was a "don't ask, don't tell" policy, and the same for the swimming pool. Plenty of people used the workout facilities and the pool anyway, but were any State official to see this, the management office would simply be SHOCKED, SHOCKED, I tell you, that High-Impact, Cardio and Marco Polo are going on! (That'd be along with guys like me, getting done with the workout, standing to the side and doing all sorts of trials on different speeds and slope settings to see if there is Artificial Stupidity going on too.)

The hotel staff told me apologetically that the fitness center is closed. I checked it out, late at night. There was a sign on the door with the bad news, but... the key card worked. In the early morning hours, I went down there, and worked out in near darkness, a nice experience. I was spared the effort of having to find a remote to turn off any TVs, and there was no one else there to desire to blast out Infotainment, so, yeah, it was an good workout.

What made this even better was that the treadmill was one for which I couldn't have specified a better console myself. "Console" is the word they use, not "display", as I found out in searching for images for this post. It makes sense, as that includes controls and the display. I believe the reason I've had a hard time getting model numbers (to discuss here or just for knowing what would be the best purchase, if ever) is that these consoles are probably interchangeable on a lot of the basic treadmill mechanical units*. 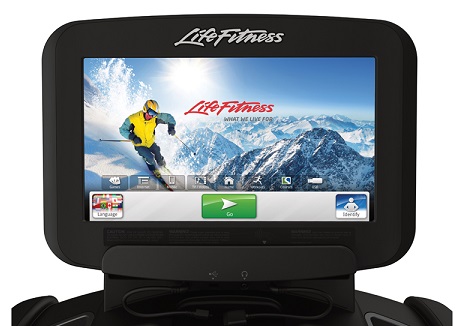 (Some of the Life Fitness consoles are pretty good too now.)

Do the good people at Precor corporate, marketing, or engineering, read Peak Stupidity? One wonders, as where else could they have gotten this feedback? Did they just contract with a mechanical engineer or physicist for a day to get proper numbers on calorie burn, METS, and that sort of thing based on realistic values of exertion at different speed and slope combinations? They got this one right. I spend long past my cool-down time doing trials - 0 slope and raising the speed 1 mph at a time, same speed and raising the slope 1% at a time, another speed with the varying slopes, etc.

I didn't keep all the numbers in my head, as it'd have been hard to jot them all down in the dark, for one thing. There was a basic low-end calorie burn number at 0 slope**, a change in burn (work done) with slope (the junkier consoles don't do this), and the usual increase with speed. The increase with speed was not linear after a certain point, either maybe over 6 or 7 mph. This makes intuitive sense to me too. The type of running involved could be more biologically work intensive.

Someone put some real effort into the software calculation in this console! Additionally, this one didn't even have any TV to offer, which was really nice. Along with the touch screen, needed to get started, there were 2 large, wide momentary double-toggle-action switches that were used to change speed and slope. That is so nice, and the right way to do things. Having to screwing around on a touch screen with sweaty fingers while you are trying to keep running like hell is not . One can change settings that way, I think, but these big "paddle" switches are the cat's meow.

The whole console on this Precor machine was the best I've seen yet, Kudos to them - if I ever determine the model number for sure, I'll post on it.

Oh, did I wear a mask, the reader may ask. Haha, I can see a heart attack happen there, as an obedient fitness enthusiast does what he was told by the Governor... well, except the breaking-in part. Himmm, that'd be a great case. Who's responsible? Never mind, who's got the deepest pockets, the State government, the hotel, Precor, who should have had a warning on the display. I can't breath, indeed!


PS: Upon finishing my workout and machine trials, I looked for towels or wet wipes of some sort to wipe down everything for the next guy or girl. Nope, there was nothing, because, after all, the gym is LOCKED DOWN. I really meant to bring a wipe (that my wife had forced on me) with me, but forgot. Hopefully my Kung Flu or any plain old regular germs won't last on these surface till the end of the Governor's orders, or the next person who undergoes a surreptitious workout, whichever comes first.

* At the hotels, they are mostly very solid commercial types. I've not had a problem with too many of them being cheesy mechanically speaking, as of late.

** This one was based on the weight input by the user. Excellent, as, of course it should go up with user weight on uphill runs, but even at 0 slope it (meaning 0 mechanical work being done, only internal "biological work" by the muscles) it should.

OK, anyway, I kinda like the scenes in which you are running through the woods ...

... right behind Hanna, that is, in bright green jogging shorts.
Federalist
PS

I don't have strong opinions on treadmill consoles but I would rather look at Hanna than the skiing guy.