Steve Sailer on the End of Gentrification 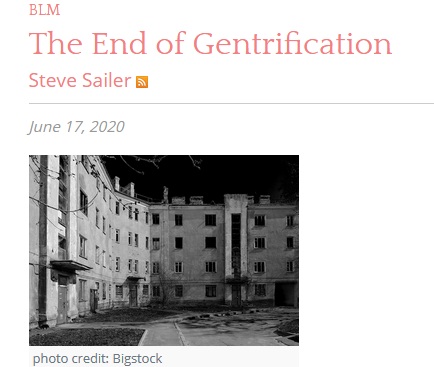 Just 5 days after Peak Stupidity's post The current situation in gentrification nation, for your edification, Steve Sailer published a very good article with the same theme on the Takimag site*, called simply "The End of Gentrification".

I don't at all think Mr. Sailer got the idea from Peak Stupidity, but it's nice to see he would agree. These subjects, racial behaviors due to economics, black crime, differences in city neighborhoods, etc. are some of Mr. Sailer's "core competencies", as the HR ladies like to call that.

One can also see the difference between Steve Sailer's writing and mine. I really don't like looking stuff up in the middle of a post, unless it's really necessary. For areas that I have common sense experience in, but not very specific knowledge I don't give many numbers, though I probably should more.

Here at Peak Stupidity, we, meaning me, write opinion, commentary, and speculation, without much analysis. I have a technical background, and making good estimates comes easy for me. "We" are usually right, but "we" not being a sociologist and having a day job, just don't have time for getting into details most of the time. In the words of Edie Brickell (and the New Bohemians), I know what I know, if you know what I mean.

Mr. Sailer has thought of the subjects in this (another) great column of his for years and years, as I've read in his blog posts. Not only does he give lots more background that our post on the cop/city relationship and crime history of New York City, he has kept track of black homicide in other cities, with an emphasis on the changes during and after the Ferguson, Missouri riot-fest of '14. I'll just excerpt a decent amount here, but PLEASE read this whole article. It explains a lot.

And the earlier period in which the influential sided with blacks over cops, from the end of the Kennedy Era to the end of the Carter Era, saw the murder rate double nationally, destroying many American cities.

Lindsay, a handsome WASP, had sided with blacks against the city’s Irish policemen and Jewish school administrators.

As usual, the cops responded by slowing down on the job: the retreat to the doughnut shop. By one estimate, NYPD cops got down to doing about two hours of policing per eight-hour shift. After all, you can’t violate anybody’s civil rights while eating.

Haha! That's not just a good background, but great writing too!

We mentioned the NYC borough of Brooklyn in our post.

White residents fled many neighborhoods, such as the once-tranquil Bronx (where Ogden Nash had complained in 1930 about the lack of excitement with the couplet “The Bronx?/No, thonks!”), which saw reported burglaries increase by 1,559 percent from 1960 to 1969. In turn, the white population of the Bronx fell nearly 50 percent between the 1970 and 1980 Censuses.


Due to the crack wars, homicides peaked under New York’s only black mayor, David Dinkins, at 2,245 in 1990. Then murders suddenly fell under Republican Rudy Giuliani from 1,946 in Dinkins’ last year to 649 in Giuliani’s finale. It is said that Giuliani managed to get the NYPD to put in four hours of real work per shift.

Moreover, to the surprise of everybody, murders in New York City continued to steadily decline under subsequent mayors Michael Bloomberg and Bill de Blasio, although briefly blipping upward in late 2014/early 2015 while BLM was riding high in NYC. But then the NYPD more or less mutinied against the mayor; he backed down and murder once again started to fall.

Killings bottomed out in 2018 at 289, the lowest number since 1951, back when Joe DiMaggio played for the Yankees.

What'd we tell you?:

This incredible 87 percent decline in the number of killings is one of the great urban success stories in American history. It contributed to an enormous increase in property values. Although the Bronx has never recovered, most of Manhattan and then much of Brooklyn was gentrified.

Not surprisingly, this also engendered intense resentment, especially among blacks who feel entitled to live in some of the highest potential real estate in America. While it is polite to claim in public that whites unfairly wound up with all the Magic Dirt in the exurbs while blacks were forced to live on the Tragic Dirt conveniently close to downtown, the truth is that postwar black neighborhoods tended to be located desirably near jobs, airports, parks, and other amenities.

Finally, we get some predictions of what will be done next by our benevolent Feral Government:

The Democrats do well with metropolitan whites who aren’t needing to flee for their lives. But safe streets depend upon arresting numerous black thugs, which is now out of fashion. It’s a difficult conundrum for Democrats.

Therefore, we are likely to see an increased Democratic effort to revive the Obama Administration’s Trump-canceled Affirmatively Furthering Fair Housing scheme and other ploys to transfer ghetto blacks out of the cities to exurbs and small cities. This will be framed as not just good for the blacks, but bad for the small-town whites, who deserve it.

I believe Mr. Sailer does know what motivates these local and Fed politicians, even though they probably don't analyze things as he does. They do want to screw us, though, no matter what reasoning behind it could be. Watch out, suburbia, exurbia, and Mayberry, RFD! You ain't stayin' out of this fight.

The weekly columns by Steve Sailer in Takimag are some really good writing. I hope you will at least check out this one (it's about 5 minutes' reading, max).


* I don't know if I've mentioned that Takimag changed its format completely 1/2 a year to a year ago. That turned me off of it, as I saw no reason for this. It just makes me have to learn the site again for no gain. It's not that hard, but a real pet peeve of mine. What's the point? I need to keep up with Jim Goad there though, as, besides Mr. Sailer, he's my favorite writer on there.

MBlanc46
PS “those were our neighborhoods” not “those were out neighborhoods”.
MBlanc46
PS I have dim, childhood recollections of the South Side of Chicago before it was over-run by blacks. I believe that I mentioned my great uncle Frank’s apartment on South Drexel Blvd in a previous post. I didn’t actually see the results of the black invasion until I was an adult and moved to the University of Chicago neighborhood for grad school. In the 1950s, the University had actually discussed abandoning Chicago and decamping to Palo Alto to merge with Stanford. Apparently it turned out that they were too legally bound to Chicago to take anything with them. Like the endowment. So they turned Hyde Park into a fortress to keep the neighboring blacks out. They certainly opposed integration. I mention this simply to indicate that I have some psychic investment in the issue of gentrification. Those were out neighborhoods. Our ancestors built them. They are our patrimony. I want them taken back. I’m quite sure that the “urban pioneers” have quite different motives. The developers, of course want to make a profit buying cheap and selling dearer. And the pioneers want reasonably cheap real estate that they can turn into hipster paradises. I’m happy enough to see them succeed and claw back our cities block by block. On the other hand, it doesn’t break my heart if the elites can’t keep the rabble from looting and burning the hipstervilles. Developers always take a risk, and the pioneers are for the most part loyal Dem voters. Gentrification—their name for reclaiming our spaces—had some positive aspects, but the gentrifiers were never honest with themselves about what they were doing, and sometimes dishonesty ends badly. If you’ve just dropped $250K on a condo that’s only going to decrease in value because the cops won’t defend it the next time some black criminal is killed by a cop, that’s not my problem.

Re Taki’s mag. I was a regular there until they eliminated comments. My tagline was “Come for the articles, stay for the comments”. The articles were mostly mediocre, but there were some great commenters. I haven’t been back. I get a precis of Steve Sailer’s article at unz.com. Bugger ’em.