Missouri, US, and World numbers: 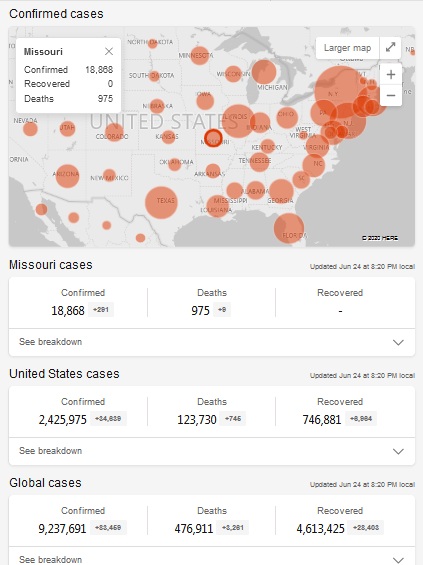 (See that "+8" for the day - it's tough with this reduced grapic, sorry. Just for reference, in the neighborhood of 170 people die in Missouri on an average day. Shouldn't we be talking some more about high fructose corn syrup instead?)


It's heating up again, that nasty Kung Flu. No, not the disease, so much as the rhetoric and Police State build-out, is heating up. I suppose this month of black/antifa rioting, oops!, protesting, I mean, was a nice break. Man, we've got to get back to this pressing problem and clamp down some more. I mean, shoot, we broke 120,000 deaths like, a week back, though it sure took a while. (It even went down one time. Whooh, that was scary - see COVID-one-niner Death Count Hemoraging.)

We've been told that wearing masks anywhere in public will become law next week(?) in our jurisdiction. I'm not doing it. I believe more and more this stuff is being pushed for more nefarious reasons than the power-tripping of State and local officials. The people behind this are getting very good at scaring people who don't have enough perspective. Let's use ours.

Since the June 1st graphic that Peak Stupidity used at the top of our post I miss my Kung Flu TV, 17.2 thousand more people have died with or from this corona virus. That's in 3 1/2 weeks, which means about 750 people/day nationwide. Even if we assume every one of the really died FROM this disease alone, we ought to remember that right around 10 times as many die each day in America on average. This is significant, but if you took out NY City, for which not many of us really care about who dies there, it gets a lot lower in significance.*

Again, if you are very vulnerable, do what you feel is prudent. If you know someone vulnerable, take some precautions. However, this is no big rebound. 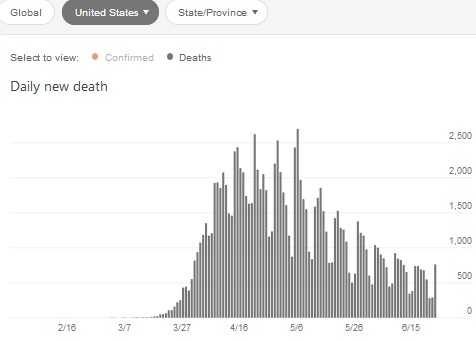 Again, for some reason I can't seem to find a nice line graph for US deaths, but the graph above is better than nothing. This graph is current, BTW, right up through yesterday, June 23rd. Hmmm, is this a reason for a KLAMPDOWN, or LOCKDOWN 2.0? Look at the graph, or better yet, look at this one: 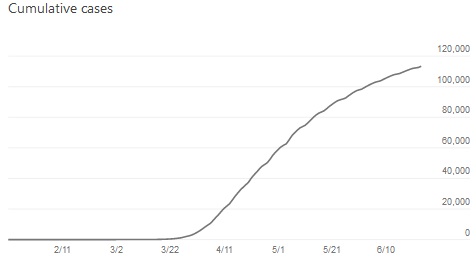 This one if for the whole country too (when I saw New York, the State, it showed the same leveling off). I'm not sure why this one doesn't match the number 124,750 seen at the top here, as it also goes through June 23rd. Again, where's the rebound even in CASES, as they (my wife?) keep noting?

As we noted in the post Social Distancing Waivers from right just over 2 weeks back, this rioting business has been an experiment. We wrote that, though, 2 weeks AFTER this Floyd Infotainment race-guilt-fest started. The experiment has had time to run. Are our betters, our experts and those that tell us what rules we will live under next week, trying to say that the experiment proved that this stuff spreads easily and is still a big killer? If so, as stated in our post linked-to above, the people who encouraged the race panic are murderers.

I don't think they are in this sense though**. There has not been a rebound, and the conclusion from this experiment in extreme un-LOCKDOWN is that it didn't matter.

I don't think our "betters" care what those results are. They are pivoting back to the Kung Flu panic now with a vengeance. Just when we thought we could start living almost as freely as in 2019, which was not very damn much to begin with, they pull us back in (side)!

Micheal Corleone on the renewed LOCKDOWN:

Where have you gone, Michael Corleone, our nation turns its LOCKDOWNed eyes to you... whooh, hoo, hoo...


* Of course, then there is the affect of most of these deaths being of people who would have died in the next year or few years, meaning the numbers over a year or two will show a modest stretched-out blip, with maybe a dip afterwards to even it out.

** Though they are very much so in other senses, regarding race relations and the anarcho-tyranny produced by the instigators of the riots and cultural destruction.

Adam Smith
PS: Top of the afternoon to you Mr. Moderator...

June 8, 2020 Tulare County reported 2,212 total coronavirus cases.
More than half of the county's positive cases (1,112) were due to person-to-person contact.

And raise you one guitar solo...

Though clearly New Haven is no New Hampshire. Live free or die!

☮
Moderator
PS: I should have known that Rush would be one of them, Mr. Smith. On the Van Halen, OICU812 has been one of my favorite album titles, if I got that right. Let me tell both you guys now - it's all fun and games until 9 digit numbers start giving hits!

Apr 4, 2020 - The state Department of Health Services announced Saturday there are 2112 positive cases of COVID-19 in Wisconsin.

May 3, 2020 - There have now been 5150 cases of the coronavirus reported in Montgomery County — an increase of 5% since Saturday.

It seems to work with most four digit numbers too.

Maybe it is not too surprising.
Robert
PS: Just got back from Karaoke night on the patio of the local (mediocre) pizza place. Lots of fun.

Zero masks, zero (anti)-social distancing. Although there are a lot of zealots here, the 'common' folk do not care. I think that for a lot of these people, even if they did believe that this whole Covid thing was so terrible, Church and family, beer and guns, are more important.
Moderator
PS: Mr. Hail, regarding your 1st comment here, I didn't know it was near a million of these "refugees" One million people is 10% of the population of the whole country. That is suicidal!

On the COVID death count: I understand the excess death business, and your quick calculation. Like you say it's a little more complicated. Let's say every one of the 126,000 death really was FROM the COVID-19. That just means that just over 1/2 or so of them, had this disease kill them in lieu of whatever else may have shortly after from another major killer (cancer, heart disease) anyway.

It's really hard to separate this from these being deaths just WITH the virus, as if you talk about a weekly or even month-long time line, people's bodies just get hit hard by the inevitable, and does the exact final straw matter anyway? (It does, if you get more funding for a certain determination, of course.)
Moderator
PS: Thanks again for the legwork, Adam. Those ones would make a splash in certain places. Yes, bring out yer dead, indeed. (I put the Monty Python video up already.

That gas mask thing is a cool idea and is something I've seen already, but I'll be danged if I know whether the guys wearing them were doing it ironically or not.
Hail
PS

Reproducing this of interest (from https://hailtoyou.wordpress.com/2020/06/16/against-the-corona-panic-part-xiv-total-mortality-data-in-europe-now-confirms-the-wuhan-coronavirus-was-comparable-in-magnitude-to-flu-waves-of-the-2010s-the-panic-and-lockdowns-are-fully-discredit/#comment-46656):

This simple calculation suggests the magnitude of "deaths of other causes, but -with- the virus" vs. "deaths -from- the effects of the virus." Excess deaths are less than half the number of "COVID19 deaths," suggesting a small majority of the "COVID19 deaths" are people dying anyway who happened to have a certain flu virus in their systems at the time which the media pro-Panic forces have been so obsessed with, a procedure never before followed in flu epidemics and the tracking thereof.

Reality is a little more complicated, but it’s for certain that a very substantial number of the media’s figure is padded with “deaths of other causes dying imminently anyway but who were corona-positive at death.” We’ve been saying this all along.

Hail
PS
I feel like I say this a lot but it's worth it each time:

The epidemic curves in the US all look pretty much exactly as they do in Sweden which avoided the whole mess of shutdowns and Panic (though they did, from media reports, get some spill-over of maoist race-cult activity; race-rioting in some areas there is not unusual; why they have chosen to bring in almost a million mainly young refugees in the past ten years alone, I don't know).

There is no rational purpose to any of this.
Adam Smith
PS: Good morning Mr. Moderator...

Robert said he has worn one of these masks...

I think these look good too...

Bring out your dead!

Manatee County has five percent of the state's 629 COVID cases

With six fatalities due to the infection, the city (Chandigarh) has reported 420 COVID cases so far.

☮
Moderator
PS: Mr. Adams, thank you very much for the links to your suggestions for Coronawear! Were you the one that wore a Black Plague (beak-type) mask or was that another commenter? If you have a link, that'd be great too.

Mr. Blanc, that's possibly what it is. I never thought this was all about Trump, but for some it is, I guess.

Mr. Anon, I guess with everything on the web and enough "jurisdictions" or what-have-you that have all manner of numbers, it could be the case that that is legit. One of the weirder things that I mentioned on this blog (it's no longer the case) was that on bing searches for images, any images, if I had Corona or COVID at the beginning, I'd get that thematic map I show above every time. I had to make an effort to put in different words to fool the algorithm.

Mr. Anon
PS I saw this in a comment at Zero Hedge - type the following string into Google:

You will find a news story from somewhere in the World with that many COVID cases reported. It's weird.
MBlanc46
PS It’s been my opinion for some time that the Dems would try to push the panic through early November. For a while it looked as if the riots might push the virus off the stage, but that appears to not be happening, at least here in deep blue Illinois*.

* Most of Illinois isn’t deep blue of course. Outside of the Chicago area, Illinois is Indiana or Kentucky.
Adam Smith
PS: Good Afternoon Mr. Moderator...

I'm thinking about getting one of these so I can go to Costco...

☮
Moderator
PS: Robert, no I don't mind the links at all. I'm thinking of a Rebel flag bandana, but can't even get myself to go searching for one. (I could just get a small flag and fold it up right, I guess.)

We will see how this plays out where I live.
Moderator
PS: PPPM, Thanks for the comment. They can't find me. Missouri was just a ruse, man! Hahahaaa! I'll just keep shouting out "Black Lives Matter" and drinking water, giving me plausible deniability.
Robert
PS: Luckily I have not had to deal with any rules about universal mask wearing. I don't think I would co-operate, but predicting things is hard.

If the worst comes, could you find or fashion something like this crocheted mask (minus the backing, of course):

I have worn this:

plague doctor mask a couple of times. If you don't need glasses, it is not bad.

But, other than going to Church, I have never been told to wear a mask; and there everyone knows me, and they just figured, 'Well, that's just Mr. X.' (Not my real name.)

P.S. If you don't like such commercial links, please delete it, or this whole post.
Pretty Pink Panty Mask
PS-No mask? I'm reporting you to the BLM/Antifa National Police Force for wrongthink comrade.
Forward! Yes we can.