Yeah, the title* is from some either Jackie Chan or Bruce Lee movie, one. "Little China" is Hong Kong, until it gets assimilated - could be soon. a John Carpenter adventure/comedy movie starring Kurt Russell (there's a funny guy). (Thanks to commenter Dtbb for the correction.) 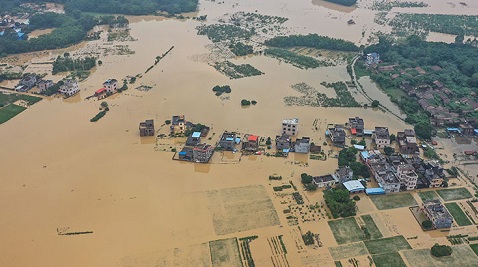 Just over a week ago, Peak Stupidity posted something on the flooding going on in China - see More Damn Quality Problems in China about the huge Three Gorges Dam. It's not the catastrophe that some news articles are advertising (yeah, fake news is world wide), but the flooding is just so widespread. Agriculture will suffer, from what my China source discussed with me.

From my China source, I heard that there is a lot going wrong in China, and these are medium/long term things too. This is not even about the Kung Flu, for which the Chinese response is widely touted by Totalitarians as "the way to do this". They may indeed suffer more from the Kung Flu, but not the disease so much, but the Chinese governments' responses. Again, what's new?

It can't be argued that China hasn't gone through an amazing economic transformation over 45 years, but mostly over about 20-25 years. Whether you want to call it an "economic miracle" or give credit to the American elites that gave away metric shit-tons of manufacturing capability, along with the Chinese policy of subsidizing exports is up to you. Peak Stupidity has seen first-hand, and touted, the amazing work that has been done, and is being done, on the infrastructure in the Middle Kingdom - see A Peak Stupidity apology to our Chinese readers, for example. As we stated in that post, Peak Stupidity will call out the bad along with the good.

A lot of big changes and long-term government policy is coming to a head there. The one-child policy** that was put in place after Mao died (not arguing over it right here, mind you) has changed the demographics drastically. The cheap, but smart and hardworking, labor force that made China THE place to manufacture anything is gone. They are still smart, probably not quite as hardworking, but definitely fewer now. It's been over 40 years since this drastic change, meaning for under 40 year-old workers the supply is much lower now. It's the young that can work those 300-hour months far away from their families. I'd heard about businesses moving their manufacturing facilities, at least, to Bangladesh, Vietnam, Indonesia, etc., but per my source this out-sourcing is big now.

The Chinese government has been subsidizing companies that export goods in a more direct way than what I've reported regarding their pegging the Yuan to the Dollar. My source says that they've been basically reimbursing most of other country's import tariffs. I really wondered know why they can't let the economy just operate self-sufficiently, with Chinese producing goods for their own consumption. There are still hundreds of millions of poor farmers, though, that still can't buy much on $1,000 a year or some such money. Additionally, as I have written (somewhere on this blog, I think) that much of the middle-class in China is still not living nearly as large as the lower middle-class here. They do travel around the world, as we noted, and they send kids to America to go to the Universities, but still a million here and a few million others there, are a still a small fraction. Even then, Chinese people scrimp and save to do these things.

Inflation has been significant in China, as we noted in A porcine crisis in China. Inflation is our biggest export, since the Chinese Government keeps the exchange rate between the Dollar and the Yuan fairly constant. If the Dollar become worth less, than the Yuan will follow.

Besides all these real economic problems, most of the Chinese people, at least the young ones, have let their government convince them that going cashless for convenience is the way to go. The payments via smart-phone are growing rapidly, and many establishments don't take cash or even cards for payment. This is the Chinese expressway to Revelation 13:16.

Peak Stupidity has already had a 2-Part series of posts, "Dashed high-hopes for China" (Part 1 and Part 2) in which we discussed our disappointment about any chance of China becoming a new beacon of freedom in the world. It includes more examples and some personal anecdotes to elaborate on this portion of the troubles in Big China.

We will admit that, yes, at least the Chinese government cares enough about Chinamen to not be actively trying to replace them. That's not enough though. If the reader can suspend his disbelief here, per my source, the Chinese Central Government is more nefarious than the Feral Gov. here. There is just so much that they get their dirty hands into, screwing up business and the lives of the people. Yeah, the people involved like the Chinese people, but they like themselves more.

Marks of the Beast, floods, inflation, loss of livelihood, totalitarian epidemic responses, shoot, what else is coming to the Middle Kingdom? This is why I wrote in that Independence Day post, that we're still better off here, for now. In America, patriots may not all know it, but we are still in a lot better position to fight back than the Chinese population is. We need to give it a go.***

* Just for fun, we have another post called Little joke in Big China... I think it was the Strayins!

** In rural areas the policy was that parents could have 2 kids if the 1st was a girl. In rural areas, many Chinese do whatever TF they want anyway. They don't have much to lose, still, many of them.

Also, the policy was changed to 2-children in '15, but has been completely rescinded in some big cities.

MBlanc46
PS America is finished. A walking dead man. The American century is over. If the 21st century is anyone’s century, it will be the Chinese century. But it might not be anyone’s century. However, I do think that the Chinese are going to give it a real shot.
Moderator
PS: Thanks for the correction, Dtbb. Nothing to do with Hong Kong, nor Bruce Lee, nor Jackie Chan. I wonder what movie trailer I'm remembering then.