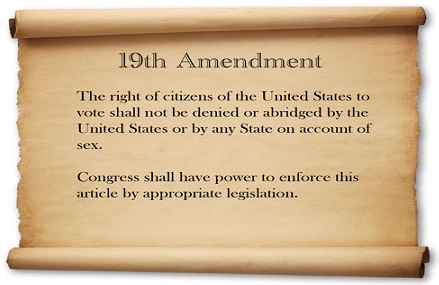 It's been a month and a half since Peak Stupidity's last Morning Constitutional, so we've got a lot to get out of our system here. For today's post seeking the peak of the series of 27 US Constitutional Amendments, there won't need to be much legal discussion other than our stating that here was yet another gift of power from the States to the Federal government. The rest will be purely opinion, opinion that this site has steeped in since we started our Feminism Topic Key in the 3rd month of our blog.

Yes, you can read it above and weep, or here in blockquotes, if there is some problem reading the graphic:

Congress shall have power to enforce this article by appropriate legislation.

Peak Stupidity doesn't usually have great timing with some of our "it was a hundred years ago today, when Socialists took the freedom away" post (sorry for the terrible Sergeant Pepper reference!). However, in this case, let's just reflect on the fact that it was just over a year and a month ago last century that Amendment XIX was proposed* by Congress. In this case, as with possibly all of the Amendments, it was via using method 1 for the proposal and method 1 for ratification**. That ratification occurred on August 18th of 1920. Should we post something that day in remembrance? It would not likely be pretty.

To start off with, yes, Amendment XIX was another transfer of power to the Federal government, and another involved with the States' voting process, after Amendment XV. I hadn't mentioned in the A-XV post, but interestingly, these two do not specify that this voting law is only for Federal elections either. This makes it a power giveaway in two ways, getting into how State operations work along with the Federal election process. I don't like either one.

After all, looking back at it on Wiki, there were a number of States that had allowed women to vote well back before the proposal of Amendment XIX. The sordid history of this idea goes way back before 1920, at least 70 years for serious efforts, protests, and the like by the kind of women that appear on those dollar coins you occasionally get out of the Coke machine and are often confused with Chuckie Cheese money. This history is in that Wiki link just above, but this post can't cover all this stuff. (It's supposed to end up a polemic, dammit!)

Well, I LUV LUV LUV maps, after all, and this map from the Wiki link shows us which States were really conservative and which were not, in the year 1920, at least on this critical issue: 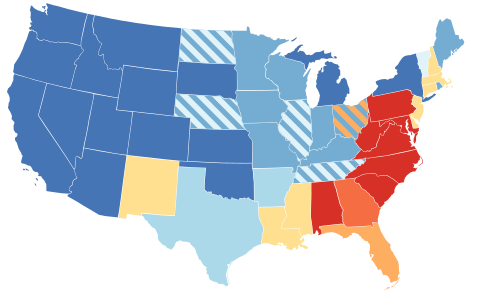 Because the legend didn't come with the picture, you may look on the Wiki page, but let me add it here:

The Deep South was by far the most conservative, which one would expect, but the Eastern Seaboard in general had the lid on things, other than, of course, New York. Look at the West though. Was it the pioneer spirit and pioneer women being not so much a problem? I don't know, but it'd be a good subject for a Steve Sailor or Audacious Epigone post. (For the latter, we can't promise a bar graph!)

The geographic differences aside, suffice it to say that this issue could have been left up to the States. That's not because "it was going to happen anyway", but because they seemed to have a handle on what they wanted, and well, if voting was that big a deal to you as a women, you could move West, young spinster, or, yeah, New York. From what I'll write more about, I really can't see that this would be a big factor in where an American woman would have wanted to live and any big deal in their lives. It was those agitators that take up the large history section of the Wiki post that spend a century ramming this stuff through, and ramming America in the ass in the process.

As with a lot of history, some small beginnings happened way before anyone though very much about it, and the "Interactive" Constitution Center comes through with a humorous bit on its Interpretation page:

Alas, New Jersey’s early experiment with women’s suffrage didn’t last. After a few hotly contested elections in which rampant voter fraud was alleged, there were calls to tighten voter qualifications. In 1807, amid allegations that men dressed as women had been going to the polls to cast a second ballot, the right of women to vote in New Jersey was withdrawn. If there was much opposition to this act of disfranchisement, history has failed to record it.

It sounds like a scene out of Monty Python!

Per the reasonably unbiased C-center interpretation - till the last 2 paragraphs, that is - the continual efforts for women's voting rights were put on the back burner during the lead-up to the War Between the States, the war itself, and then into Reconstruction. By the early 1870s, things cranked up again, in a long push toward 1919.

As for ratification, it was no easy win. (That doesn't mean they would not have tried, tried again, as it always goes now - there is usually no compromising or settlement. When the left/authoritarians push for something, they are never accepting of a no vote.) Tennessee was the last State to ratify Amendment XIX. From the same page:

Ratification was nevertheless hard fought. Tennessee was the state that put the Amendment over the top in a 49-47 nail-biter vote in the Tennessee House of Representatives. The decisive vote was cast by 24-year­ old Harry Burn, who had intended to vote against, until he received his mother’s letter urging him to “be a good boy” and vote for ratification.

That's how it ends, not with a bang, but with some young kid listening to his mother. Too bad his mother was not named Ann Coulter, as things may have turned out differently for us. More to explain that one, and our whole polemic, for that matter, are going to have to appear on a Part 2 post, Monday morning. It's something to look forward to, right?

* The Constitution Center site drops the ball on this with the use of "passed" instead of "proposed". I understand that they mean that the proposed Amendment was passed, as in voted "yea" on, by the required 2/3 of both Houses of Congress. It would be confusing to the laymen, those not Constitutional Scholars such as a couple of people left in the country, including Øb☭ma, supposedly.

** See, I don't think we've ever gone over this, so straight from the document itself (Article V), here are the rules for creating Amendments. The language is not of the style we use today, but one can make out easily that there are 2 processes available for proposal of Amendments and 2 for ratification:

The Congress, whenever two thirds of both Houses shall deem it necessary, shall propose Amendments to this Constitution, or, on the Application of the Legislatures of two thirds of the several States, shall call a Convention for proposing Amendments, which, in either Case, shall be valid to all Intents and Purposes, as Part of this Constitution, when ratified by the Legislatures of three fourths of the several States, or by Conventions in three fourths thereof, as the one or the other Mode of Ratification may be proposed by the Congress; Provided that no Amendment which may be made prior to the Year One thousand eight hundred and eight shall in any Manner affect the first and fourth Clauses in the Ninth Section of the first Article; and that no State, without its Consent, shall be deprived of its equal Suffrage in the Senate.

Were any of the Amendments proposed and/or ratified with the alternate methods? I don't think so. Holding conventions on the Constitution could have been dangerous things, and Americans are only prone to convene for sportsball and Trump rallies so far.

Moderator
PS: Thank you, Mr. Blanc, for a comment, that if you don't mind, I can insert into my opinion post to come on this, wherever it fits in best.

I was very close to a feminist-type girl way back. She was not really politically active, mind you, but she put all these ideas into open-minded me, and pussy talks, and one pays very close attention at that age. So,yeah, I didn't argue too much, but partly because I just didn't have any wisdom back then.

They'll be much more to say about this in Part 2 - it's iSteve commenter territory too.
MBlanc46
PS My maternal grandmother was a suffragette and my mother was a proto-feminist, so I grew up with the idea that “women’s rights” were a good and an important thing. The women of my age cohort were the “second wave” feminists, or their younger sisters. These were the women that I knew and liked and lusted after, and it wouldn’t have been politic to gainsay them too strenuously, even had I been a mind to do so. But, although I was and am something of a class warrior, I could never quite buy the idea that Happy Rockefeller was the oppressed and I was the oppressor. And the more I dealt with and observed women, the more I noticed what we then called their fickleness and now refer to as their hypergamy. Slowly, I freed myself from the love ideology and came to believe that you have to analyze male-female relations as you do any other human relations: in terms of competing interests. And if interest competition is going to have positive outcomes—i.e., civilization—the interests of both parties are going to have to be at least partially satisfied. Giving women the vote—after men invented antibiotics, thereby allowing women to become a majority of the population—put them in a position to see that men’s interests were not satisfied. This has not ended well for men. It remains to be seen whether it will end well for women.