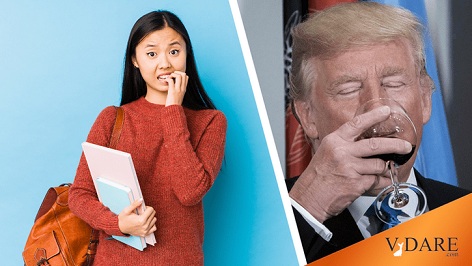 (This one was from the last weeks's article by Federale, with the original good news.)


Yes, you heard it here first, readers, President Trump's promises are not to be trusted. This goes for almost every single one of them, even small pieces of immigration policy, as per the link to the story about yet another type of visa that leads to non-immigration visitor "students" staying here for good.

I'd really thought Peak Stupidity had already posted something about this, but I it must have been only in a blog comment on unz.com where I specifically mentioned the latest encouraging little tidbit, as reported by Federale at VDare, Trump To Expel 3000 Chinese Graduate Students For Espionage—Why Not ALL Chinese Students?. Yeah, the excellent idea was to at least use the Kung Flu re-Panic as an excuse to cut down on the Chinese student visa numbers. I mean, if you're going to be learning remotely on Zoom, you can learn just as well from China. What's the point in even being here, right?*

Though Federale noted that the anti-American Kushner crowd was already trying to soften this ICE policy, per:

Sadly, it appears that Jared Kushner and openly anti-Trump university lobbyists are working behind the scenes to soften the blow, instead of expelling all Red Chinese students and prohibiting all future students from Red China, only a select few will get the chop.

... he was still ebullient about it, after noting the original NY Times article (written by one Ed Wong - no conflict of interest there! - and a Julian Barnes) admits this is all about the Benjamins for the U's:

American universities are expected to push back against the administration’s move. While international educational exchange is prized for its intellectual value, many schools also rely on full tuition payments from foreign students to help cover costs, especially the large group of students from China.

But aside from the direct national security threat of Red Chinese spies, the more damaging threat is the American jobs Chinese students steal through Optional Practical Training, Curricular Practical Training, mass numbers of H-1B NIVs, employment visa fraud, and illegal employment, not to mention those who stay illegally after graduation.

More than 3,000 Red Chinese need to be expelled, all 360,000 should be expelled. Imagine the fury of the pointy headed intellectualoids in the universities who all hate President Trump! Just for political reasons alone the President should order all Red Chinese deported. This will also cause a fury in Red China, undermining the implicit agreement between the Chinese and their Red government; the government gives the population prosperity and a chance to study in America in exchange for the tyranny and corruption, but if the Reds can’t deliver prosperity and a ticket to America, things get hot. But the best part is the financial impact on leftist universities losing hundreds of millions of dollars in tuition.

There's that ebullience for ya'. Those VDare guys and gals are nothing if not hopeful.

I was not at all very hopeful. In an unz comment 3 or so days back, I predicted with great confidence that President Trump would renege on this small, but worthwhile, step in immigration enforcement. Now, I know what you're thinking. How can Peak Stupidity have this much insight? How did we know that President Trump would change his mind within a week? Just to put to to rest the hope that this Peak Stupidity blogger is the 2nd coming of Nostradumbass, let me put it this way:

President Trump is full of shit most of the time! That doesn't even mean that he doesn't WANT to put this small ICE policy into effect. It means that he said that he would go this without having an idea of how you get things done as the damn head of the Executive Branch of the US Government! The employees of ICE work for Donald Trump, period, judges, rulings, and BS from Congress notwithstanding. I'm gonna elaborate on this in a 2nd post, but for now, let me point you to the let-down that was amazingly prognosticated by this blogger.

I just understand that President Trump's word is worth absolutely nothing. A man is as good as his word, so what does this say about Donald Trump?

VDare writer James Kirkpatrick, in a post about another subject, (OK, no more Polish jokes out of this guy - time for American jokes out of the Poles.), notes in passing:

Depressingly, in the face of Establishment opposition, the Trump Administration has just backed down from a policy that would have banned foreign students from receiving visas [A link follows to an article that I just don't even feel like reading. WTF is new?]

There you go. Not a week later, the weak non-leader Trump has let us down again, even on just another small piece of what could have been encouraging policy.

No, it didn't have to go this way. Again, that's another rant for another post.


* We know the real reasons, a chance to live in a better environment, get the kids immersed in English in one of the good schools (you know, with the white and other Asian kids), and work on staying permanently.

MBlanc46
PS Yeah, they hate him. They hate him so much that it’s driven them completely round the twist. And when he’s gone (which looks as if it’s going to be 20 JAN), that hatred will be turned against us. Whether you think that’s a good thing depends on whether you want the civil war to begin now, or not. My concern is that we’re not ready for the war yet.
Moderator
PS: That (he's not Joe Biden) is one, Mr. Blanc, and the 2nd is that he's pissing off all the people that I'd want to piss off. (Only thing is, policy-wise, they really have nothing to be pissed off about.)
MBlanc46
PS This is even worse than him thinking about doing something about something, considering doing something about something, and then doing nothing about anything. This time, he almost does something, then changes his mind. We can blame it all on Kushner, but Trump doesn’t have to listen to Kushner. He wants to listen to Kushner. Somewhere (here, Sailer’s comments?) I saw the expression “useless blowhard” used to describe Trump. All the evidence supports that description, and none of it disconfirms it. The one positive thing that you can say about Donald Trump is that he’s not Joe Biden. Is that enough?
Adam Smith
PS: Good afternoon Mr. Moderator...

☮
Robert
PS: Almost my entire adult life, I have thought, 'Surely, the next one (President) can hardly be any worse.' And yet they somehow manage.

Not that Trump is definitely worse than O'Bama was, but still.

He would whisper such sweet nothings in my ear, and they turned to really be nothings.