It's been just about another week since the last COVID stupidity, at least anything new for me and worth writing a post about.


Stick 'em up! One million dollars in un-contaminated bills. Put 'em in the sack, and throw in some un-used wipes, will ya? Oh, all of you, back on your stickers, or I'll sneeze, I swear I will! 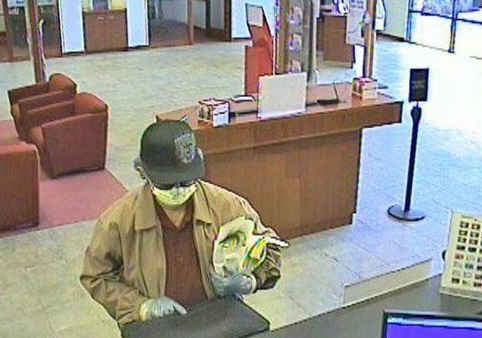 We've been to the bank a number of times since the Kung Flu Panic-fest started. They didn't want anyone going into the actual bank building for a spell. I come from a family that never adopted the drive-through lifestyle, so, if you can believe this, it was a new thing to put the paperwork into the canister and watch the air blow the thing over to the tellers and see it come back with money and receipts. Kids LUV it!

During the Panic-Fest intermission, or break between Seasons 1 and 2, the banks opened up. One was supposed to wear a mask and stay apart from others (uhh, I can't see how much she's counting out from 6 ft away, so, just sayin', "please... don't ... stand ... so ... far from me.") They also controlled how many people could get in at a time. That was especially applicable to any bank robbers, cause, you know how they can be sometimes.

The face mask wearing has been enforced with a Stalinist intensity since Season 2, "Return of the Panic", started. I was putting one on as I entered the main lobby, and the lady was already on my case. "Where's the little podium thingy?" (where you get the slips of paper and use one of the chained-down pens - they must be very dear) I asked. Gone for the duration or something, she told me, due to, what now? Therefore, not only are you supposed to stay apart, keeping people out once a crowd forms, but the process is slower since anyone waiting can't do anything till he's at the teller window. Stupid, it seems, but then this virus... I mean it's so deadly that you don't even know you've got it until you get your test results back.

I recognized the teller girl, even with her nice designer face mask on. It was all friendly enough, as usual, and I tried to keep in good humor. I did have the thought, "hey, how are they supposed to ID robbers nowadays?" The girl did ask me to lower my mask as I showed her my driver's license to take out money, along with the other transactions. At that point we were 2 1/2 feet away, so ... OK, I'm just sayin'... That's even more silly, as it was just procedure and not necessary at all, since she DID know me.

I guess she knew me pretty well to have not hit some red button behind the counter (or do they use an app now) when I asked "what are you going to do about bank robbers now that we all are wearing these masks?" By "we" I didn't mean "we bank robbers", but more, "we people forced to wear these stupid masks." That COULD be taken the wrong way, but then, again, she knows me and had ID'd me, after all.

It's very hard to have a really original idea, it seems, as there is nothing new under the sun. During the H1N1 flu epidemic in 2009, there was a bank robber in San Diego - that's the gentleman in our photo above - who made a special effort to not spread the swine flu during his un-surprisingly successful heist. Per this Baltimore Sun article,

The FBI and San Diego police are asking for the public's help to identify a man who robbed four bank tellers Friday while wearing a surgical mask with the letters and numbers "H1N1," the swine-flu virus designator.

Now that's some good citizenship, warning your robbees about a very contagious disease, even when very busy with a job. Oh, the article was from 2009, so I'm guessing the FBI and San Diego PD did not get the help they needed.*

I'm telling you, between the Anarcho-Tyranny that used to only let antifa Commies wear masks but put the hammer down on anyone on in the right, and now robbery opportunities, this mandatory face mask business is a real game changer. Things will be different even when it's voluntary, so long as the Panic-Fest is still on, and masks are seen as normal.

* I couldn't find anything on-line saying the case was solved. However, I did learn just a little bit about the Geezer Bandit who performed a string of many bank robberies around southern California. Man, I tell you, even in retirement, Californians really stay active and don't just sit around collecting their Social Security checks!

My opinion on voting lies somewhere on the
a) Don't vote it only encourages them/democracy is the theory that the voters know what they want and deserve to get it good and hard, and
b) if voting could change anything, they would make it illegal.

That said, the second person I ever voted for in my life, was the Orange Man for the 'entertainment value'. I guess I got my moneys worth.

I really wish I could vote against, rather than for. I suspect that the candidate with minus 3, would beat the one with minus 5.

P.S. Although I despise their politics, Eugene Debbs, William Jennings Bryan, or even Huey Long would be Men that I could vote for. We are in a sad time.

P.P.S. Masks worn on the chin are becoming rather common around here, so perhaps there is some hope. Although MAGA masks still strike me as strange.

Ganderson
PS Mr Fed I mostly agree with you, but I feel Trump will continue to disappoint. I guess Slow Joe is worse, but I fear the country will burn if the Donald is reelected. Not a reason to vote for the retard but... Anyway I live in Mass, so my vote doesn’t count.
Federalist
PS-

Trump has been pretty much a complete disappointment to me. I have almost no faith in our whole political system. But I very much want Trump to be reelected. The joy I would take in seeing the Left's shock and outrage would be downright sinful.
Ganderson
PS And one more thing- yesterday a moonbat resident of my moonbat town, a nice lady with many unexamined assumptions, told me these lockdowns need to continue so we can be sure to get Trump out of office. I’m pretty much in your corner, now , Mr. Moderator, vis-a-vis The Bad Orange Man, The only thing good about him is the enemies he has.
Ganderson
PS. Good Morning and happy Friday, all. I posted this a couple places- I hope, Mr. Moderator, that its ok to post here as well:

Book it- very few American colleges and universities will open in person this fall. Most have announced some kind of hybrid opening- all being currently re-evaluated. I’m well-connected to a pretty well branded northeastern liberal arts college- I’ll bet my pension it will not open with students on campus, probably for the entirety of 20-21. The Panickers are in complete control- not just the administrations of the colleges, but state and local governments, too. That may be different in Redder states, but look how people like Greg Abbott are folding like Dick Contino’s accordion. NO dissenting, anti-panic voices are uttered in the high level conversations that I overhear. There may be some anti-panickers in these administrations, but, knowing they’re severely outnumbered has a dampening effect on people’s willingness to speak. And, not to mention that the innumeracy of these highly educated people is stunning.

Here’s my prediction of what’s coming:

The ridiculous baseball season, the hockey and basketball bubbles will be either called off or never started due to “increases in cases”.

No pro, college, high school, or youth sports for the ENTIRE school year.

Most school districts will operate remotely for the entire year- there may be some sensible states out there that open, but I’m positive MA will not be among them.

Mask wearing mandates will continue, no end in sight.

Testing will be off the charts, as will “cases”, deaths will continue to drop, at least until next flu season. The press will continue its “ we’re all gonna die unless...” mantra. Also, it would seem that Bad Orange Man is drifting toward the panic side.

Many small colleges will not make it through the school year. I may have the timeline on this a bit too short, but... Scott Galloway has divided higher ed into 4 categories, with the bottom being “toast”. (I quote from memory). Sad, really, even though I don’t care much for the education that goes on there, many of these places, including the two midwestern schools my younger boys went to, have been around for more than 150 years, and have people who love them. What’s better than going to an Amherst-Williams, or Ohio Wesleyan- Denison lax game on a beautiful spring day? Williams and Amherst will survive, not so sure about Denison and OWU.
Unfortunately Galloway’s a panicker.

Some of this might go away If Slow Joe gets elected, but for those of us (Yeah, I know, OK boomer) who grew up in perhaps the best times ever- we need to realize those times are over.
Adam Smith
PS: Good morning Mr. Moderator...

One of my customers is a retired gentleman who used to be the president of the local bank. I was at his house the other day to help him with his computer when he and I got to talking about panicfest/riotfest. (We had not seen each other since the party started) He said that before he retired if anyone would enter the lobby of the bank with a face mask, or motorcycle helmet, bandana etc. that they would all be on high alert,with someones hand hovering near the panic button. Only a bank robber would wear a face covering at the bank. Now no one is allowed in without their panicmask. Clown world is so much fun.