What a heartwarming story, but (luckily) not my story. 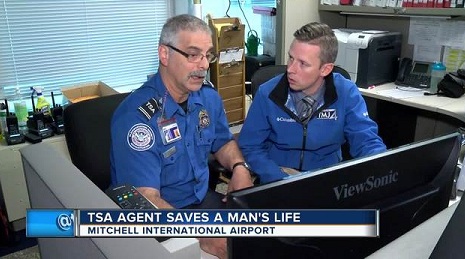 From our recent family trip comes a story of a GOOD TSA guy. Can you imagine? Try to get in your head "good" and "TSA" together. OK, I'm just hearing the hilarious Good Samaritan skit from this recent post in my head. It's probably hard for the Peak Stupidity reader to understand that I'm not being sarcastic this time. Don't worry, more complaints about this whole government organization devoted to illegal search and seizure is coming ... tomorrow or on the weekend.

I try to direct my anger against the operation rather than the people, for whatever the indignity may be. In the case of the TSA, though I abhor the whole point of this agency and the process, I've tried to be civil lately with the people. Yeah, I know, "they just work there". I would really like to give this shout-out to the TSA gentleman with his location, just in case anyone reads it who might let him know, but we do try to keep a low profile here. Secondly, it would likely get him in trouble!

I'd lost something that would have allowed my normal quick pass through this checkpoint into the airport. At this one location, at a pretty big airport, there was nobody but our family in the line. The guy was pretty lenient about what I was taking through there, as we were very close to missing the flight (the search for my item was part of the problem, but the delay getting to the airport is what I blame for my losing of the item to begin with). Maybe it was because it was slow, but I have never met such a reasonable and helpful guy in the TSA in a long while.

The fact that he was reasonable meant that he was using common sense rather than enforcing random stupidity. That is part of what could get the guy in trouble. It's like that nowadays, in all government and other big organizations. The stupidity from on high must be enforced. Anyone being reasonable is taking a risk of getting in trouble, as one can't go wrong nowadays by enforcing "zero tolerance".

I thought back to 25 years ago, when the security guy was just someone hired by the airport authority. This was at LAX, mind you, and the guy said "hey, that pocket knife is probably a little too big. Do you mind putting it in your checked luggage?" The situation was so relaxed and non-confrontational that I could have probably argued him into letting me keep it on me. I did bring it back downstairs, and the only checked item I had was a rifle. It was already in a room behind the counter, so I was all, "hey, can you put this knife with my gun?" "What? Can't hear you." I had to shout "take this knife and put it in the box with my gun." Yeah, I'd be face down on the floor if this happened in this century.

So, thank you Mr. TSA man! You saved our trip from going haywire. Of course, if there were no TSA in the first place ....

PS: The reader may be long sick of these posts about the TSA. If you've read this far though, let me say this: If you don't travel on the airlines much, I understand that it's out-of-sight/out-of-mind to you. However, even if you don't travel, you've gotta know this Police State stuff is slowly building up. (Do you remember long ago when DUI checkpoints were actually debated based on Constitutionality?) This won't be just an airline travel thing in the long run. I thought they'd be doing the same at the train stations, but then, with Amtrak, who cares? A train on the Chicago-San Francisco line could get blown up, and the families on the other end would not know for a couple of days that something was amiss, the way that they keep to a schedule.

MBlanc46
PS I’m not married to the idea that it has to be the state vetting airline passengers, but I’m glad someone is doing it. It would be wonderful if we still lived in a world where it wasn’t necessary, but we don’t. As far as firearms are concerned, I sure hope that I’m never on a flight where a gunfight breaks out. Regarding the movie, I’m sure it’s a movie from the 1950s, probably black and white, and the airplanes had propellers.
Moderator
PS: That's just my humble opinion, Mr.Blanc, but I did want to reply to the other interesting things in your commetn:

Are you sure you don't mean "Airport", the first movie? That was from '70 or '71 though. I rented all 4 of the series (the original, "Airport '75, '77, and '79 and watched them on a 3-day weekend, as they came for the same price. The first one was fairly realistic, but they got stupider and stupider. BTW, the character actor George Kennedy must have told the director or producer that he would not be in any more unless he was a star, as he was the Captain of the Concorde on the last one.

I think I remember those kiosks still around in the 1980's but I'm not positive.

Thanks for writing in.
Moderator
PS: Mr. Blanc, I've got 2 beefs with it. They both have to do with this all being run by government now. It used to be the airports and the airlines responsible. Now, especially, as there are very few commercial airline crashes in the US, one deal like a bomb in the plane (that blows up) can put even the biggest one out of business. They care more than anyone but the passengers themselves, so they can make an actual reasonable effort, vetting the people they are worried about.

With government running the show, all the stupidity comes into play (the idiotic reactive 3 oz. liquid/gels rule based on just one incident comes to mind, but here are lots). Profiling for the people to worry about can't be allowed, so grannies and toddlers are searched like everyone else.

The good people (99.99% of passengers) should not be disarmed. We'd have never even been writing about this. From my post:

"Wouldn't this country, and the whole world possibly, be so much different now, if the following simple thing happened 16 years ago today: What if the airport-based security guys at that time were NOT disarming passengers? What if only 2-3 passengers on each of those airliners had been armed (very likely were they living per US Constitution Amendment II)? Can you imagine how proud Americans would have felt and still would, had the planes been defended through quick dispatch of the RWB's (Ragheads With Boxcutters)? Not only that, but the rest of the world would be mostly envious, some angry, that this was a country that could not be messed with as there was still "a rifle behind every blade of grass".
MBlanc46
PS I must admit to being of two minds about this. On the one hand, I remember the days when you showed up at the airport half an hour or so before your flight, checked your bag, got your boarding pass, meandered to the gate, and boarded. No fuss, no muss. On the other hand, it is clear that there are a lot of completely insane people and a lot of completely evil people and a lot of completely insane evil people in the world, and it occurs to me that maybe it’s not unreasonable to have someone vetting who gets to board an airplane. I recall that in the 1950s there was a movie about a guy who puts a bomb in his wife’s luggage so he can get insurance. (There used to be kiosks in airports where you could get flight insurance.) But that was just a movie. That was 1950s, early 1960s, when we were still a high trust society. Now we’re a low trust society. We need ever more cop types to keep the baddies at bay. Of course, who guards the guards? There’s no real answer to that problem.