This post could also be called "Elevator Etiquette in the age of the Kung Flu", but we've already got a name for this series, so ... continuing from Part 9... 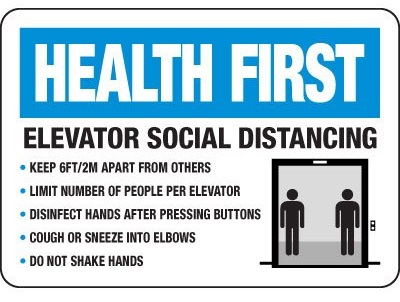 We can barely go a week here at Peak Stupidity without running into some Kung Flu stupidity that results in a blog post. After I thought about this one, I talked to a guy about his mask, and got so infuriated at his answer ... see, now that's another post.

In the elevators of hotels now there are signs of various sorts to help us prevent ourselves from spreading this Black Plague 2.0 that has our matriarchal society in hysterics. The signs are on the doors on all floors, and the stickers are on the elevator floors too.

Stay 6 ft. apart, it told me. Yeah, but the elevator was only about 5 ft across. OK, with a 4 ft. depth though, lets plug into Pythagorus' theory. Yeah, in my head it works out, but then do our mouths have to be 6 ft. apart? I think these stickers need to be more specific, so let's get the contagion engineers on the blower, get specs for these new stickers ... 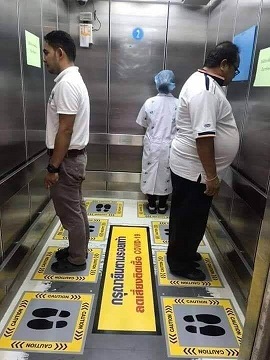 I wasn't wearing a mask at all, as I went downstairs to work out. I didn't expect anyone else to get on, but a 55-60 y/o guy with a face mask on got on at a lower floor. He had nothing to say. I guess that's the normal elevator etiquette, where you look down or up. I gathered that it wasn't the normal elevator etiquette for the masked man to face the corner though. I'd never seen this one before. He really was worried shitless.

Now, that is his business after all, and maybe he really does have something to worry about. I could have put the balled-up mask in my pocket on, but I was just disgusted by the whole scene. Or, that guy could have noticed me in there first, and if he was so concerned, taken the stairs down to get a little bit of exercise - he looked able enough.

After that Precor 842i bike machine kicked my ass, I was still breathing a little heavy*, so breathing in my own breath and snot off a mask on the way up was out of the question. Luckily, it was just me. We need to sort ourselves out into panickers and non-panickers. The masks or lack thereof, ought to be the "flag", as with shirts and skins in tag football. Too bad there are "emergency" orders that interfere with this arrangement.


Some are very comfortable with the new normal. They don't want to be near, or talk to, the likes of me anyway. 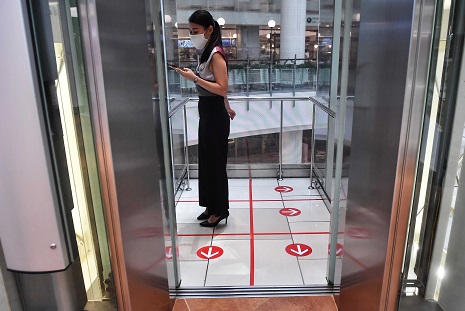 Oh, I almost forgot. The guy on the elevator could see that I'd already pressed the button for floor 1, the lobby. It was lit up, and hell, where would I be going anyway? Yet, he did that thing where you press the button anyway, even though it was lit up. That is BAD elevator etiquette even in normal times, as, well, you're not going to speed it up, and it's as if to tell the other riders they didn't do it right. It just seems stupid. In this Summer of the re-Panic though, it was even worse, as the guy used the tip of his finger, as in normal times.

Doesn't he know that these Kung Flu germies can cling onto those elevator buttons like the last Vietnamese guy off the roof of the US Embassy in Saigon clung to the Huey skids in 1975? You use your knuckles now, you knuckleheads. Knuckles are the new fingertips. This is all great for burglars and bank robbers, between the masks, and now, look Mom detectives, no fingerprints!

* Yeah, I did spend extra time wiping off the machine. I was just glad I didn't have to sneak in - the key card doesn't always work.

Adam Smith
PS: "It's either they don't mind, or they've not thought about it."

I'm sure some don't mind and some are outright panickers, but I think most people would just like to avoid conflict while getting through the day without hassle. I agree wholeheartedly with Mr. MBlanc, people (hopefully most) are taking the path of least resistance. (And who can blame them.)

Many people simply do not have the time, energy or intellect to think about too many of these things in detail. They are busy trying to keep the roof over their heads, feeding the family, keeping the boss at the bullshit job content, keeping the car payments made and the repairs handled, keeping the bills paid and getting the kids to and from soccer practice and where ever else they need to go. By the end of the day they are too tired to have serious thoughts, especially if they deviate from the carefully crafted narrative. They just want to sip a couple beers while they watch sportsball or nascar before they have to do it all over again.

These people are arguably a majority and they do not have the energy to fight back against mask mandates or vaccine mandates other stupidity. They don't have the time to run the numbers, or spend hours reading about how the PCR test actually works and how similar so many of the different coronaviruses are genetically. Even if they do mind the new normal, they are so isolated, atomized and unorganized that they likely see no alternative than to just go along.

People have been so conditioned for obedience to "authority" that most people will do exactly as they are told when told to do so by people perceived to be in positions of “authority” (Stanley Milgram) and most people do not have the courage to believe their own eyes if it means deviating from the collective opinion of strangers or peers (Solomon Asch). On top of that the dominant religion teaches that suffering is a virtue that will be rewarded in the afterlife. (I feel these are some important obstacles to overcome if we are to defeat the new normals and their wicked agenda.)

"It's not just the hysterical panickers that piss me off now, but those who just don't seem to mind (from what they say) that they may be wearing masks for years."

I feel the same way. It pisses me off too. I think too many people are cowards and fools. It's easy to get mad at these people for enabling the real criminals, but I think it's important to not loose sight of the fact that they too are victims of all this nonsense. Not that we shouldn't fight back against the insanity. We must. It's important. Those of us who see where this is headed bear a heavy burden. One day we can achieve victory in the fight against the new normals and the insanity that are promoting, but not if we too cower in fear and compliance.

It is great to have fellow resistors around, if nothing else for the good conversation and to retain some modicum of sanity. For this I thank you.

I wish I knew the solution to the formidable problems at hand. I feel time is of the essence.

☮
Moderator
PS: Mr. Blanc, from a few of the people I've talked to, yeah, "it's for our safety, so why not?". It's not just the hysterical panickers that piss me off now, but those who just don't seem to mind (from what they say) that they may be wearing masks for years. They don't mind that this will be the new normal, as C.J. Hopkins put it in his column. It's either they don't mind, or they've not thought about it.

I'm still trying to get along, most of the time, but I am very glad to see fellow resistors around.
Moderator
PS: "Please tell me it can't get any worse." I can't lie to my regular commenters. I'm so sorry.
Moderator
PS: Thank you for all the links, Mr. Smith.

A) That Oriental girl can't hide that body with the mask. "Hey, you stand on THIS sticker, I'm on the one behind you. Yeah, that's... the ticket ... which brings up

B) How did I miss the Aerosmith song? Doh!

C) Kudos to Zelden's - people who can read!
MBlanc46
PS I’ve made only three elevator round-trips since the Panic started. The elevator was empty except for me each time. Who else would be on it? The office building I was in was mostly empty. Even the place that I was going was mostly closed, as I learned to my chagrin on my first trip.It’s my assumption that most of the people wearing the masks and following the arrows in the aisles (I’m not very good at that) are doing it simply to take the path of least resistance, as I am. But perhaps I’m wrong about that. Perhaps the majority really are in a panic. If that’s the case, we are well and truly screwed.
Federalist
PS-
Just when I thought the coronapanic couldn't get any stupider. I hadn't seen or heard of the requirement to stand in a certain formation in the elevator.

We must have achieved Peak Stupidity. Please tell me it can't get any worse.
Adam Smith
PS: Good morning Mr. Moderator...

“Elevator Insanity in the age of the KungFluPanicFest”...

Shouldn't your opening graphic say...
“Disinfect Hands Before Pressing Buttons”?
We don't know where their filthy hands have been...

Fortunately the sign does not discourage hugging.
I hug all the women I meet in the elevator...

Hugging is a good way to make new friends!

How about separate nations for panickers and non-panickers?
I think it's time...