Thanks go to illustrious commenter Adam Smith for the picture below, from a tweet, about what medical doctor Sherri Tenpenny (formerly Dr. Sherri Penny, but for Inflation) has called "peak insanity". We beg to differ, but maybe it's a fine line between high stupidity and insanity.


Poor little doggie girlie. It'll be all better soon. Now, you breath too much COVID in my salad, I send it back. 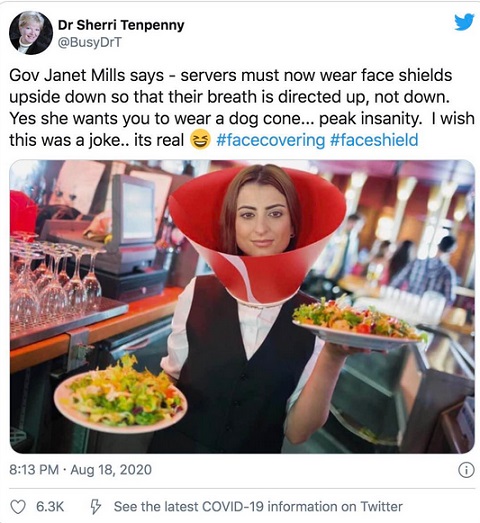 The photo in the tweet is a photoshop, but the order about the wearing of doggie-injury-style inverted lampshade by Maine Governor Janet Mills* is not. It's a sort of cruel and unusual punishment she seems to think she has the power to dole out to those who won't wear face masks. It may be breathing problems with one of those infernal things adding resistance to your air flow, as per one of our commenters**, that is the reason for a waiter or waitress not wanting to wear a mask. It could be as with someone like me, his just not wanting to take part in the stupidity.

Perhaps patrons of a restaurant could decide for themselves whether they are comfortable having food and drinks served by someone without her face diaper on. Then, the boss of the establishment could make his own rule accordingly.

That's not current-era American thinking, however. If you don't want to wear a face mask, the Maine Governor, ruling during this long-trending emergency, says, no, you can't even wear one of those shields (looks like a lightweight welder's shield without the deep tinting). The breath you exhale would go downward, into the food, she says, so you must wear the doggie inverted lampshade.

The last paragraph of The Post Millennial article describing this insanity says:

Maine has only sustained 131 COVID-19 related fatalities to date with the majority in Cumberland County, where the state's most populous city, Portland, resides.

For 131 deaths WITH the Kung Flu, Maine's Governor Mills says waiters and waitresses must be treated like dogs.

I don't know who I would feel sorrier for, the family cat or dog with one of these cones on, or a human in Maine. You wonder if your pet is aware enough to be very sad, thinking "hey, I've got to live with this stupid thing forever. I can't scratch, or eat right. This is gonna suck." He can't understand when you tell him that you'll take if off as soon as that wound heals up. On the other hand, the indignity inherent in a sentient human being having to wear one is very sad in its own way.

* Governor Mills of Maine and Governor Whitmer of Michigan seem to have some totalitarian tendencies in common. Maybe they should get together for some Totalitarian Ted Talks or something.

** I tried to find the comment but couldn't for the life of me. Please chime in again.

I do not have children. If I did, I'd be terrified too...

Fortunately executive orders are not laws.
Unfortunately many people do not know this.

Ganderson, I don't believe that despair is a sin, though it can be harmful to the soul. It is perfectly natural to feel despair because of the brave new insanity much of the world seems to be embracing. I'm still hopeful we can end this bizarre charade and return to something resembling normality. I hope you feel better.

Mr. MBlanc, I too am angry at the evil people who have brought this stupidity upon the world. I hope we can hold them all accountable for the damage they have done. Some crimes really do deserve the death penalty.

Mr. Moderator, it really seems like Mills' diktat regarding the cone of shame is akin to making the unproperlydiapered sit in the corner wearing the dunce cap. It's petty, mean and degrading. It's indicative of the way these tyrants feel about "the people" they are allegedly "serving". Janet Mills should should be put in a straight jacket and taken away to a padded cell where she can't harm anyone. She is clearly insane. Hopefully she doesn't get any "ideas" from Daniel Andrews.

Did anyone notice the lampshade has a coca cola swoosh on it?

Maybe coca cola can supply the cones to the restaurants so Warren Buffet can make a few bucks off this nonsense.

Thanks for the compliment Mr. Moderator...

I hope you all have a wonderful day.

☮
Ganderson
PS Mr. Blanc- I have three boys, all now adults, and I’m terrified about their future.
Moderator
PS: Thanks for the report, Robert. In my NOTW (neck of the woods), the local bank is nutso adamant about the masks.

People in my neighborhood aren't wearing them outside.

At the campus in town, I've seen most young people wearing them outside now! The not-so-young people among them aren't so much.

Target is mask city, as reported already. I have not been to Wally World in a long time - 2 or 3 years. I don't miss it.

I'm glad you didn't get into a tussle at Wally World, Robert.

Robert
PS: Mr. Moderator, Thanks. So it is "only" the governors dictat. I guess that makes it better.

Luckily, the County I am in, the local Sherif's office has said that they will not enforce our Dear Leader's dictats. 'They are not the law, and we enforce the law. It is up to the Health Department to enforce mask wearing.' The local paper carried several letters from people deploring this.

Today's errands: bank --- no masks (tellers wore theirs over the chin); hardware store --- no masks; gas station --- customers, no masks, clerks, masks below noses; Wally world --- almost all masks, but a few customer's masks below noses or on chins. One gentleman (well, he looked like a biker really) was wearing a MAGA mask, and a 'proud member of the basket of deplorables' t-shirt. I almost asked him, 'Well, why are you wearing a face diaper then?' But he was twice my size, and did not look to be in a good mood. Perhaps he was just trying for peace at home.
Moderator
PS: Robert, I think the whole year 2020 is satire, so far.
Moderator
PS: Well, Robert, I don't know if it will come to pass. Waiters and waitresses will resign themselves to wearing the masks probably. The rule is out there though. When I say "rule", I mean Governor's demand, which should be ignored.
Robert
PS: Wait, so this thing (upside down face shields/doggie cones) is real?

I saw that somewhere else, and assumed it was satire. It has to be satire. Right?

MBlanc46
PS “Dueling stupidities”. Cue some Flatt and Scruggs.
MBlanc46
PS Has not Gov. Mills heard that what goes up must come down? And, Ganderson, your sense that things are spinning out of control and that the status quo ante is irretrievable is an accurate one. If I weren’t on the threshold of my 75th year, with no descendants to be concerned about, I, too, would be frightened. Right now I’m just very angry at the evil people who have brought us to this pass.
Moderator
PS: Mr. G., yeah at this point, the idea of just going on with your life and forgetting the madness is probably not helpful. It is hitting us everywhere. School was supposed to be 2 days at the school for the kids, 1 day of on-your-own computer stuff (basically an off-day for us), and 2 more days of remote school. It changed to no days at the school.

I think they didn't have enough parents who weren't too scared of the Kung Flu to choose the 2-day-a-week in school option, but I am not sure of this.

Yeah, I almost forgot about your tyrant up there, Baker. I read all of your comments on the HailtoYou blog on how it was going. I really thought at the beginning of the riots, excuse me, protests, in early May or whenever that this Kung Flu stuff would just be forgotten. Now, we have dueling stupidities to contend with.

Things do look bad, no doubt.
Ganderson
PS. Pretty good horserace going on here in New England between Mills and Baker- which governor will destroy its state faster? Slight edge to Baker at this point, although this latest bit of madness may have pushed Mills into the lead.

Maybe its because I have less to do, and can fixate more on the insanity surrounding me, but I feel as if the world is spinning out of control, with no chance of return to anything resembling normality. I’m actually frightened for the future.

Think about the following:

Local big university going all remote
One local prestige small college going half remote; sealing students in, and keeping the public off of college property
Other prestige small college going all remote.
No college sports anywhere in the area
Mask mandates in all downtown areas
Mask/distancing hotlines set up to allow the general public to report violators
Small retailers forced to close, large retailers open.
Oh, and riots everywhere.
I could go on, and what frightens me is that there is seemingly no end to the; in fact restrictions seem to be increasing.