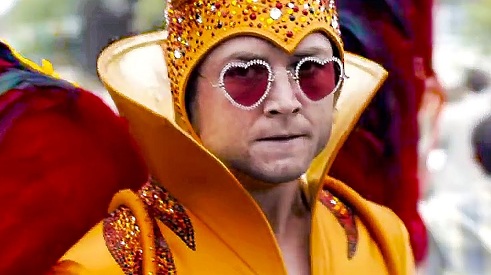 This is the 3rd of the 2 1/2 movie reviews I intended to write way back after our vacation trip flight. I watched the whole movie, if that's important to you, this being a review and all...

Elton John* was not only one of the best pop music artists of all time, but, with his band, he was close to being one of the best rock artists too. The 1970s were a great time for music, well up into Disco put the kibosh on all that around late '77. Thanks a lot, Brothers Gibb!

You would expect anyone who likes Elton John and his band that much to enjoy the movie Rocketman. It just doesn't work that way anymore, I guess. Everyone has to get creative and shit...

That's actually the same way it used to work when there were things called record albums (or tapes, or CD's even). A band like Fleetwood Mac would have 2 or 3 great albums with not a bad song on the one of them. The concerts would sell out (it helped that the price was $9.50 vs, I dunno, $950?), they'd be on the cover of the Rolling Stone, all that, but then they'd have to go and "get creative". "We are tired of that same formula we've been playing..." [It was called great melodies, good musicians, a tight band, you know, that sort of thing.) "... so we're going in a new direction." "OK, well, there are a hundred other great rock bands around, as this is then 1970s, so See Ya!"

This Elton John movie is very recent, from 2019, and I'd even considered taking my son to it at a small theater. The Kung Flu changed the plan there, but, let me tell you, that was just as well. I'll get to this part a little later.

OK, here's the main problem: This movie didn't have to be a documentary, as Linda Ronstadt: The Sound of My Voice. was close to being. That could get boring. Of course, you want the best of his music in there - they had a full 2 hours - so you could have some special narratives of the artist's life, rather than the whole story, with concert footage and such.

No, this album was a freakin' Musical! Wait, you say, of course it's a musical, it's about a musician and you just wrote you wanted to hear the music. No, no, no, this was a musical as in the genre "musicals" (at least the first half was) that included My Fair Lady, Singing in the Rain, West Side Story, The Sound of Music**, Oliver Twist and The Wizard of Oz. I don't like the whole genre. Here's the deal, see, you've got a story going on, but it gets interrupted every 10 minutes by a 3 to 5 minute song. Who does that?! Uhh, the makers of musicals, I guess, but no, I definitely did not expect this movie about Elton John to be a musical in that sense.

The songs that were inserted, as per a musical, were not in order of the story of Elton John either. That alone threw me for a loop. It was the various actors playing the younger Elton John, as a kid, a teenager, whatever, singing or lipsynching the songs. Naaah, that's not what I paid my ticket for. I'd have much rather seen a good musician who looks like Elton John and can sing his songs similarly do it. They can find guys like that.***

Rocketman was a little too much VH1-Behind the Music-like to me. If you can recall, that show documented the lives and music of mostly recently-deceased young artists (drug O.D., helicopter crash, etc.) They had the same formula for each artist or band. After a rocket ride to the Billboard top 10, he (or they) had some bad times with the drugs, with the sex (huh??), and with the rock-and-roll, but he was JUST coming out of it and turning his life around when... cue the ending of Detroit, Rock City. This movie showed all the problems that Elton John had with his life much more than the good times that maybe he's forgotten. Tell me that guy up on stage with the crazy suits and 1,000 pairs of glasses wasn't having a good time out there jumping around the piano! If it was all an act, then, Elton, why didn't you write a Bob-Seger-like number about how bad it sucks to be a famous rock star out on the road?

Lastly, a problem with this movie is the focus of Elton John's being gay for most of 2nd half of the movie. Yes, he was gay, he didn't really mean his lyrics in Grow Some Funk of Your Own, and so on. It was a big deal in his life, though, luckily for the audience of the 1970s, it was just not made into that big a deal****.

There are damn-near sex scenes in this movie. They pretty much are, but for whatever rating it's got, I guess. This is why I'm glad we didn't go to the movie together earlier this year. On the airplane flight, as my son sat next to me watching Angry Birds 2, I had to stop/skip the movie when these scenes were on. It was worrisome, and even without him there, I sure didn't want to see that.

There was plenty of room to tell Elton John's story, along with giving credit to his long-term lyrics-writer Bernie Taupin. There is a bunch of family background stuff, if you want to know that. It's not all bad.

In summary, Rocketman was not an uplifting movie, it did not showcase nearly enough of Elton John's really best music, and the creative format was stupid. I am not a professional movie reviewer, so I ask the readership to excuse the lack of writing about the cinematography, the lighting, and the casting, because I honestly don't give a rat's ass about all that.

This movie could have been much better with all the great music and showmanship it had to work with. If you are a big Elton John fan, maybe you feel like you have to go see Rocketman, but you may be sorry you did.

Here's just a sample of some of the great stuff from Elton John and his band (Davey Johnstone on guitar, Dee Murray on bass, and Nigel Ollson on drums):

* His real name is Reginald Dwight, but we'll stick with his music name in this post.

** While discussing this point, a friend told me that this one, The Sound of Music was better in that the music was the story. I haven't seen it, but my parent's had the album.

*** There's a recent musician-story movie done like this, that I can't pull out of my memory for the life of me.

**** Maybe in the tabloids and all it was a big deal. Everything is a big deal in them. Mr. John, or Reggie Dwight was flamboyant as all hell, but he didn't make his homosexuality a political thing to gain audience, as I think was the deal with The Indigo Girls. Well, it wouldn't have worked. People didn't want to know anymore, so long as he wouldn't "get creative".

Moderator
PS: That is the one, Fast Eddie's! I remember reading about it in one or more of Steve Sailer's reviews. That is a great wild ass guess, thank you very much.

It sounds like it was a good movie from the Sailer reviews, as I recall, but I don't think his opinion on movies jives with mine. Maybe you can tell me, if you've seen it, that is, whether it has lots of the best of Queen music, and whether is has a lot of PC or whatever else to piss me off. (Ha! That's a tall order.)
Fasteddiez
PS: The movie your memory could not revive would not have been the one based On Freddy Mercury and Queen Would it?
Just a wild ass guess.
Moderator
PS: Ha! Liberace. That's better.
Robert
PS: About 50 years ago, my parish was doing some fund raising to restore their organ. (A "theater" rather than a "church" organ, whatever that means; and supposedly "historically important") At any rate, Elton John was supposed to do a concert, but this was rejected. I was just a kid, but I had the impression there were objections to his "life style".

So, Liberace did the concert.