"Do you love me, little surfer girl?" 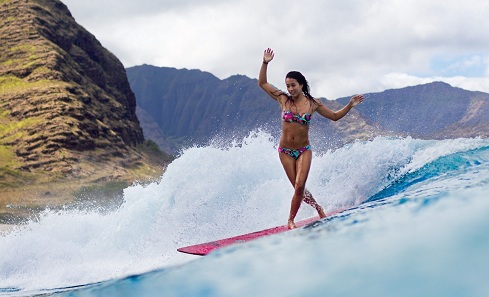 
Well, this Kung Flu stupidity is getting Laugh Out Loud funny. From commenter Adam Smith with the link, the UK Daily Mail* reports to us Female surfer is dragged away by hazmat-wearing officials and arrested on Spanish beach after going in the sea while infected with Covid-19. Save the Whales, from COVID-one-niner!

As lots of us Americans have noted by now, this Kung Flu is not quite the Black Plague 2.0. The young people, especially those in shape like this one shown below, yes, really in shape, the buttocks, thighs, if she'd take off that neoprene... oh, yeah, they really aren't being harmed by this virus in the least. (See the Ron Paul video in this morning's post for some more regarding the college students.) Yet, governments around the world don't want to sound stupid by admitting they've been utterly wrong, so instead they will enforce the laws to the hilt, making them look stupid.

The perky perp, name withheld, known only (to me, anyway) as Little Surfer Girl, was detained and arrested for the crime of DISOBEDIENCE. The police at La Zurriola beach in the northern city of San Sebastian must have told her to come in after that next wave, but that wasn't her wave. You've got to catch YOUR wave, and you're sitting on top of the world. She was told it isn't safe!

"It's really hairy out there, Ma'am. This is COVID's beach." 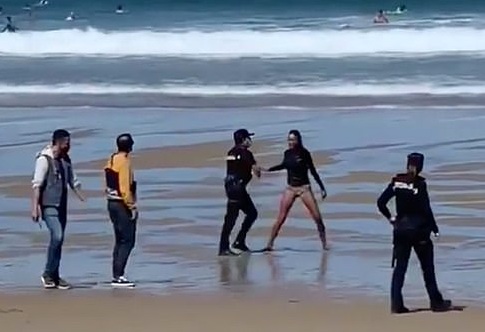 "What do you know about surfin', son, you're from goddamn Salamanca!"

Local reports said the unnamed woman had worked as a lifeguard at San Sebastian's famous La Concha beach this summer and colleagues were the ones who phoned police after spotting her in the water.

Ahaa! Her old friends ratted her out. Perhaps it was about a jilted ex-boyfriend, some sort of Baywatch type drama. Or, were they jealous that they had to stay on the beach while she got to ride some really gnarly waves?

Photos published by a local paper showed two people in hazmat suits escorting her on the sand in a neoprene top and bikini bottom with a face mask on.

Did they mention she had on a neoprene top and a bikini bottom? Yes, they did, twice. Then, there are the pictures.

What a juxtaposition of the world of freedom and the world of Kung Flu Totalitarianism! You couldn't photoshop up an image to make government look so petty, cowardly, and stupid.

"Code RED! Girl with neoprene top and bikini bottom. All units. Put out an APB, Danno, she's left Waikiki. I want a Hazmat team on her, Chinn."
"I'm on it, Stebe!" 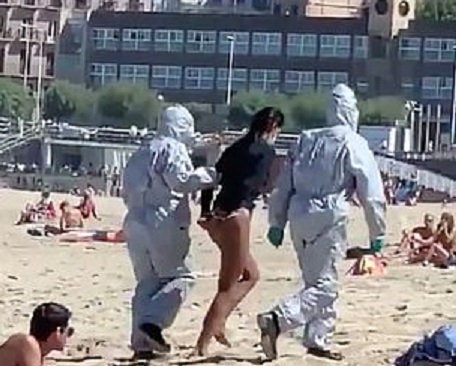 "It's not just a fad, cause it's been going on so long,
(Catch a germ. Catch a germ.)
They said that we'd all be dead 'fore long.
They'll eat their words with a mask and glove,
and watch 'em, they'll detain us with a push and shove.
When you catch a germ, they'll all act like it's the end of the world..."

That great falsetto voice is from Mike Love, a cousin of the 3 Wilson brothers. The Beach Boys were:


* Warning: This article is floating-ad city. Stuff is moving all around the screen, almost as if it's designed to not be able to be read. The page needs a good 10 minutes before it gets out of ADHD mode!

Mr. Moderator, you do not need to photoshop anything to make "government" look petty, cowardly, and stupid.

"Government" is more than capable of doing that without our help. (It might be the only thing at which they truly excel.)

"... these young people are pretty compliant. They are not the "question authority" types of the 60s through 80s by any means."

I too have noticed that young adults and college kids seem to be the most complaint diaperers and the least likely to question "authority". Sure, there is the "everyone is doing it" social pressure thing, but I don't think this alone explains the phenomenon.

I wonder how much of this compliance has to do with young adults growing up in schools with police officers, metal detectors, lockdown drills, drug dogs, active shooter drills and zero tolerance policies essentially conditioning them for obedience, in ways that we were never subjected to.

How many young nonconformists and anti-authoritarians have been "diagnosed" with oppositional defiant disorder or some other "disorder" and chemically lobotomized with antipsychotic drugs ?

College kids and young adults do not remember how the world was before the events of September 11, 2001. It's like they cannot even think about non-compliance with the arbitrary nonsensical edicts.

"Fauci Delenda Est." That should at least be at the bottom of all the re-Panic scenes posts.
Moderator
PS: Mr. Blanc, yes, it's pols throwing their (all-too-hefty) weights around. I meant to bring up your point in my 1st reply to Mr. G. Thank you for the on-the-scene Whole Budget report. Your cashier sounds like the woman at the gym from a number of posts back. Yes, she would feel like she's helping make a better world by wearing a haz-mat suit, and how the heck can you argue against that? I would sure give it a try, though, haha!

(I don't know, maybe she has some serious health problems and is really worried about herself?)

BTW, readers, regarding the Mayor of Amarillo, that was just a hypothetical, with the city name pulled out of my ass. I've driven through on the 40, but never caught anything.
Moderator
PS: Mr. Ganderson, that doesn't mean though, that there may not be some elites who could kinda see this coming after China went hard-core Totalitarian in Wuhan. "Man, if we do this stuff in the name of 'Corona' (remember what we used to call it?), then we can start imposing all sorts of stuff. This will get people used to the idea that we can willy-nilly make them do pretty much anything. Stroke of the pen, hell, words out of the mouth, Law of the Land. We kind of need a compliant population like this going forward ..."

Yeah, it's (probably) not some meetings with minutes and a plan drawn up by committee, but elites were on board with it, and the Lyin' Press was so grateful to have a 1/2-year-long (so far) 24/7 Panic-fest, that they weren't gonna blow it with some denier stats or anything.

Oh, finally, wrt prohibition of alcohol, it was a lost cause getting people to give up drinking altogether. The rebel factor was a thing then, with the moonshiners, speakeasies, and such. We need that sort of thing to come back. Could this mask-Nazism be the impetus?
Moderator
PS: Mr. Ganderson, and a Happy Weekend to you and the others. I've read your reports from Mass. on Mr. Hail's site. Yes, he does have a point that this appears as a religious cult (he says "is", but I'm not sure). I'll get to the causes in a second, but about the people:

Until about a month ago, university students weren't so compliant (there weren't so many around, of course, but still some). As I asked in the Ron Paul post, regarding the ridiculous stats on hospitalizations (ZERO!) vs. cases, would the students even care if they knew that? I would hope they just have heard the wrong information, but these young people are pretty compliant. They are not the "question authority" types of the 60s through 80s by any means. I'd thought that the prettier of the girls would want to show their faces, but I guess if "everybody's doing it", maybe they feel stupid without a mask.

As for the politicians, at the local and State level, I don't think this is all one big plan. These people above all want to cover their asses and not be written up as that bad guy, Mayor of Amarillo, who didn't CARE about the citizens and let them all die by their lonesomes... Secondly, I do think they enjoy the power. One Governor says he's closing the beaches, and the one nearby says, well, we'll close the boat ramps too, can't be too careful (sure, it's ass-covering brinkmanship(?), but also they realize they can just "make it so, #1!"

I'll continue in another comment.
Ganderson
PS Sounds about right. CNN Is reporting that Dr. FrankenFauci is predicting we won’t get back to normal intil the end of 2121.

Fun fact- when I was in the wholesale flower biz, back 40 some years ago, Jewel was one of my customers- I services all the Jewels in Kane and DuPage Counties.
MBlanc46
PS So, I was in the Whole Foods this morning (pauses for hooting, jeering, and raspberrying to quieten down). Mostly, it was no more Stalinist than the other local supermarkets: about the same as Trader Joe’s, a bit more so than Jewel and Mariano’s (which is really just a Kroger). But the clerk at the till I went to (because there was no queue): Middle-aged woman. Not only the mask, but gloves and one of those plastic face shields. It wasn’t required. The other clerks were wearing only masks. This woman was clearly a True Believer. This business is persisting not simply because the pols love throwing their weight around, but because far too many people—mainly women?—love to demonstrate their True Believership. That woman would very likely have worn a hazmat suit had one been available.
Ganderson
PS. Happy Friday everyone! Much of the commentary I read, and I’m sure most of the contributors here are reading the same stuff, focusses on the diktats of people like Tiny Tim Walz, Tall Deval Baker, and the Wicked Witch of the Midwest, but there are many many supposedly ordinary citizens who are all in on Kung Flu panic.
Think about It this way; ( maybe this came to mind because I just finished binging Boardwalk Empire) while Prohibition was supported by many Americans, a huge % of the population opposed it, never really obeyed , the law, and ignored the instructions from above. I know, too that many of the country’s leaders were uninterested in enforcing the Volstead Act.

Corona Panic, though, has way more support among people who should know better, nearly the entire education establishment is pro-panic; and it’s not just cynical power-grabbing, they really believe, and are impervious to any rational argument. I’d include the above named governors- I think they believe they’re doing the right thing. I see no evidence for high levels of intelligence in many of our leaders, but I don’t think it’s just a naked power grab. ( I may be kidding myself, too). Our pal Mr. Hail says Corona Panic is a religious cult, and I think he’s right. That’s how you get what we have; covid violation tip lines, surfers arrested, doors in Australia being broken down and mask scofflaws being cuffed and hauled off to the hoosegow! I don’t see any of this ending anytime soon.
Anyway, as a way to forget our troubles, here’s a great Jerry Garcia Band tune you can post: