It wouldn't be a Feral Government job, but probably a pretty plum position working for either the Red or Blue squad of The Party. It'll pay pretty good, because the same idiots keep sending in money, so why not? White people need not apply, of course, unless the whole department goes to shit. Then, maybe HR will email you back if you fill out our 10 page app on-line. Don't even try to walk in the office - we WILL call security!


Part of the data that will be used. Applicant must know how to read graphs. 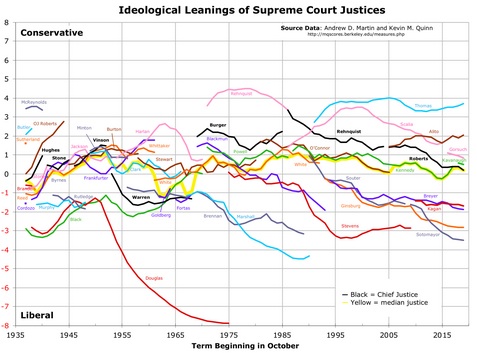 (NOTE: This is not really that useful data, as the standard for Conservative and Liberal have trended so far downwards in this graph over the years, on an absolute scale. This graph shows data that is all relative, depending on the year. Could there be one like this with absolute standards?)


This post is not some novel idea, but you do wonder why this isn't a bigger career opportunity. A good commenter on unz named Jim Christian posted the following comment under one of the many "Ding dong, the Ginsburg is dead!" posts (mostly by Steve Sailer, as when he gets on a roll ... watch out, but also Audacious Epigone posted a number of cool posts on the topic.

1: Democrats thought they were cute with the notion Ginsberg was going to drag her old dead corpse across the election day finish line. They lost the bet. They ought to have replaced her old ass back in Obama’s day, but waited for Hillary, since she was the slam dunk. Hillary lost, Ginsberg is dead and Trump gets a third pick. High time, too. That woman has been brain dead for at least ten years, I don’t care how much they try to prop her up.

2:The Democrats also think they’re cute saying “the people and the elected President must select a justice”. Well, the people elected Trump love him or hate him. And Trump being President had BETTER make a pick and get him in. We can’t go into this election with an 8-member court with the last candidate and head of the Democrat Party (Hillary) telling Biden not to concede under any circumstances. The Republicans absolutely must replace her, we need nine members on that court this year, period.

3:Ya gotta love their hysteria. MSNBC and CNN were just precious last night with their panty-shitting.

Yeah, there could be, but doesn't seem to be, a lot of strategy involved in this Supreme Court Justice appointment game. With the appointment of justices being the job of the President, the unlimited terms (these two both specified by the Constitution, Article II, Section II, paragraph ), people living a lot longer into old age, and a 2 political party system (not something the Founders wanted), and most importantly, the judicial activism that is now illegally part of the SC's function, there is a lot at stake. Peak Stupidity wrote a decent sized post about this long ago in When did the Feral Government get OUT OF CONTROL? and our just previous article yesterday linked to a 39 y/o very good article on the subject by Peter Brimelow (way before his Alien Nation/VDare years).

With so much future political decisions at stake in who these damned 9 robed prima donnas are, the appointment by the President and the Senate confirmation process is a big deal for the 2 squads. Mr. Christian's point (1) was an expansion of what I mentioned in an unz comment somewhere. Should Justice Ginsburg have resigned back during the last year of the Øb☭ma administration to do right by her squad? With enough time for Øb☭ma to appoint another justice, maybe another from the feminist leftist harpy farm team who was 50 years old or so, the Blue squad could have gotten 35 more years of this creative "Constitutional interpretation", hell, 50 with some new brain transplant technology (better rule it legal first of course).

Then again, maybe this other guy has great cholesterol numbers, doesn't smoke anything stronger than marijuana, and they've got a pristine new treadmill down at the SCOTUS ICU for later on. Can he outlast a double Presidential turn. Bail out while the appointing is good or stick? Someone do the math.

For the Red squad in particular, since these people are known to go native way too often in the Washington, Federal Shithole (see The Cocktail Party theory of Political Stupidity), you may want to just hire some OTHER guys from Vegas to create new openings when you have the ball.

Should the 2 squads not have teams of bright people to work the numbers and get the optimum SC Justice strategy? They would need actuaries for figuring long-term odds, maybe some specialist doctors for the near term, hospital techs and lab associates for stool sample anal-isis, policy wankers errr, wonks, and for the most critical part, election odds specialists from Vegas. Call em the SCAS teams, Supreme Court Appointment Strategists.

To me, it'd be really interesting work, I mean, were I not one of the hospital techs or lab associates. You should be able to retire comfortably from this easy-going position, which most days would just involve updating graphs and surfing the web. That is, unless the wrong justice dies out of the blue, in which case, Ya Fiyad!

Moderator
PS: Weird, I got your extra one yesterday, and I'll take care of this one in a while.
Ganderson
PS. For some reasons my posts go up twice.
Ganderson
PS The court started going out of control with Marbury v. Madison.