... that this Panic-Fest is nothing more than hype and a good part of it is specifically against him personally. 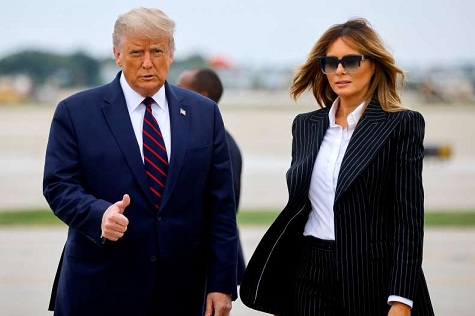 (It really is confusing. That's not a dig at Trump.)


You don't get breaking news like this all the time from Peak Stupidity. By "breaking", we mean that we were reading the usual opinion posts by Steve Sailer and he posted something on it - if he gets obsessed with this, there'll be 2 more a day for a week!

There's no reason TO get obsessed with this though. Mr. Trump has probably been tested daily, or at least weekly, for whatever the test really tests for. (Antibodies?) Now, he tested positive. Hey, I have a number of doctor friends. One of them talked to an Infectious Disease specialist (not a blowhard like Fauci, but a doctor who tries to heal people) about this Kung Flu in April. "Hey, do you know anyone who hasn't had the common cold?" he asked my doctor friend. "Well, it's gonna be like that."

President Trump and the rest of us are going to get some of these virus particles in us, some a little bit, some a lot, some with no idea it ever happened, and some with some problems. Now he's got them. BFD. Does he even have an actual CASE of Corona? I don't know the answer, but I'd advise getting more than 1 if you're an outgoing guy like this and you now have to spend 2 weeks quarantined. (I hope the White House has a pool table or at least Frogger or that Kiss-themed pinball machine.)

Donald Trump is 74 years old. He's a decent bit overweight but not obese by any means. I've not heard of him having some chronic health problems like diabetes or cardiovascular disease. For people 70 and up, I read a number like 94% for a recovery rate. That includes people right on up from there, and it includes people who were in the nursing homes at the wrong time. Maybe for a President Biden, the White House will be a nursing home, but it's not right now.

Additionally, I've read that the President has been pushing, and therefore taking himself to set an example, that hydrochloriquine and zinc and that. There's probably something to that. It shouldn't have had to been up to the President to promote this or that anyway. How about the Surgeon General speaking up?

I forgot to mention that President Trump's wife Melania has the Kung Flu virus in her too. I see that as a good thing, as this means at least relations in the White House bedroom are better than they were doing the Clinton Presidency.*

The political talk may be interesting, but in normal times this would be a minor story.

One more thing: In a REAL Constitutional Republic, something Americans of 100 to 231 years ago would be familiar with, you don't care that awful much if the President is sick or dies. So what? He's administrator of the Executive Branch, per Article II, that's all. With a little delegation, anyone can do that. It's not supposed to be like the Czar of Russia getting sick in 1625, and the successor may or may not be a brutal tyrant.

* Of course, she'll be fine. She just turned 50 and from the rear view at least, seems to be in excellent shape.

MBlanc46
PS The last nail in the coffin of the rapidly disappearing Trump presidency?
Moderator
PS: You are quite right, Rex. It's not having that effect at all. If I ever thought I might be really sorry for not wearing a mask, I'd wear one. I appreciate a lot about having Donald Trump as President rather than ____, but he's not my go-to guy for healthcare information either, haha.

Thanks for writing in, Rex.
Rex Little
PS From an anti-Trump commenter on another blog:

"...when you carry on like he's been carrying on -- which includes how he has and hasn't been taking care of himself, like, viewing the whole thing as overblown and eschewing the mask -- this is a logical outcome, and it will be of great value to the public to know this louder and clearer than before, most especially Trump's believers."

I don't think it's having quite the effect this guy expects, at least on you.
Moderator
PS: I'd say that would have been, or is, a pretty good plan, Alarmist. See, now that's some at least 3-D chess type thinking and planning, if it's the case. It's too bad he doesn't work this way with long-term issues like immigration and the war-mongering. Who knows?

I will be relieved if Mr. Trump gets re-elected, but that doesn't mean I expect too much. I would love to be pleasantly surprised.
The Alarmist
PS
Could always be a false positive, but my take is that Trump had it earlier in the year, which is why he did a course of HCQ already, but the “newly detected” anti-bodies give him a reason to skip debates that are clearly rigged against him, and the speedy, manly recovery will show the average American that he is an unstoppable force.
Moderator
PS: I was gonna stick in my last minute Deep State conspiracy theory in this post, but it was a little convoluted. I'll have to await Ron Unz's learned proclamation on WTF is going on. (That was facetious, BTW.)

Yeah, hell we got some of that Hydro-whatever from China because my wife insisted and she's got me popping an occasional one when I have anything outside, like a hot chocolate or the 2 big chili dogs I had the other evening. She is under the impression that because the box says "Hydro..." that's what's in there. They are probably some rejected aspirin or something, who knows. They even make fake eggs to sell on the street over there, so anything goes.

Nice handle, Covid Sharia. Thank you for reading and commenting!
Covid Sharia
PS October Surprise number one. The Derp State is going to be fast and furious the next few weeks and the average drooling dullard will fall for it all.
These ultra bestest made in China test kits are always right and comrade Billy Gates will get a cut of the proceeds along with Dr. Fraudski.