The Face of the Chinese Communist Party: 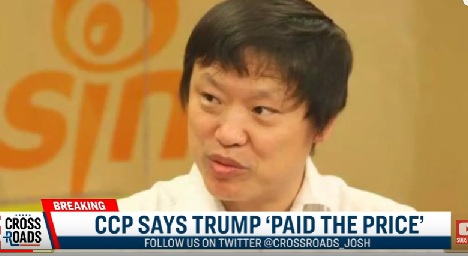 This is just another virus that America has infected the country of China with, ON PURPOSE. It's those infected US dollars we tricked them into taking in return or all that Cheap China-made Crap. I wrote "another" because, see, the Chinese, hence Ron Unz also, believe that WE are the ones that infected them with that Kung Flu shit, it's nothing to do with labs or bats, man, nah, bats are cute!

This is not just the usual tit-for-tat statements that are part of diplomacy. The picture above doesn't say it all, but I couldn't get one off my Chinese source that'd make sense in English.

They are celebrating over there. Per my Chinese source, the people have been so flooded with BS out of the CCP that there is general happiness about President Trump's illness. We Chat messages of glee are flying around.

You know, this kind of thing is common in wartime, but ... Are the Chinese on a wartime footing emotionally right now? They need to calm the fuck down. After all, Americans mostly just don't want to keep up a half trillion dollar trade deficit up year after year until we have sold out our whole country*? Is that too much to ask? Peak Stupidity gives the President kudos for his efforts on the very-unfair trade situation often.

This Trump Derangement Virus, known by the epidemiology community as Trump Ooppositional Virus Idiot-favoring Disease, 2020, or TOVID-20, has got a pretty high R0, apparently. It also spreads through wheat and pork shipments and stays on doorknobs and the surfaces of returned broken Chinese goods for months at a time. Sometimes it spreads even through the internet. Be careful out there!


* This is the 3rd segment of our series "There's a lot of ruin in a nation.", the title of which is a reference to the OTHER Adam Smith. You may want to start with Part 1 and Part 2.

Moderator
PS: It'd be one thing if China was just the dominant power and they acted like the US has as an empire. However, the Orwellian shit going on there now has me thinking that the dominance of China is going to resemble the End Times as written in Revelation more than anything else.

There's a video out there with a future Chinese lecturer going on about how Americans could have been so stupid as to let things go this way. I'll put it up sometime if I can find it, Mr. Blanc.
MBlanc46
PS Folks who’ve got 20–25+ years ahead of them are going to see China as the dominant economic, military, and civilizational power in the world. The irony of it all is that the West simply gave it to them. First and foremost due to the greed of our elites. The greed of our elites is without measure. Second, the West has lost faith in itself and its civilization. It would be interesting to read how future historians analyze the rapid decline of the West, but, even if I were around for it, I wouldn’t be able to read it, because I don’t read Chinese.