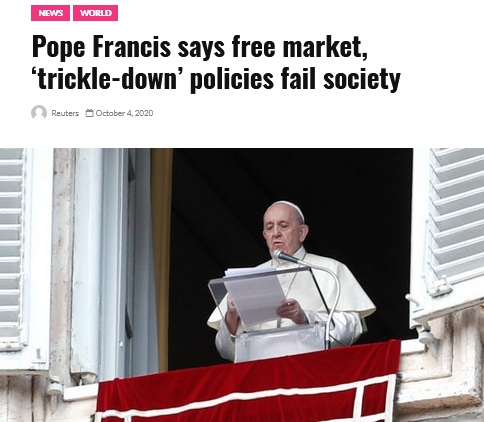 Free markets work. "Trickle down" is not an economic ideology, but a catch-phrase.

Peak Stupidity will take a break from the Kung Flu stupidity and the election stupidity for a post here to go back to one of our least favorite topics, this So-called Pope Francis they've got over there at the Vatican. Not being Catholic over here, we can say what we want, but certain Catholic people, at least cough Ann Barnhardt, cough, cough*, do not seem to like this guy either, based on religious reasons.

Now, all these guys can do is just run their mouths about politics. They have other things that they are supposed to run their mouths about, of course, but this new guy takes the cake. (I write "new guy", but it's been 7 1/2 long years.) I mean, one could say Pope John Paul II, who spoke out about Communism, was "all political and shit" too, but Communism was/is by nature anti-religious. There are obviously not many blatant Catholics in Communist societies, (in Vietnam, there were the most educated and worldly Vietnamese, so they were the first to try to get out). Communism is a religion in itself, and Communists don't want competition for religion, along with for everything else.

Peak Stupidity has railed on this guy Francis before - we even have that whole Topic Key. His latest words that we question are described in this article from Amny, where the image above came from. (It's some NY City website, that I just came upon - one can look a thousand other places for the info.)

As I noted, the "Trickle down" theory is really just a catch-phrase said first by Will Rogers, then brought to the forefront by remarks by President Ronald Reagan's budget director David Stockman**. He thought "supply side" was a more acceptable term to people.

I am sort of agreeing with the so-called Pope in using this terminology in disdain. Pope Francis is against what he sees, a bunch of huge corporate monsters that are making a killing, with elites that make many 100's of times what an average hard-working guy makes. Sure. However, the guy's logic is UNSOUND.

He thinks free markets are the problem. What kind of free market does this fool imagine we have? Show me free markets. Where are these free market of which you speak [/Seinfeld immigrant imitation] That's the problem with lots of political talk against the Crony Capitalism we see now. The speakers/writers create the wrong bogeyman in their minds to fight against.

Secondly, this Pope has not done any kind of job defending the Catholic Church and faith. It's been quite the opposite. That's most of what we've gotten on his case about in these pages. His support for immigration invasion, his equivalizing Christianity and every other religion are not things that would have been contained in his job description as specified by Vatican HR.

Note, for the record, this Francis, aka Jorge Mario Bergoglio is from Argentina. (Who is he running from anyway, what with the alias and all? We got the internet all over your ass, buddy.) Peak Stupidity has discussed the political landscape in Latin American countries before - see Mormons, Commies, Shitholes, and Crown Jewels. To bottom line you, there are a couple of percent rich bastards and a high 90% of poor peons, and the peons want some of the rich bastards' stuff and occasionally will go Communist to do so.

So-called Pope Francis (yeah, paid by the word here!) has got that "Liberation Theology" stuff ingrained in him, and a trip over to and long stay in Europe isn't going to shake it out of him either. He's a Latin American Communist politically. I haven't excerpted a thing yet, so the reader ought to read the article, which seems to be slanted toward this guy. I'll just excerpt this one sentence that says it all:

Francis repeated past calls for redistribution of wealth to help the poorest and for fairer access to natural resources by all.

Redistribution is not charity. It is always meant as forcible redistribution, otherwise we would just call it charity. If this Pope were going off about Jeff Bezos, Bill Gates, etc. giving more money to charity, including, hey, how about a little to Christian Churches or causes, then I'd have no problem with his pronouncements. No, he wants to tax the hell out of them, which everyone who's seen what happens know WILL NOT WORK. In Crony Capitalism, Big Biz and Big Gov make the rules together. The middle class, which Pope Francis may not have any familiarity with, will get screwed. Does he want to live in a Latin American society? If so, what's stopping him from going home ... besides his Commie and pro-Western-cultural-destruction speechmaking.

You know, except for that millennia or so in the Middle Ages, I think the Catholic Church has been better off with the standard European Popes. I looked on Wiki's Wiki Pope list page to check birthplaces. Holy Moley See, they are up to #266! Almost all seem to have been from what is now Italy with lots of them being born very close in to the Vatican. Per so-called Pope Francis' page, which saved me a LOT of trouble, the last non-European Pope was from the 700s and he was from Syria. We had that great guy, already mentioned, from Poland recently, John Paul II, who was a pretty big factor in the ending of the Cold War and defeat of the Communism of the day. Latin America? Isn't there a way for HR to screen these people out in the database?

[Sopranos mode back on.]

Now we got dis fuckin' guy?!


* No, I didn't just catch the Kung Flu, and I don't know exactly why Ann Bernhardt rated the "this is bullshit" style coughing. I just think she's quite the character. BTW, her latest post is right on the subject of this guy, Praying the Rosary in Light of the Bergoglian Antipapacy: The Joyful Mysteries. She takes Catholicism very seriously, which I just can't follow her on. I only got onto Miss Barnhardt's site way back when she had this hilarious video of her burning pages of the Koran. In the video her bookmarks for the worst of the passages were strips of cooked bacon! Mmmmm, bookmarks .... [/Homer]

Oh, and she called Lindsey Graham a jackass a bunch of times, which is not only correct in general, but the cussword "jackass" is extremely underutilized these days. Freakin' Millennials - bunch 'o jackasses! (That was just written to show the use of the word. No offense intended, believe me!)

** He is quite the pundit today. I think he writes some good stuff, from what I've read occasionally.

Moderator
PS: I believe Miss Barnhardt is fond of that one too, Mr. Blanc. She uses all forms of the word, and it's only in the videos that it comes across nicely.

Like I said though, she's a character. Really, she's half way between a character and a piece of work.
MBlanc46
PS And the noun “jackassery” for characterizing the behavior of jackasses.