I feel tears welling up from down deep inside, like my heart's sprung a big break ... 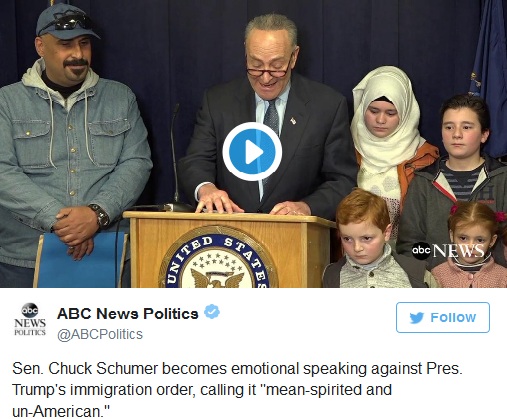 Stop whining, Senator, or we'll give you something to cry about!

Apparently, trying to control your country's borders, and AT LEAST, AT A MINIMUM, FOR NOW!, keeping people that want to kill you out, is very "mean-spirited". Chuck Schumer stands with some kids in the photo-op, that you figure are probably not bad kids - it's hard to fault the little ones for anything. Schumer doesn't want to listen or understand anyone that tells him that who knows what the teenagers will be like once they grow up with parents (and all the people in their surroundings) that never really like the Western ways, and may even have a real grudge, seeing as we may have bombed the crap out of some family member's wedding back in "the old country".

This lady's video will show you a little about the culture of these people, if they live as they do in "the old country" - which they do nowadays, as there is no assimilation (assimilation is mean-spirited or something.)

You wonder if the Honorable Execrable Senator has thought a little farther ahead about some American kids who will grow up in a strange country with a strange religion. Most of our American boys have no experience with goat and homo and homo/goat sex (I haven't seen a single video at the public library), and the American girls are used to dressing up nicely, not putting on the same old tent each morning. If you go back only 25 years or so, nobody figured a 100-person-dead, 200-person-maimed massacree a few times a year is just the price you pay for DIEVERSITY.

How about you and your neo-con butt-buddies, like Miss Gramnesty of SC, and the senile old Juan McCain, stop starting wars and bombing the hell out of people all over the Middle East, so there won't be as many refugees? Is this the type of logical thinking ahead that only men can do - the type that don't cry on TV during press conferences?

What we at PeakStupidity think is that, based on his feelings and moods and his emotional state, this slobbering fool is not a man at all but a woman. We figure Schumer* changed to a woman a while back, but has just not finished the paperwork.

* Look for an Execrable Charlene Schumer on the Senate floor in the near future.


As to the post title, it's from The Race is On, written by Don Rollings, sung by George Jones back in 1964, and, as usual, done best by a truly All-American band, The Dead, in the early 1980's on their Dead Reckoning acoustic album:

Great singing by Bobby, pretty good lead by Jerry, considering it's acoustic, nice piano by Brent Mydland and these great country lyrics with the racetrack metaphor(?).

First verse:
I feel tears wellin' up
from down and deep inside
Like my heart's sprung a big break,
and a stab of loneliness sharp and painful
that I may never shake.
Now, you might say that I was takin' it hard
since you wrote me off with a call,
but don't you wager that I'll hide the sorrow
When I may break right down and bawl

Moderator
Thanks for commenting, Mr. Turgidson (twice, I see)! Looks like your promise to support the immigration will not happen in this universe - these types don't live with, or like, the rest of us.

So we're glad you support the moratorium, then. Do you read VDare.com?
Buck Turgidson
I will support the immigration of more third worlders when I see 5000 of them move in right next door to Schumer. I also want schlummer to pay for all their medical bills, and their rent. Failing that, I support a full moratorium on all immigration.