Do we have any women readers that would like to chime in on this, ... anyone, anyone, Bueller's hot girlfriend? ("So that's how it is in their family?") 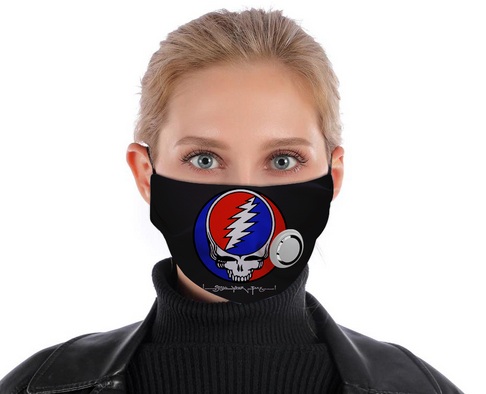 I read a long time ago, I believe in one many issues of erroneously sent Cosmopolitan magazines, which my roommate and I would keep to look at the girlie pictures, that dressing nicely involves accessorizing.

For men, we have it easy. Just try to remember to put your belt on, as explained in Trending in Breakfast Attire. Women have lots more accessories, including scarves, hair clips, shoes, old "I'm with stupid her" buttons, and more, that they have to match up with their clothing, which has to match their skin and hair color to begin with. They must spend a lot of time buying different colors, getting all that right, then the make-up and finger and toe nail polish have to match all that ... whewww! No thank you.

The newest thing, for women at least**, is Kung Flu face masks as accessories. This means that women who are down with the panic must go shopping yet some more. Ugghhh, right? No? OK, right. There is a market out there for designer face masks, though I don't mean Gucci and Yves Saint Laurent yet, cause the Chinese manufacturers are not quite set up to make the knock-offs yet. I mean that multiple colors for accessorizing must be purchased, the thought of which came to me as I saw a black woman in a red dress with a matching red face mask***. The couple selling face masks out on the lawn near me were at it again today.

I couldn't help it. If I'm gonna have to wear a mask in certain places, well, as one of Jerry's Kids, the least I could do is get one with a "Steal Your Face" logo. This is the skull with the lightning bolt that is my favorite DEAD logo. The one I bought is not the one shown above and doesn't have that fancy venting system - anyone know what that's about anyway?

"Rat in a drain ditch, caught on a limb, you know better, but I know him.
Like I told you, what I said.
Steal your face right off your head.

Nine mile skid on a ten mile ride, hot as a pistol but cool inside.
Cat on a tin roof, dogs in a pile.
Nothin' left to do but smile, smile, smile.

Goin' where the wind don't blow so strange,
maybe off on some high cold mountain chain.
Lost one round but the price wasn't anything,
A knife in the back and more of the same.

Same old, rat in a drain ditch, caught on a limb.
You know better but I know him.
Like I told you, what I said.
Steal your face right off your head

Ooh, nothin's gonna bring him back


PS: Commenter Ganderson. If you have a favorite version, by all means tell me which one in the comments. A youtube link would be even better. I didn't spend much time on this selection.

* For some reason, I ALWAYS think of Tennessee Jed first when I think of the lyric, but it's not from that song. Every! Single! Time!

** For men, though, there are the logos and all too. You know that's another post about the ridiculousness of it all. It's not just T-shirts and sneakers with which we are doing free advertising now.

*** That'd have been easier and cheaper to deal with in the old America, with women making a lot of their own clothes - just cut out extra material while making underwear or something. Of course, that traditional America would not have gone for this Panic-Fest to begin with.


Moderator
PS: Known Fact, so what is Bazooka Joe supposed to do? He's had that look since I could chew bubble gum. Honestly, I don't think his comics were that funny to me even when I was 5.

Your Governor needs to have his ass kicked.
Moderator
PS: I see, Adam. I would think about sending Mr. Sailer one like that though, in a joking manner. I think he'd take it OK. He went overboard about the Kung Flu for a bit, but he seems like a guy who can take a lot of criticism, especially just gentle ribbing. He could use the Emmitt Till one and hope for some interesting conversations!
Known Fact
PS I usually go with the Antifesque bandana look, but was informed by a door-guarding Karen at the store yesterday that as of today that's not enough for Gov. Cuomo -- real masks only!
Adam Smith
PS: "...if it's real"

Top of the evening Kind sir, and Mr. Moderator...

I hope this message finds the both of you Well and Happy...

As real as it gets, and as real as anything you will ever find on the interwebs or the internets...

Or most anything in between...

And not a fake or a forgery...

I photogimped it myself, with my own mousehand...
(All four of 'em)

☮
Allie Divine
PS I feel like it creates a bit of a Catch-22 for the enforcers. How could they kick me out for wearing a mask? It meets all of the local guidelines - covers the nose, mouth, and chin - and I'm pretty sure some public health figure or other in the news was encouraging us all to make homemade non-surgical masks...they didn't say we couldn't be creative.
Moderator
PS: Thank you for writing in, Allie. Yes, that is pretty bold and in your face (of course, that's sometimes what the guy's want ... OK, I'll stop ...)

I hope you strike up a lot of conversations with that face mask. I wonder what happens if they try to kick you out of a store for it. I'd like to see that go viral. It'd show everyone just how ridiculous this whole thing is.

For Mr. Smith, I pulled up your pics. Thank you for those. Yes, Mr. Sailer would LUV that Emmitt Till one, man. He does have a P.O. box where you could send it and make his day, I mean, if it's real. (Of course, then you're giving money to these idiots that you'd rather not give any money to.)
Allie Divine
PS Female reader here. I think the designer face diapers are ridiculous. My response to the requirement for masks at my local grocery store was to crochet one in flesh coloured yarn (cotton, of course, for breathability) and then used my awesome crafting skills to crochet a 4-inch pussy with big frilly hot pink lips, surrounded by this fabulous brown fur yarn I found called "shag carpet", which I then mounted prominently over the nose/mouth/chin region. It's hilarious, I felt like a friggin genius when I put that together. My rationale, if you're going to make me wear a mask (I have kids to feed so boycotting the grocery store isn't feasible) then you're looking at snatch! I actually enjoy wearing it, just for the looks on some people's faces.
Moderator
PS: I'm glad to see you're around and writing, Mr. Hail. Thanks to the rest of you for the comments too. I read them yesterday (haven't gone to Mr. Smith's links yet).

Well, Robert, if the blindness didn't get you, well the #MeToo would! What a life though, if we were not asexual, but Bi-sexual... wait, not tike that .. if we could breed by ourselves. Yeah, probably not a lot would get done. It would save a lot of money on flowers and fancy dinners though ,so ...
Hail
PS

There are social historians of the future who will find this part of the CoronaPanic phenomenon of 2020-21(?) worth serious attention.

What I mean is, tracing the rise of "mask chic" would be useful thing to do in understanding the Panic, its critical points, and the point at which it had become elevated to state cult.

(It's really bit masks, though that is now a catch-all term, but more properly "face coverings," right. They are often just thin scarves, of dubious value of any kind, especially given that they are constantly touched. They get the job done re true believers not getting angry at you; i.e., they are a classic religious symbol like the Islamic head covering for women or many others past and present.)

There was never an imperial proclamation to the effect that "the religion of the land shall now be Corona for an indefinite period; stand back and stand by with faces covered, subjects." We need to find signs of its ascension, and the new religious garb of mask being institutionalized as quasi-status symbol is a good one.

When did mask "face-covering" chic begin in earnest?
Robert
PS: Apropos of nothing, and completely useless:

After observing a couple of garden slugs behaving oddly; I looked up their mating habits (a decade or so ago, I hooked up a [male] tarantula). Apparently, they are hermaphodites, and can fertilize them selves.

I am grateful that we are not so; from the age of 16, I would not have left the bedroom.

☮
Adam Smith
PS: I thought about making this one for Mr. Sailer a few weeks back...

Thanks for the inspiration Mr. Moderator...

☮
MBlanc46
PS I’ve not been as anti-mask as our genial host. I’d rather not be frog-marched out of the supermarket over a principle. I started by putting my bandana over my face. Then Madame found some 3M painters’ masks in the basement. Lately, she’s been buying white fabric masks with a metal clip to hold the thing tight to the bridge of your nose. I absolutely refuse to use anything but plain white. I’m damned if I’m going to make a fashion statement out of the blasted things. I guess that’s where I’ll come down on principle. I’m beginning to fear that this business might become permanent. By the middle of October, the panic should have been over. Instead, they seem to be ramping it up again. Maybe after Mr Biden is safely ensconced in the White House, there will be a return to the status quo ante. Or perhaps they’ll attempt to make mask-wearing/social distancing/bars-and-restaurants-closed permanent. If so, what do we do?
Ganderson
PS. I might well have picked the one you picked.