Another household use for the common face mask 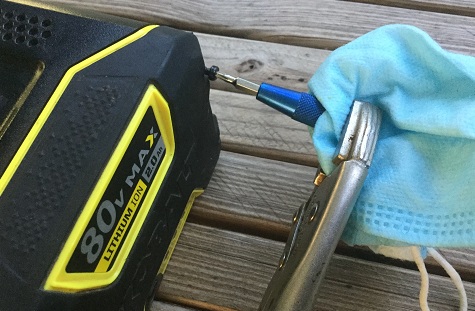 Due to a certain family member's squeamishness about the Kung Flu, which has thankfully mostly dissipated finally, we do have lots of the regular medical face masks all over the place. I have one or two balled up in a pocket, besides my Dead Head one, then there's a box in the living room, some oldies but goodies in the car I think ...

This post will either read like Reader's Digest or Popular Mechanics to you. Peak Stupidity had found yet another way that these stupid ubiquitous face masks can be used around the house. As a good homeowner, I have to blow leaves quite often. The time is nigh. That sounds ominous, but after so many years of resisting these blowers, I finally quit raking cold turkey 3 years ago. I got a Kobalt electric. I really had to have batteries as, in some situations up high, a cord really could have made me bust my ass.

The 80V 2.0 Amp-hour battery was OK for the first 2 seasons. Sure, I had to take a half-hour union break, as I called it, every 20 minutes, due to my having just the one battery. It was pretty impressive that this ~ 4" x 3" x 6" package could power the leaf blower on high speed for 20 minutes.

Well, the battery life has petered out and I'm down to 7 minutes of work time now, with the same union break time rule, as far as I've noticed the latter based on the charge time. Someone at the Master Executive Council has done a bang up job on our last contract, apparently.

I gotta face it, this battery is dying.

A friend walked by and I mentioned all this. He noted that lots of these rechargeable battery packs in tools, and I've opened a few myself, have just regular or at least easily obtainable cells inside. They can be replaced with good rechargeable batteries. Hmmmm?

Well, they did not make it too easy. The 4 Torx-head screws were not a size I had on my regular fold-out one, but luckily a friend had gotten me a set of jeweler's screwdrivers a few years back. These screws were not TINY, but one of the medium sized Torx drivers fit well. However, the little blue-anodized handle of the set was not made for any serious torque (plus, the bits aren't made for too much torque anyway.) The screws were in tight though. I needed to use the small vise grips, but didn't want to mess up the knurling.


Not your father's battery: 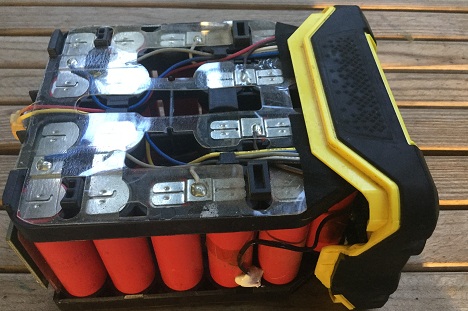 Finally, as for the result, it really was just a learning exercise. There is a circuit board, the check energy level switch, and something like 20 of these cells, as one can see above. What would be the chances I'd come out ahead on money AND with the pack still in working order? Not good, and that's not even with accounting for my time being worth something.

Oh well, $89 for a refurbished pack, which to me means new cells in a cleaned up case with the used electronics, is what they want, plus shipping and tax. That's OK by me, as a new battery costs over 75% of the whole blower with the battery. I guess that's the idea, suck you into the blower ... expense, then sell you expensive batteries until the blower itself dies a Cheap China-made death.

Keep these face masks handy. You never know when you might need on in These United States.

Moderator
PS: Right, Adam. I get ethanol-free and put stabilizer in it. The guy who sold me the chainsaw was adamant about getting the gas out of the saw when you're done AND not using gas that's more than a month old. Unless you are a tree guy, that gets ridiculous and wasteful. That's why I use the stabilizer and try to use up the gas even when that means splitting a log with the saw!
Adam Smith
PS: One more thing...

Always use ethanol-free gasoline in your small engines...

I don't own any cordless electric tools...

"I'll just throw it in our trash, and keep a fire extinguisher handy.;-}"

You could just pitch it in a creek or something...

☮
Moderator
PS: Ha, I was typing just while you were writing in, Mr. Blanc. I haven't thought about corded tools in a while, but I still have an electric drill with a cord. I better hold onto it, as there's something about having all the power you need vs. the limits of even these modern batteries.

There must be plenty of corded Skil saws and all that, right, or have I been not paying attention. Skil (aka, circular) saws ,then the "saws-all"s (recip. ones), are they mostly cordless too? Hell, I just went to the building supply store twice recently and even moseyed through the tools (can't help it.) I didn't notice either way on this.

BTW, for the blower, I know that I need to get up on the roof sometimes. A corded one could get me killed there by snagging on something.

I also just don't want to screw with small gas engines that don't run often. The mower, fine, a chainsaw, yep, but that's it, I think. They are not guaranteed to just start up 6 months after last use, like a simple electric motor is... pretty much.
Moderator
PS: Well, there you go, Adam (about the dimensions). I meant to write "buy", so, yeah, I've got the same attitude. I think I have too much clutter already to keep this old one, that is, once it gets down to such a short use time as to be ridiculous. I'll just throw it in our trash, and keep a fire extinguisher handy.;-}

Yeah, these things aren't allowed in the cargo bins of commercial airliners for that reason. They'd rather it all be in the cabin where someone can get to it to put it out, just in case. I've seen videos of these things burning.
MBlanc46
PS I’m not keen on small, cranky internal combustion engines (lawn mower nightmares from childhood), so when possible I use electric implements (lawn mower, garden tiller, leaf vacuum, hedge trimmer, chain saw). I get that battery technology is much improved, but I still prefer corded tools. I was a bit shocked, when buying a drill for our winter hideaway last year, that almost everything was cordless. Only one choice for a corded drill. By the way, I wouldn’t be too certain that the covid panic is coming to an end. With cold weather arriving and flu season starting, covid cases will be on the upswing. Prepare for Lockdown II. Worst case, look for it to be permanent.
Adam Smith
PS: Good morning Mr. Moderator...

Apparently the 18650 cell is 18 mm in diameter and 65 mm tall; hence, its name 18650. I did not know the reasoning behind the numbering scheme. Thanks, to you and your friend.

I do not rebuild the battery packs either. It's much easier to replace them. As you've noticed, they are not easy to put back together. The cells are spot welded and there are often several charge controller/protection boards in a single pack to help balance the charge and protect the cells from overcharging and also from discharging too quickly or too deeply.

I do tear apart the pack and reuse the good cells. I pull the metal tabs off with a pair of pliers and smooth off the spot welds with a file. I test them with a meter and charge them to 4.2v (optimum charge for battery longevity is 3.9v) and it's pretty obvious if you have a dead cell as it will not hold a charge. I use them to power flashlights and for other electronic purposes.

Do be careful though, an internally damaged lithium-ion can reach thermal runaway and start a fire. (I have never had this problem.) Garbage trucks have been known to catch fire because people simply discard lithium-ion batteries. They really should be recycled.

☮
Moderator
PS: My friend noted that lots of the battery cell type numbers are the dimensions in mm. Is it diameter first, then length? I could see those being 18mm diameter and 65.0 mm(?) long. What it comes down to though, is the time factor.

These cells are not simply inserted between spring contacts. I think there's a spot soldering involved. I also didn't see an easy way to take apart the whole assembly. No screws were visible anyway.

I think I"ll but the refurbished one. Sure, it probably takes one worker 15 minute to do one, but I'd be involved for hours.

I suppose this is one of those things, that if you have the inclination, you could get into to think of BEING a refurbisher for others. I'd guess there are a lot of these batteries out there.
Adam Smith
PS: Good evening Mr. Moderator...