President Donald Trump: the Bad, **the Good**, and the Ugly

The Bad was discussed just a while back today. We'll get to "The Ugly", though it won't involve the President himself. Youtube's got it all cued up for you here. 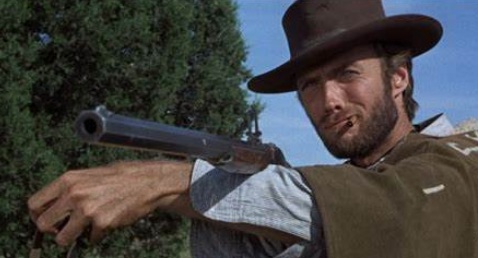 VDare, THE go-to site for factual information on immigration, had some really good news yesterday. Because I already have my title set in stone, due to the last post, I'll just give you what would be a better one for this post here in big headline-style fonts.

(OK sub in "Bemoans" for "Endorses" and you'll see that the New York Times is still a compromised institution.)

VDare's Washington Watcher II has written a VERY encouraging post about some success from President Trump's policy in NYT Delivers Unintentional Endorsement Of Trump's Immigration Triumph. It's really not "policy" per say, but below the radar, behind-the-scenes, action by this President and his employees that Washington Watcher II is talking about.

That's fine by me. I'd rather see blatant in-your-face policy, like just ending DACA* (gonna be near a million Hispanics, plus offspring later on). I'd rather see a long-term strategy, involving legal and illegal immigration, both, with bills written and pushed for, plans to tweet the right crowds to recall or impeach the worst of the Judges of Impediment, and that sort of thing. 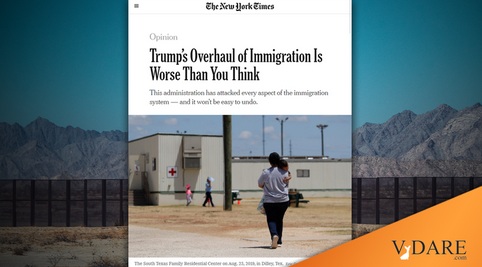 Still, the article is (as WWII titled his post) unintentionally very good news. Read the post, and you will see that everything the NY Times bitches about will have you saying Hallelujahs, or Hosannahs. (I'm not sure how you say Hosannahs actually, but it's something involving Alabama and banjos, I believe ...) The following excerpts will be of the NY Times article, not Mr. Washington Watcher II's writing.

Between 2016 and 2019, annual net immigration into the United States fell by almost half, to about 600,000 people per year — a level not seen since the 1980s — according to an analysis by William H. Frey of the Brookings Institution. (Since the start of the coronavirus pandemic, that number has certainly decreased even more.)

The 2016-19 drop “is clearly a result of Trump’s restrictive immigration measures,” Mr. Frey told the editorial board, “including immigrant bans from selected countries, greater limits on refugees, and generating fear among other potential immigrant groups over this administration’s unwelcoming policies.”

Hallelujah! Preach it Brother The Editorial Board!I believe this is the legal immigration level, as I don't know how anyone really knows the real illegal level - don't forget it's NOT just from across the southern border. I've written before criticizing the President in this way: During the time he's done nothing of note on this issue, another million or million and a half non-Conservative, non-Trump-voters have come EVERY YEAR, so it's 3 to 5 million or so more against him. Every day means smaller chances for America to recover, so these things should have been started from Day One. That's why I am very heartened by this news. VDare has never really compiled it like this before, and it's all in the numbers, which are lower than I'd reckoned - thank you, NY Times, for this great encouragement!

Border control officials said they would accept asylum applications only from people who arrived at approved border crossings, even though the law says anyone can apply for asylum once in the United States. At those crossings, asylum seekers were forced to wait for days, even weeks, in long lines just for a chance to approach the border to ask for protection. The White House packed the immigration appeals board with Trump appointees, with predictable results: Rejections increased.

Mr. Trump also used the threat of tariffs to get Mexico to crack down on undocumented Central American immigrants and to allow frustrated asylum seekers to wait on the Mexican side of the border while their cases meandered through U.S. immigration courts.

Many of the VDare writers, especially Spanish-fluent Allan Wall, have written about this other-than-Mexican immigration, the caravans, and the high-level politics between President Trump and Mexico's AMLO (I guess it'd be MAMLO) before.

Mr. Trump eventually achieved a version of his Muslim ban when the Supreme Court approved of severe restrictions on entry for residents of 13 countries, the majority of them with mostly Muslim populations. While the White House said one reason the ban was needed was lax security in those countries, it also has drastically scaled back the refugee program, which involves stringent vetting by American and United Nations officials. In Barack Obama’s last year as president, the ceiling for refugee admissions was 110,000. For the current fiscal year, it’s 15,000.

Oh, Hosanna, don't you cry for me. I come from Alabama with my banjo on my knee ... or something. How 'bout, YEA!!

Despite Mr. Trump’s promises to protect Americans from killer immigrants, Immigration and Customs Enforcement is now more than twice as likely to pick up immigrants with no criminal record beyond immigration violations, compared with the number before he took office. After being labeled the “deporter in chief,” Mr. Obama ordered ICE to concentrate enforcement on unauthorized immigrants who had committed crimes. Within weeks of his own inauguration, Mr. Trump eliminated any deportation priorities and made all undocumented immigrants fair game for ICE. With many cities resisting ICE’s more stringent demands for cooperation, the agency has also found it easier to just pick up anyone with an existing deportation warrant.

Well, yeah, it's a "deportation warrant". That is a literal warrant to literally deport somebody. Ya' gotta pick 'em up to deport 'em, I think, right? What's YOUR plan, Einstein?

At the same time, applications for permanent residency have declined since the administration announced it would adopt a rule that would prevent those considered likely to receive public benefits from becoming permanent residents. Among recent green-card recipients, 69 percent had at least one of the characteristics that would be weighed, according to the Migration Policy Institute.

I really like the discouragement factor. That was a factor very early on after Trump's election too, but these good , oops, bad reps go away when no one follows through with anything. On the public benefits bit, that's been policy since, like forever. The serious immigration interviewers care very much whether an immigrant will be a "public charge". We don't want that shit. Those 69ers are obviously a problem. Do we NEED more welfare recipients?

Ken Cuccinelli, the acting deputy secretary of homeland security, recently announced that the number of H-1B visas for skilled workers would be cut by one-third because of tighter criteria for who can get them. Critics said this would make American companies shift more work abroad.

Mr. Trump also has ended “temporary protected status” for 400,000 people from El Salvador, Haiti, Sudan and elsewhere who have legally lived and worked in the United States for decades after being provided a haven from war or natural disaster.

Hallelujah again! Can I get a witness?! I mean it, I want to be sure the NY Times is not just publishing this just to fuck with us. Please tell us you mean it when you hate this President for his immigration efforts.

“There’s so much change that has happened in the last four years, there’s no way a new administration could reverse things in four or even eight years,” said Sarah Pierce, a policy analyst at the Migration Policy Institute who was a co-author of the group’s July report.

Now THAT is progress folks. I ask President Trump, who, if he's not busy tweeting right now, may very well be perusing Peak Stupidity, to please forgive us for our criticisms. They are mostly still right, but this is what I voted for you for in '16.

Remember, there are two kinds of editorial writers, my friend, those with plenty of loaded guns and those who dig. NY Times, you dig. Dig it?


PS: The reader may wonder why I have been so pessimistic before, but I do follow VDare very closely, and I've seen plenty of discouraging articles after a few months of giving President Trump some slack after inauguration. VDare writers are always hopeful, but I could tell when they were just as discouraged as I've been, most of the time. I was so surprised by this article.

* DACA was an Øb☭ma Executive Order. I don't think these things are Constitutional to begin with, but at least just don't keep supporting the program, dude. He could have just done nothing and these people would have to go back.

MBlanc46
PS No, Mod, I don’t believe that he does. Steve Bannon told him what to say and he said it. It got him elected. But I doubt that he thinks that’s what got him elected. He thinks that he got elected because he’s great, fantastic, the best ever. Bannon got uppity and Trump fired him. Now Jared Kushner tells him what to say and he says he. He thinks that he’s going to be re-elected because he’s great, fantastic, the best ever.
Moderator
PS: VDare chief Peter Brimelow, and often the rest of them, keep saying that Trump needs to campaign on whatever success on this issue that he HAS had, Mr.Blanc.

Doesn't Trump know what got him into office to begin with?
MBlanc46
PS Well, Trump’s immigration policy is better than the Harridan’s would have been. And than Biden’s will be. If he’d pushed it harder for the past three and a half years and were campaigning on it strongly now, he’d be in a much better position to be re-elected than he is. By governing and campaigning as the champion of the American worker, he might have even garnered a bigger share of the black vote that he’s pandering for. The man really is a knucklehead.