Hahahaa! Yeah, you voted for those Democrats by a 3 to 1 margin. Reap the whirlwind, landlord bitches! 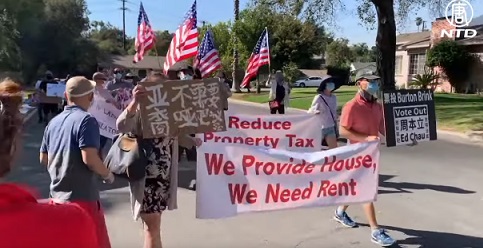 [does a left-sided torso dance on the carpet, a la Homer Simpson]


Don't complain readers. I could have put that in real Chinese, rather than my PinYin version of a cascaded translation of schadenfreude, from German to English to likely the best way it could be prolonced by a Chinaman. One thing I kind of like about the Chinese language is that there aren't many big words, the opposite of German I guess, as they just put a few simple words together. Arteries are "blood pipes" when translated literally, for example. If they even have the term, schadenfreude could be something like "good feeling others misery told him so!"

It's me with the schadenfreude today, though, as this story of some Chinese California landlords' misery makes me feel pretty good, indeed. You know most of these people in the picture above have been voting D. D's have the gimmes. You might be making a killing in real estate with your (pretty likely) saved-up $2 million in bribe money from China from your former $600/month government job. Maybe you did it all legally, from scratch, but see the D's are more open to corruption and it is a One-Party State, so you need some of that guanxi and all.

Well, California politicians, seeing as they think they can still be all nice and touchy-feely to everyone, which worked 50 years ago when the State really was rich, are at it again. Socialism says "hey, the poor tenants! How can they pay their rent when someone [looks around and whistles softly] has shut down their livelihoods due to the killer Kung Flu? We must help them out. We decree that you landlords just need to collect only 25% of rent due now. That is now enough so they you can't evict them. What's the problem? Money is everywhere. We never run out, here at the State House, it seems, so, the ayes have it. So let it be written, so let it be done."

This should sound damn awful familiar to many Chinese people above a certain age. The landlords during the mid-1960s-'70s Cultural Revolution in China were considered the "capitalist roaders". (Sorry, someone shortchanged the translator - hey, you get what you pay for.) These were the people sent to Manchuria to work in the freezing cold in the pig farms. The Chinese Commie Government of 1970 could have really used a guy like Eddie Murphy with his "kill my landlord" routine. Alas, he was born too late.

It's a California Representative named Ed Chau, who these protestors are angry at, and, judging by this sign, they do have a handle on what this is about. 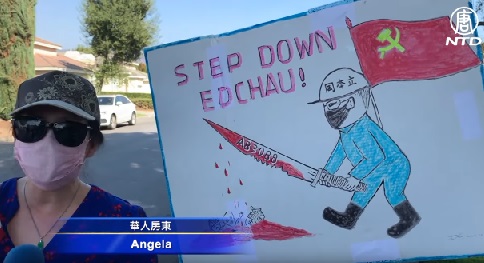 Of, for cryin' out loud, take off the stupid face diaper in the bright California sunshine! What, are you gonna get arrested? This isn't Red China .... wait a minute. Hold that thought.

One could figure that these protestors may be the 1/3 to 1/4 of the Chinese people in California who vote Republican. I understand the problem of being lumped in with the bad apples very well. Somehow though, I still don't think all these people out in the street, protesting the Socialism in California that harms THEM this time, have otherwise been on the net reading Ron Paul with kids that get their Citizenship in the Nation Scout merit badges. Were they really against Affirmative Action even before it was screwing their kids out of the best high schools and universities? I think very few of them have that in them.

Here is the video that I was led to. It is completely in Chinese, so forget the subtitles, and forget the audio except to get the tone of it.

BTW, at the very end, can you tell that the guy said "I'm so-and-so, reporting from [in Chinese still] Los Angeles, California [in English!] Holy crap, do you see what I mean about the pronunciation?

Oh, believe you me, I do know that being forced to keep tenants who are paying 25% of normal rent is not "sustainable". California especially has onerous landlord/tenant laws of all sorts, as in onerous for landlords and great for tenants. (Just for a movie that will scare you straight out of thinking of being a landlord in San Fran, watch the movie Pacific Heights some time - great movie - Michael Keaton is a hated character for a change - that doesn't spoil the movie. Two thumbs up.) The rent may not even cover property tax! It's not like I don't feel for you on that score. It's been just the general idea that California Chinese people are still only out for the sake of California Chinese people that makes me also feel this for you:

Yeah, it was hard to put this into words up above. Every moving picture tells a story, don't it?.

Plus, at least they haven't sent you to a pig farm in Vacaville* yet, right? So there's that?

MBlanc46
PS The Left will eventually learn. Unfortunately, that won’t occur until the republic that our ancestors built lies in ruins. The Chinese government will then be able to buy up the remains at fire-sale prices. I wonder how many of our “revolutionaries” will end up in labor camps when that happens.
ganderson
PS Hockey players and their hot WAGS. That's it!