... and blue eyes cryin' in the rain, down in Luckenbach, Texas, he ain't no more feelin' no pain. 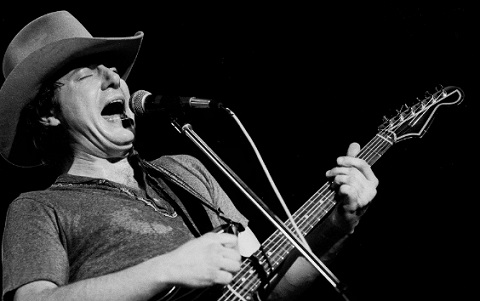 Jerry Jeff Walker died 3 days ago. I really don't know very many songs by the man, but I always liked that Texas outlaw country music. Peak Stupidity did feature his Up Against the Wall, Redneck Mother. From that post, I mentioned where I'd first heard of him:

A hippie chick was riding in the club car of an Amtrack train with me on a trip across the glorious West when I was younger. I let her listen to The Dead from my expensive "walkman" knock-off cassette player, and she raved about a country singer named Jerry Jeff Walker.

It was a few years after hearing the name from that hippie (or hippy?) chick until I realized that Jerry Jeff Walker was the guy singing "Jerry Jeff's train songs" in Willie's part of Waylon & Willie's great song Luckenbach, Texas.

Funny thing is, Jerry Jeff Walker was not originally a Texan. He was born in Oneonta in upstate New York. After traveling around all over the country, he settled in Austin, Texas, way before it turned blue, in his early 30s. I guess we can consider him a Texan now.

I am surprised that Peak Stupidity has not featured the great Waylon Jennings and Willie Nelson together in Luckenbach, Texas (back to the basics of love) (from 1977) already. I checked, but nope. Here you go:

If you want to hear one of Jerry Jeff's train songs, here's one, Desperados Waiting on a Train. It's just too slow for me, right now.

Moderator
PS: i haven't checked out your tunes yet, Mr. G, but will tonight. Yes, I would partake in that Chicagoland meeting of the minds - could get there reasonably easy too.
Ganderson
PS. Oh, Mr Moderator, while I’m monopolizing you thread- I’d mention to Mr. Blanc that beer and pizza in Chicagoland sounds great. I drive through there at least twice a year!
Ganderson
PS And... Early Jerry Jeff, and a band called Circus Maximus. From 1967.
https://youtu.be/4r8zZkm1vyc
Ganderson
PS. Loved Jerry Jeff. Here’s him doing Gary P Nunn’s London Homesick Blues. What with my love for western swing and related stuff I must have been a Texan in a previous life. Probably not though, as I’m not tough enough!