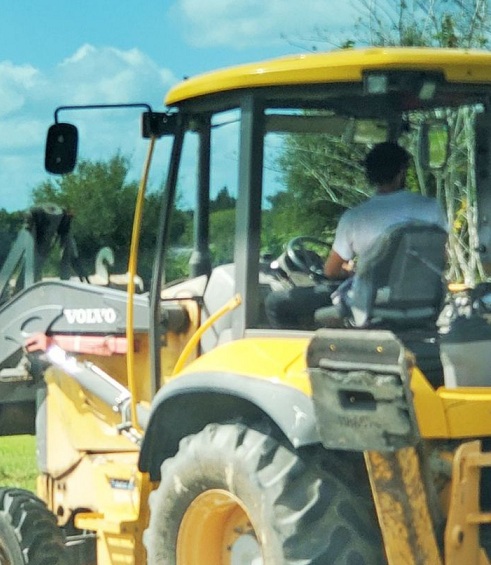 Bulldozer, back-hoe, or front-end loader, we report, you decide correct*

This is a REAL "Florida Man", people, not a Cuban, New York transplant, or redneck from another State called that due to the on-going meme. I have no problem with rednecks, and this kind of occasional drunken behavior ** is the spice of life in the South. I'm just surprised you can find a real Florida Man still up to things like this, as life is so controlled now and, the only solid Southern part of Florida left is from north of the I-4 up through Jax and west through Tallahassee.

Yahoo news (sorry about that) reports that a Backhoe thief drove through Florida town allegedly digging up Biden-Harris campaign signs*.

I don't think there is any "allegedly" to this one, but that had to be a blast for Mr. James Blight of Haines City. Yeah, it's all fun and games till you knock a (Democrat's) campaign sign down. Well, Mr. Blight had to be drunk, of course. Nowadays, a sober man, even a sober Florida Man, would not want to risk the job loss, racial harassment, and total shunning by everyone but his very close friends (plus this blogger, of course) by pissing off the Establishment with this "rampage".***

Imagine slowing down traffic, having people yelling at you left and right, but still destroying at will. What fun! Of course, if you're gonna get the signs, you've got to scoop up a little dirt, just to be sure.

"He revved up the engine and rammed the fence," Marion said. Then he saw the driver scooping up the yard and the Biden-Harris campaign sign atop it. "I thought: 'That doesn't look right,'" Marion said.

"I jumped into my truck and called 911 and followed him along, and the whole time he's riding down the road, he's yelling at people, cussing them out," Marion continued, alleging that the suspect told one person at an intersection, "I'm going to run you over."

Haha! Bad day at work, maybe the wife is in one of her moods, as a White man, you're tired of getting fucked by the Establishment left and right, and, oh yeah, you've had a few shots of whiskey....

Then during this slow-motion backhoe chase across town — cars were backed up behind the slow machine, Marion said — the suspect passed by another lawn with multiple Biden-Harris campaign signs.

"He took the front end and dropped it down and dug it up," Marion recalled. "That’s where, at the same time, he hit the 15 mph speed limit sign and knocked it down."

Right, Mr. Yahoo guy, It's not like there might happen to be more Joe Biden signs in a predominantly black neighborhood or anything, especially in a Southern State.

"He claimed he was drunk, but if he was drunk could he steal and drive a tractor right up here to this area, that's a predominantly Black area? Operating the backhoe like a normal person?" Marion said.

"I understand he was saying, 'I accidentally ran into something,' but no, you deliberately dropped your front end loader at the other house and you just scooped up in their yard, so I don't buy the drunkenness part."

See, they don’t believe that a drunk white man can dig up a yard with a front-end loader (YES, with a backhoe attachment!). Just because a drunk black man may not be able to even get the machine in gear doesn’t mean a drunk white Florida Man can’t make good use of one. You don't get out much, do ya', witness Cornelius**** Marion?

We hear from the Chief of Police of Haines City (OK, JUST south of the I-4 - about 35 miles SW of Orlando, but the real South):

“It’s absurd that a grown man could think he had the right to destroy someone else’s property based on a difference in political opinion. The fact that he was driving this heavy equipment, that he did not know how to operate, down busy roads could have been disastrous. We’re thankful that no one was hurt in this matter,” Haines City police Chief Jim Elensky said.

Ah, come off your high front-loader, Elensky. You know damn well that with enough whiskey in you, you'd have been very likely to have done the same thing. That is, unless you're NOT a real Florida Man, in which case, GTFO!


Full disclosure: I got to operate a front-end loader on a pile of gravel one time, for about 20 minutes, until my friend's sister's husband, who happened to own the machine, came back from the store. But, I'm no Florida Man. I was completely sober.

* The biggest controversy (at least in the unz comment thread I wrote on) is what is this machine? It's very obviously not a dozer. It has a wide bucket with just a wrist joint and no elbow joints on the two members, so it's for scrapping/lifting, and loading, not digging like a back-how It has outriggers, though. Are the for an attachment on the side behind the driver. There are plenty of dual use machines for both, but are the outriggers supposed .

The title has "backhoe" in it now, but has been corrected from "bulldozer". Bulldozer?! The link to the article still says bulldozer.

** I reminds me of drunkard country singer George Jones driving his riding lawnmower to the convenience story due to lack of a drivers' license, I guess to go and buy beer.

*** I really wonder how this "rampage" (the tearing up of a few lawns, knocking down a fence and a few signs, etc.) compares to even just a couple of storefront pieces of plate glass broken by peaceful rioters in Philadelphia, just for one example.

**** Possibly a black man? It's very likely with that first name.

Cloudbuster
PS: Why the heck isn't the combo machine (as used by Florida Man) called an excavator to cover it's dual functionality?

Volvo calls it a "backhoeloader":

http://www.glsplant.co.uk/volvo-bl71-370.html
Moderator
PS: Yes, I have seen plenty of the combos around, Cloudbuster. It seems like a versatile machine. Even a small one would be nice, but I'm sure, with the hydraulics and all, it'd be work to keep it running.

I had a convo. with my 9 y/o boy about it. We watched "Mighty Machines" videos over and over 3 to 4 years back, and he's got a better memory on the details. "No, it's called a backhoe" he said about what I'm calling the dual-featured machine. I'm sure that's the vernacular, so the one unz commenter was technically correct, but dammit, what the drunk Florida Man was using was the front-end-loader portion, period. It'd be much harder to have accomplished his job successfully, for the guy to have used the back-hoe attachment. I believe you, Cloudbuster, that a drunk redneck will lose his vehicular skills last, even after speech, so maybe he would have worked the outriggers and done the job proper.

One more thing. Why the heck isn't the combo machine (as used by Florida Man) called an excavator to cover it's dual functionality? That would make the most sense, but, no, my boy told me, an excavator is one of the BIG backhoe machines that is on tracks. (Is that right?) I had thought that was called a trackhoe, naturally enough.

Moderator
PS: Robert, I do remember the movie name - never saw it. Thank you for the point-out to Heemeyer's rampage. Rats! "Sharky's Machine" is not at the library. You had me psyched about it, Mr. Ganderson.
Cloudbuster
PS: Those tractors with a bucket on the front and a backhoe on the back (which is what the outriggers are for) are a really common piece of farm and earthmoving equipment. I know several people that own one. My tractor has attachments for both, though I don't happen to have either of those particular attachments. The once or twice a year I need something like that, I rent it from a local equipment rental. I figured that for what eight hours of operating time costs me, I could go about 30 years before I justified the cost of buying one.
Cloudbuster
PS: "*** I really wonder how this 'rampage' (the tearing up of a few lawns, knocking down a fence and a few signs, etc.) compares to even just a couple of storefront pieces of plate glass broken by peaceful rioters in Philadelphia, just for one example."

It was a mostly peaceful rampage and apparently while stealing Nikes from local businesses is "reparations," stealing Biden signs and some sod is some crazy thing called "vandalism!"

There ain't no justice.
Cloudbuster
PS: I have direct experience that indicates that the last thing to go on a drunk White redneck are his basic vehicular skills. Of course he can operate a front-end loader and backhoe when drunk!
Ganderson
PS Wasn’t “Sharkey’s Machine” a Burt Reynolds movie- with the very scrumptious Mrs. Bryan Brown (Rachel Ward)? Not to mention Brian (Uncle Bill) Keith. Charles Durning, and former Ram great Bernie Casey!
Robert
PS: Are the charges serious enough to keep him in the hoosegow? If so, I hope he voted early.

P.S. Back in the '70s, there was a bad movie 'Killdozer'. The movie (or the title) inspired at least three '80s bands. The first got to keep the name, one became 'Sharky's Machine' and another 'Killdozer 85' (?). If you search for 'Killdozer' now, you will get results for Heemeyer's epic rampage --- proving that, in this wonderful country of ours, even an idiot loser can achieve greatness and become a national hero.