Is it all gonna come down to Philly or Carson City?? Send lawyers, guns, and money ...

First, an apology is due to the great Peak Stupidity readers and commenters for the lack of anything, including reply comments, since Saturday. I got a little burned out for a bit.

It's been 20 years, the 2000 election, since I watched returns on TV, and I wouldn't have done it even if I could (least, at home, by the fireplace) for this one. I guess it's nice to get various Senate/House wins, additional weird-ass referenda results from California, etc. fed continually to keep one entertained.

However, I waited until about 2 hours after the east coast polls closed and then started with the PJ-Media live blog site* and then pulled up the Fox News site, which is set up pretty well. I'd rather just check things occasionally on my own. And, it's gonna be a while ...

Things looked very good at around 2 hours after E.C. poll closing, but then Wisconsin counted more of the city votes (I guess), N. Carolina and .... we've now got a bad situation in which all we can do is wait for the cheating to get done.

I had to cut off this post, after a look at the map again just now. Biden/Cameltoe have a 30,000-odd vote LEAD now in Michigan. I swear Michigan was pink a little while ago!** It had been a gap of ~400,000 votes early this morning. I knew downstate votes would come in to close the pretty big gap that Trump had, but now ... 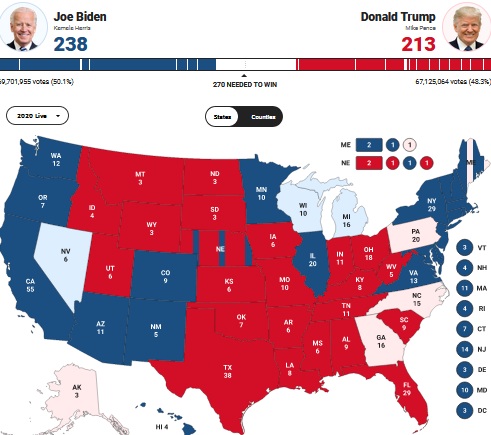 It looks to me like even without that possible 3rd D electoral vote from Maine, Trump will lose this even if he wins Pennsylvania. My post was going to be that it may all come down to how much cheating can get accomplished by the D-squad in Philadelphia. The reader may recall that this was the place where there was blatant Black Panther intimidation a few elections ago. (Man, time flies - that was in 2008!) 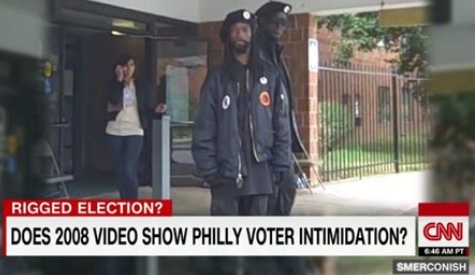 OK, the Dems only need Pennsylvania now if they somehow lost Michigan or Wisconsin, or Nevada. The gap in Nevada is only 8,400 votes right now, but that State is small in population. Doesn't anyone remember the Libertarian State of 1970's Nevada, before the huge influx of illegal replacement workers to Las Vegas and Californicators to Reno? (Peak Stupidity even mentioned this in our Part 5 of our review of the prepper novel The Mandibles.) What a shame about those 6 electoral votes from that former paradise of freedom! Sure, it would have been 3 votes, I guess, before the huge influx, but they'd have been Trump votes.

If Pennsylvania goes for Trump, should we send the lawyers, guns, and money to Carson City instead? I can imagine a shoot-out at a dusty saloon to settle this thing - it would be a lot more civilized.

I love the guitar riff in this one. Warren Zevon was a great musical artist.

* They are pretty conservative/libertarian, but the tweets are in some weird-ass order in which you keep seeing the same ones over, and the commenters seemed a bit tipsy by late night (OK, Stephen Green TOLD US he'd be drinking).

** Wisconsin has a similar gap, out of only about 60% of the voters, but I knew that this morning.

Moderator
PS: Guys, I'd really be up for that pizza and beer too. I ain't wearing no mask, so we'll see how that part goes.
Moderator
PS: Mr. Blanc, I really didn't think it would go even this well. As I'll write in a post tomorrow, even though the Hispanic vote was surprisingly not nearly as unfavorable as expected, I still think Trump (if he failed) failed by not invoking the Sailer strategy. I mean, just another 5% of white people who may have noted that 1/2 a TRILLION dollar give away to black people, because upset about something(?) is quite enough to turn some people off of the whole shebang. Really, I don't blame then at all.
Moderator
PS Thank you guys for the comments under that election day sign post. I knew our Mr. Ganderson would like the Warren Zevon song, and I am so surprised I hadn't attached that one to some other post in which it would make sense.

I hope Slow Joe makes it through 4 years, demented or not, I mean, assuming they pull this latest one. C'mon Nevada, can you please find the mother lode of Trump votes. 8,000 is all we need!
Ganderson
PS. Mr Blanc, at least next summer we can grab some Chicago style ‘za as the world falls down around our ears!
MBlanc46
PS Well, it appears that that 280–230 map that Audacious Epigone posted a few days ago might turn out to be pretty close to it. Whatever happens, the Trumpslide idea as been put to rest. I can’t imagine what space people live in who thought that was a possibility. I’m not going to squeal until I’m bit, but things are looking dim on the national above-ground politics front.
Ganderson
PS.

My mid-afternoon perusal of the news leaves me a bit more optimistic. What are the odds Slow Joe even makes it to inauguration day?