Mr. Ganderson's report from the Soviet of Massachusetts

I feel lucky to be in a State in which things are not so strict, or just people don't take things as seriously. At the auto parts store 2 days ago, I didn't wear a mask in the store, back out to mess with the car, back in again to pay ... I think everyone else did, and I am starting to give them all weird "WTF??" looks now.

Sorry, but this mask thing has been my biggest complaint about the Kung Flu PanicFest (note that almost all of the 13 Scenes from the Kung Flu Summer Re-Panic posts were about the masks). I know that the economic damage is really a much more important effect, but I believe the mask wearing is a show of compliance now. I don't know who the hell I see that is actually worried about getting COVID-19!

OK, on to Mr. Ganderson's report/rant from the Mass Soviet, written as a comment under our post We voted today. Please take the time! 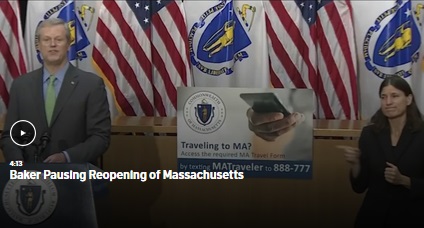 I posted this over at Hail- although I can't see it- when I attempted to post it again it said I'd already posted. Anyway folks, I'm really getting worried about the panic:

Looking at my paper this morning, it looks very much like we are heading back where we were around Eastertime- the panickers are back in control- maybe they never left, but they are intensifying their efforts to lock us all down- governments all over western Europe are locking down again, the Governor of Kansas is trying to institute a state wide, no county opt out mask requirement, people in Minnesota are talking about how 'bad' things are in South Dakota and Wisconsin DEATHS OFF THE CHARTS!!! CASES SURGING!!!

I'm taking a course online right now. (it's training to teach online, not related to Coronadoom, but though a company that's been doing online stuff for awhile)

From what I can tell a huge % of the 30 or so of us that are taking the course are panickers- I think they really believe this is the Black Death, and I have no clue how convince them otherwise. They are impervious to evidence- look at the Tweets underneath the KS governor's announcement of her attempt to mask Dorothy, Toto, Auntie Em and all the other Kansans. Some are sensible, but most are panickers.

I think what's happening is that there are largely two camps- The Black Death maskers close everything down people , and those of us like the folks that post here. We see the panickers as dangerously deluded; not stupid, because most of our cognitive elites are panickers. They see us as deniers. I don't know how else to put it, but I don't know ANYONE who doesn't think there's a rather new (how new is open to question) virus in town, which presents some public health problems to be solved. We're not deniers. But what I see from the other side is the notion that the only reason to stop these draconian measures would be no positive tests for Corona, which is INSANE. Are we going to do this for every other bug in the world?

And just to repeat myself, what do your eyes tell you? Forget about Hail's and Briggs's and Heller's fine graphs and charts, what do you see in your daily forays into the world? Are we in the first 100 pages of "the Stand?" Are there bodies stacked up? People dropping dead on the street? How many people does anyone know that's really gotten sick? Or dead? Any increase in hospital admissions, for any reason, is now cause for more draconian measures. I had thought that when the President got sick and recovered we'd be done, but it seems like the White House illnesses led almost directly to the current doubling down.

Sorry for the rambling, but I'm starting to get scared- detention camps in New Zealand, arrests in Australia- the sick level of mask compliance and panicking here in New England. The word of the day is INSANE!

If it's OK with Commenter Smith, I will put his comment reply to this in another post.

The Alarmist
PS
I’m off to a dinner party involving more than two households tomorrow evening. I will not only not wear a mask, but I will most likely hug my hostess and other female guests and shake hands with the gents. There is always the risk that the neighbors will rat us out, but we all have to make our own little stand.

What the authorities really worry about are the streets of western cities starting to look like Baghdad for their occupation forces. They didn’t ban protests involving two or more people in Iraq, but they have in London. Funny how the countries that pride themselves the most on their dedication to liberty have cracked down the hardest on their own citizenry.
Ganderson
PS our pro at my golf club informed us we are required to wear the face diaper WHILE WE PLAY!!! Thanks, Charlie!
Moderator
PS: OK, thanks, I'll put it up tomorrow. Yeah, besides the mask wearing there are those pieces of plexiglas everywhere. I find that I have to stand off to the side so we can hear each other. If anyone has any problem understanding me when I do have a mask on (job requirement, part of the time), I simply pull it off, and repeat what I had to say. Works great. I have not gotten sick!

(Don't know about the people on the other end, but if they were really worried about the COVID rather than compliance, they'd back away or move the plexiglass, as if it was a shied and they were Robert the Bruce.)
Adam Smith
PS: Good afternoon Mr. Moderator...

Around here no one wears a mask in the auto parts stores, just the dollar tree (they have a sign on the door) and the Walmart (they took their sign down weeks ago). I'd guess maybe half the people at walmart wear the face diaper, and about half of them wear it under their chin.